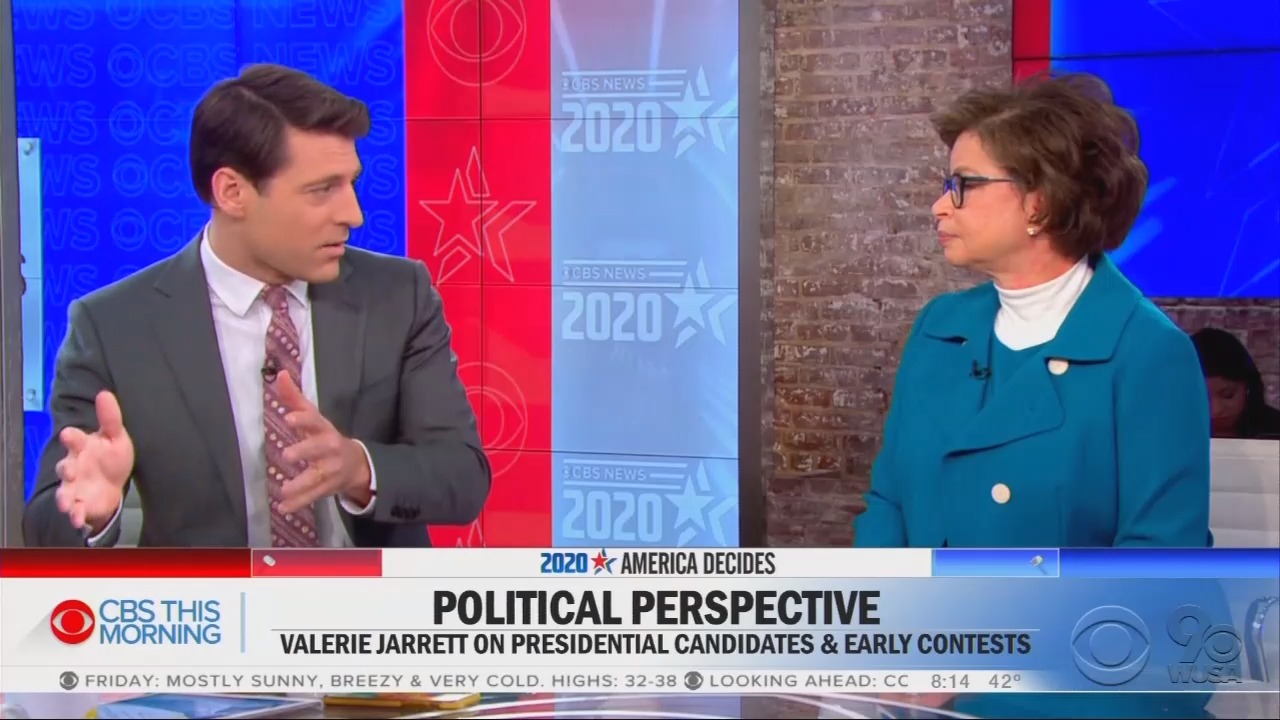 An unlikely source threw cold water on the Democratic effort (backed by the liberal media) to label all non-Bernie Sanders candidates as “moderates” or centrists. Former adviser to Barack Obama Valerie Jarrett on Thursday appeared on CBS This Morning and responded to these talking points from co-host Tony Dokoupil. According to Jarrett, there's “barely any difference” between the Democrats.

Dokoupil claimed, “We seem to have this split between candidates who are more on the progressive side, Bernie Sanders, and those that are on the moderate side, in the middle of the party. Is this split in the party, is it concerning for Democrats?”

Jarrett, who herself is not a moderate, dismissed this argument: “I think if you look at the ideology, the values, the core values of Democrats who are running, they all believe every American should have health care, it should be a right not a privilege. They all believe in a woman's right to choose.”

Continuing to point out just how liberal Mike Bloomberg, Pete Buttigieg and Amy Klobuchar are, she continued, “They believe we should have a tax system that's fair to those who are not at the top end, that creates opportunity for every young person to go to college.”

Jarrett concluded by completely destroying the media narrative: “So, if you look at the core values, there's barely any difference. The difference is between that field and President Trump.”

Some in the mainstream media are bregrudgingly admitting this. On Wednesday’s Morning Joe, Willie Geist knocked down the idea that Buttigieg isn’t progressive:

Klobuchar and Buttiegieg aggressively support abortion, tax increases and gun control. Buttigieg wants to pack the Supreme Court. (Klobuchar is open to the idea.) Moderates? Not likely. For more on their positions — and efforts to falsely paint them as moderates — see this MRC analysis by Geoffrey Dickens.

GAYLE KING: Valerie Jarrett knows a thing or two about winning elections. She was the longest serving presidential adviser to former President Barack Obama. She used her influence behind-the-scenes on the campaign trail and in the White House too. But right now she's using her influence right here at the table. Valerie Jarrett, good to see you.

VALERIE JARRETT: It’s great to be here. Thank you. Thank you all for having me.

KING: So glad you're here. They say momentum matters in all competition, all contests. When we look at momentum people are talking about Senator Sanders and Pete Buttigieg after the victories in New Hampshire and Iowa. But how influential are those victories at this stage of the game?

JARRETT: Look, we put the spotlight on those early states. We’ve had a year-long campaign. Everybody is now beginning to pay attention. A fraction, just a fraction of the delegates have been awarded, 65 out of nearly 4,000. But it does build momentum. It helps them raise money. But it's a long campaign.

KING: Should we rethink how we do this process? Should Iowa be the first?

JARRETT: I think so.  I don't think Iowa should be the first for a number of reasons. I want doesn't reflect the diversity of the Democratic Party. We should put forward a state that does. And one state shouldn't have the monopoly to go first. Why don’t we rotate around a bit? I said that to Tom Perez last week. We’ll see what happens.

KING: And how was it greeted?

JARRETT: I think everyone is rethinking it and obviously the caucuses after challenge too. It was a debacle in Iowa but maybe an. But maybe it’s an outdated system.

ANTHONY MASON: Do you think it's important to start with a single state so candidates without a lot of money have a chance to actually  make inroads?

JARRETT: I actually do. I think it's helpful to start with one state but I would rotate them and I would make sure they are diverse. Not only —  we only have 65 delegates awarded but look at the populations of Iowa and New Hampshire. Barely any people of color. So let's see what happens when we get to the rest of the field.

TONY DOKOUPIL: We seem to have this split between candidates who are more on the progressive side, Bernie Sanders, and those that are on the moderate side, in the middle of the party. Is this split in the party, is it concerning for Democrats?

JARRETT: Not for me, Tony. I'll tell why. I think if you look at the ideology, the values, the core values of Democrats who are running, they all believe every American should have health care, a right not a privilege. They all believe in a woman's right to choose. They believe we should have a tax system that's fair to those who are not at the top end, that creates opportunity for every young person to go to college. So, if you look at the core values there's barely any difference. The difference is between that field and President Trump.

DOKOUPIL: It's a pretty big tent. Alexandria Ocasio-Cortez, the freshman Congresswoman, she  said Joe Biden in another country and her would not be in the same party. That’s how much space there is between them. That's got to be troubling when you're a party trying to align for a general election and coming from two different wings?

JARRETT: I think it's actually a strength. Part of the Democratic Party being so diverse, having a bunch of range of ideas is important to the debate. Look, the primary is one thing. The general election is something else. Hillary Clinton and Barack Obama had a very spirited, long primary season. But what happened? She supported him. Not only did she support him, she rallied those who supported her to do the same in the general.

KING: Let’s talk  about Joe Biden. Has he reached out to you for advice since you know a thing or two about winning campaigns. So does he. Is he in trouble? He didn't come in third or fourth.

JARRETT: I think he would say it was a gut punch to him to lose both. He had between the leader going into today caucuses and New Hampshire. But he's also said he thinks he has a strong amount support in the African-American communities.

KING: What do you say about that?

JARRETT: We'll see. We’ll see. I think he obviously he does enjoy a great deal of support, but losing those two first races was a punch gut. But it’s not over. He has dealt with adversity in his life before and he’s pretty reliant.

MASON: You think South Carolina is pivotal for him?

JARRETT: I think it’s really important. I think it's very important that he win South Carolina.

DOKOUPIL: We see him out there campaigning. Does he look like the same Joe Biden from 2008?

DOKOUPIL: It was a long and bruising campaign. Clearly.

JARRETT: He's tough and resilient and part of the reason why I think these campaigns are terrific is because it's a test. It's a test to how resilient — what do you do when you take a punch? I remember the night President Obama lost New Hampshire. I was crushed. But what did do? He turned that night into a rallying cry to yes we can.

KING: Let's talk about Joe Biden and Mayor Bloomberg who are both using Barack Obama in their ads. When you see that do you wince a little bit or do you say, “Okay, I get it?”

JARRETT: This is what I think: I think it would be political malpractice not to use President Obama in your ad. He’s the most popular person in the Democratic Party so it doesn’t surprise me at all.

MASON: What do you make of Bloomberg's tactics here? He's avoid the first primaries. He's using a completely different play book. What do you think?

JARRETT: Well, first of all, I don't think there is a play book any more. Everything is up for grabs. I think from what I've heard is he was reluctant to get in the race and if he thought anyone in the field could beat President Trump he wouldn't have got in the race. One he waited as long as he did, he figured, “Why try to run a contest in states where I don't have infrastructure on the ground. I'll wait to Super Tuesday.” At the same time he's drumming up support from African-American mayors.

KING: You were on a call with him.

JARRETT: I had a call with him with African-American business leaders on Tuesday. He had a deal with stop-and-frisk obviously. We were very concerned about the impact that had on so many black families right here in New York. He apologized as he has done publicly and said “Look he inherited it.” It got way out of control on his watch and then he reduced it dramatically.

MASON: Were you satisfied with that apology?

JARRETT: He has a lot more to do than apology. I mean, one of the things I recommended why don't you sit down with families that were impacted by it. Even families who weren't impacted were worried about what would happen to their son. I think there's a lot more conversation to be had. He also has to make his case about what else he's done as mayor and what he's doing around the country.

KING: Before we go, because I know we’re running out of time: I'm curious about your take on Bill Barr's decision?

JARRETT: I think it's outrageous. Unprecedented to me to have an attorney general to interfere what career prosecutors do. It's troubling to me and I think it sent shockwaves throughout the agency of really competent career lawyers to wonder whether or not their boss will overturn their decision based on what looks like influence from the President.