Gayle King to Ronan Farrow: Maybe You Just Had an ‘Axe to Grind?’ 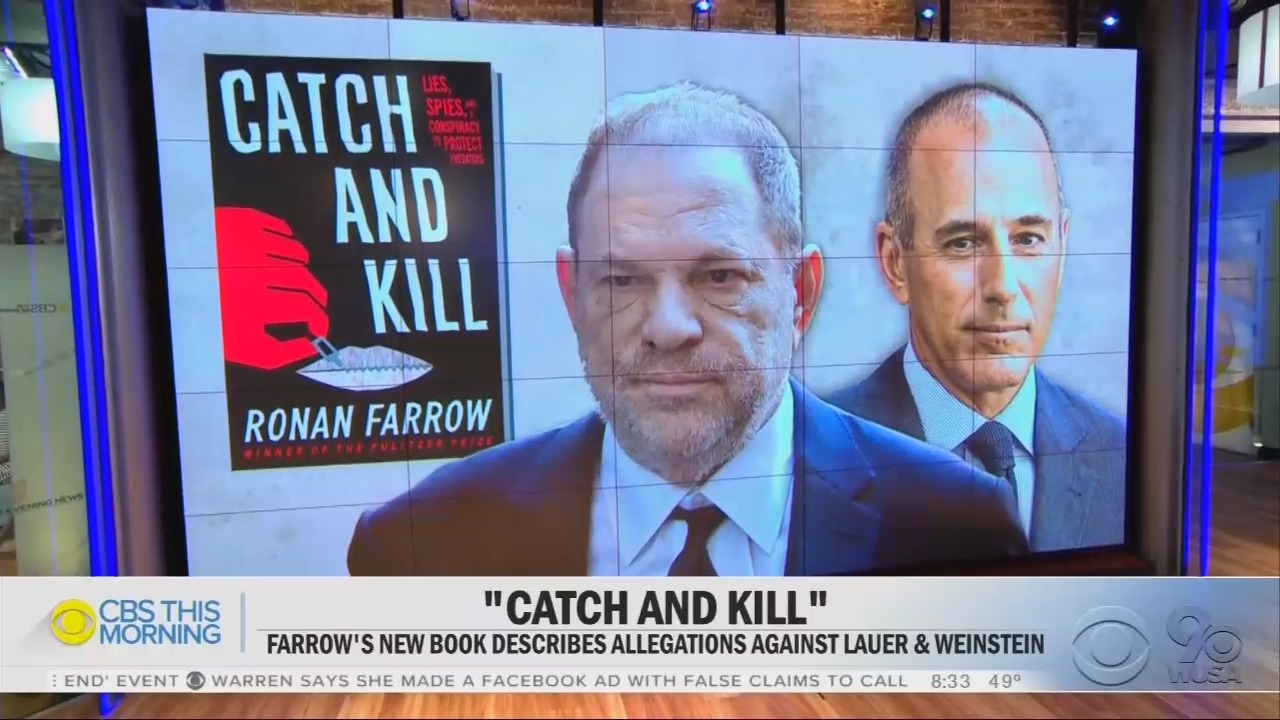 The somewhat confrontational segment featured all of the current CBS This Morning co-hosts grilled Farrow with detailed questions about his sourcing on sexual abuse claims from powerful men. While they referenced the problems at CBS, the questions came about the problems on NBC.

Regarding NBC’s refusal to proceed with Farrow’s reporting on disgraced Hollywood mogul Harvey Weinstein, Gayle King demanded, “The bulk of the book is about your efforts to tell the Harvey Weinstein story and in the end NBC killed the story saying it didn't reach their level of journalism. How do we know that this is not just —  they're saying it's an axe to grind on your part.”

Regarding the network’s own problems, Anthony Mason noted, “His Pulitzer Prize-winning reporting helped launch the Me Too movement, which inspired woman to come forward. The movement also revealed allegations against many powerful men, including Charlie Rose and Les Moonves here at CBS.”

Farrow reminded, “I appreciate is how transparent you guys have all been in confronting that after my reporting about CBS. There’s been a lot of change and I know journalists are happy about that.”

King has always been uncomfortable with her proximity to purported harasser Rose. She co-hosted with Rose during the years he allegedly harassed and abused at least 27 women. On May 3, 2018, after the scandal was exposed, King whined on-air about having to cover it: “I don't know what to say about this.... I don't know what more we can do to Charlie Rose except a public flogging. He's gone.... I’m sick of handling it.”

After some blowback, she retreated on May 4, 2018, saying of the Rose inquiry: “Let the chips fall where they may.” On July 30, 2018, CBS promoted a conspiracy theory as for the reason behind the sexual harassment allegations against CEO Moonves.

ANTHONY MASON: In his explosive book called "Catch and kill," Ronan farrow details his allegations of sexual assault in the media industry and his former bosses attempts to stifle his reporting. The book describes sexual assault allegations against disgraced Hollywood mogul Harvey Weinstein and former NBC news anchor Matt Lauer. Both men have denied any wrongdoing. In a moment, we’ll talk to Farrow about his book. His Pulitzer Prize-winning reporting helped launch the Me Too movement, which inspired woman to come forward. The movement also revealed allegations against many powerful men, including Charlie Rose and Les Moonves here at CBS.

RONAN FARROW: Good to be here.

MASON: In this statement from NBC which I should say is six pages long —

FARROW: Look, this book is an extraordinarily, meticulously fact-checked work of investigative journalism. It's two years of reporting. One of the senior fact-checkers at the New Yorker checked it. I’ll let the reporting in the book stand on its own. We’re very confident in it. And it has been amazing to see how the press has rallied around it. I think people have seen it for what it is.

MASON: What have you heard from people inside NBC?

FARROW: b There's been an outpouring of support from journalists and sources saying they, too, have stories. That's very common. All of this is honestly very common with these kind of investigative stories. When I reported those stories about CBS that you mentioned, similar campaign to undercut the reporting that revved up, and similar support that ultimately carried the day.

KING: There was always two sides to every story. I'm really curious because Matt Lauer came out with guns blazing responding to you.

KING: Made it clear from his point of view that it was certainly consensual and she was very willing. This really is a he said/she said story, Ronan, at the end of the day. The allegations about Matt Lauer. How do you decide who is telling the truth here?

FARROW: So, I think one of the transformations of recent years is that we've come to understand that I come at this from legal back background, you can corroborate allegations of sexual violence. And Brooke Nevils' story has been found credible by NBC, which took the step of firing Matt Lauer, and by me and the fact-checkers working on this. She describes an evening that marches one the time line given by others. There were eyewitnesses to what happened before and after that moment. She described this event consistently over the years. And look, it's telling that NBC News paid her a seven-figure settlement to ensure that she can't talk about what the network knew about it.

KING: I want to stop you about your fact-checking process. Because Matt Lauer's lawyer says, “Many allegations being circulated were never raised during any fact-checking process, and despite repeated requests for an advanced copy of the book, have not been provided to me.” Did you have a conversation, did you talk to Matt at any time about this—

FARROW: Look, very often without talking to Matt Lauer specifically, as you know in our profession, people will fact check or have conversations and give you the responses in an off-the-record capacity or under some other ground rule that prevents me from answering a question directly like that. However, I will say that every single individual where there's a serious allegation described against them in this book had an ample, fair window to fact check them. With respect to Matt Lauer, specifically, when you read the book, it's very clear the section is fair and even generous to him and his thinking is reflected in detail. So there was nothing surprising in that letter, except obviously ads many survivors commented on, the tone which was very angry and had menace in it, was surprising to some people.

TONY DOKOUPIL: One of the major discrepancies between what NBC is saying and what you're reporting is the question of agreements prior to Matt Lauer’s firing, apparently involving women, apparently involving misbehavior. NBC says this morning that those were completely routine, not related to sexual harassment or assault. What makes you say otherwise?

FARROW: Tony, they had a euphemism at this company called enhanced severance. And we talked to multiple people including executives on the NBC side who were involved saying these were explicitly arrangements to shut up women with allegations of misconduct in the company. That's something we saw at CBS, other media companies. It's a practice that correctly is being called into question by journalists.

MASON: They say enhanced severance was routine and was paid out to hundreds, if not, thousands of people.

FARROW: And what we document in this book is these settlements were an elevated amount that was atypical. And look, we fully include in the book their claim that it is coincidental that these women had complaints about Matt Lauer and others including executives there. The people involved say something else.

FARROW: The book is fair and generous. At every turn there was extensive fact checking to make sure every one of the rebuttals is in there —

KING: Because the Harvey story didn’t run on NBC. Ultimately, you took it to —

FARROW: Took it to the New Yorker. Obviously the producer who worked on that story had a — put out a piece in the last few days corroborating that, saying we were ordered to stop. That is the point, Gayle. There are untruths being put out by NBC, lies in the statement that wouldn't fact check. They admitted they never fact checked the memos that you referred to rebutting this. They are concealing the fact that they actively ordered us to stop. Yes, we had multiple named women
in every draft of the story. We had audio of Harvey Weinstein admitting to a crime. More importantly, they ordered us to stop. This book answers why.

DOKOUPIL: Well, they ordered you to stop. But it hasn’t stopped yet. The conversation continues. It’s ongoing.

FARROW: It’s important. And I appreciate is how transparent you guys have all been in confronting that after my reporting about CBS. There’s been a lot of change and I know journalists are happy about that.

KING: We never thought we'd be part of that story. We have made a big effort to be transparent about it.

FARROW: And you did great coverage about it. On the NBC side, there are fantastic journalists at that company.

FARROW: The book is a tribute to them. Many of them are sources in this story. They are anguished over what's happening right now and some of the lies that are being put out by their own corporate leadership and some of the executive interference in coverage. It’s a good conversation that’s happening.

DOKOUPIL: Ronan, thank you very much.