20 Years Later: CBS Wonders If Bill Clinton Is a ‘Man Who Abused His Power’

Better late than never? CBS This Morning journalists on Tuesday awoke to the idea that, when it comes to sexual abuse, Bill Clinton might be “remembered as a man who abused his power.” The morning show hosts highlighted Clinton’s train wreck book tour where the former President insisted he didn’t owe Monica Lewinsky an apology.

Instead of promoting his new novel, Clinton on Monday exploded when pressed about the Me Too movement. This Morning reporter Bianna Golodryga observed: “The questions come amidst the worldwide Me Too movement and ask whether the former president should also be remembered as a man who abused his power.”

After playing the famous 1998 clip of the then-president saying “I did not have sexual relations,” Golodryga scolded: “With that one statement about his relationship with White House intern Monica Lewinsky, President Bill Clinton set off a scandal that still follows him today.” Co-host John Dickerson reminded: “Bill Clinton's 20-year-old impeachment drama is getting a new public hearing in light of the push against sexual misconduct.” 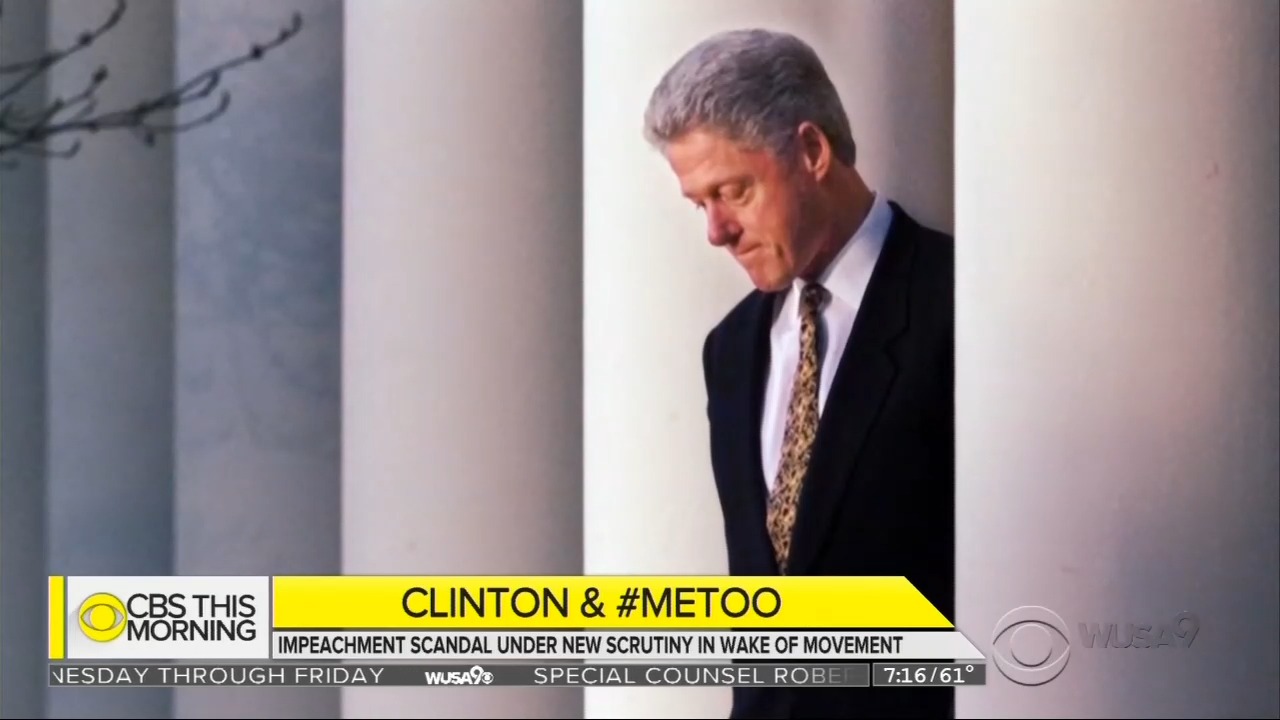 Regarding Clinton telling NBC’s Melvin that he didn’t owe Lewinsky an apology, the CBS hosts chided the Democrat, but only on for botching his answer:

BIANNA GOLODRYGA: One would think, though, going into this book tour that he may be asked this question.

GAYLE KING: That he might have been better prepared, had somewhere to go in his mind.

GOLODRYGA: Not to be so defensive. 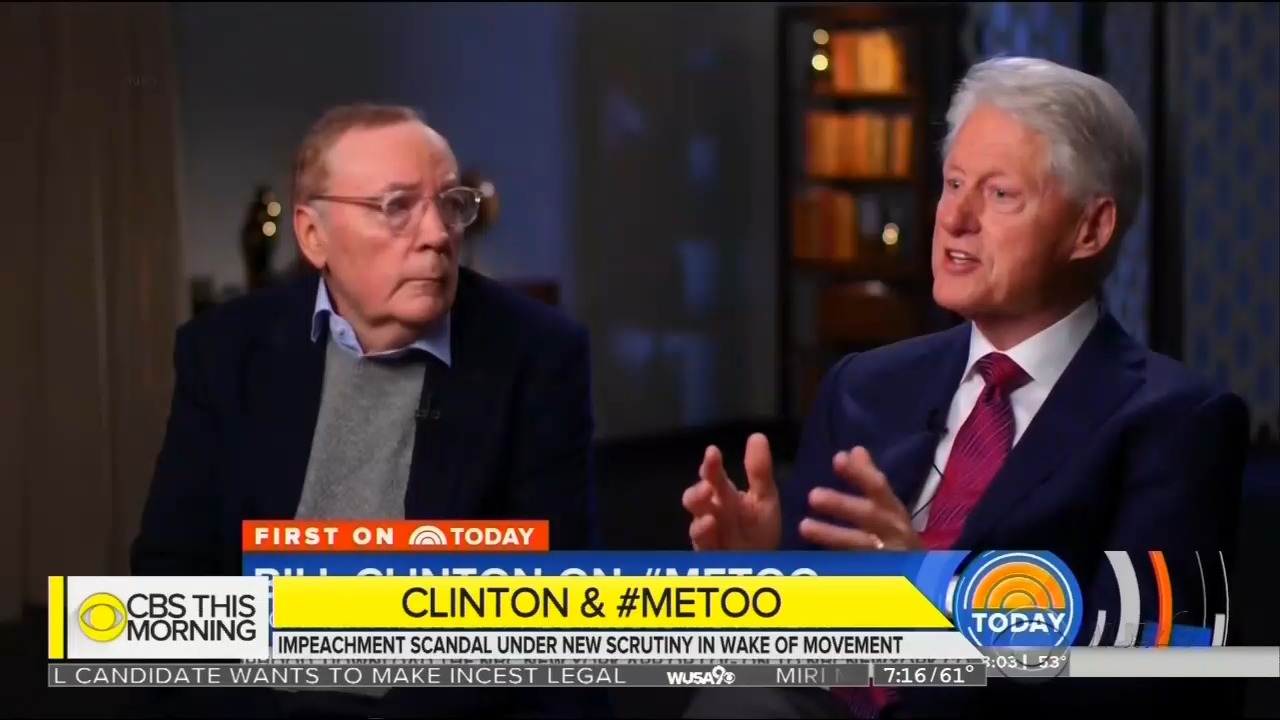 The Today show offered a full report on Clinton. Craig Melvin recounted: “During our interview, Clinton championed the Me Too movement. But his questions about Lewinsky drew backlash from his critics and some of his supporters. Now the former president is speaking out again.”

Melvin highlighted how this is a bad look for the ex-President, including this quote from former Clinton operative Joe Lockhart: “I think in that interview he succumbed to being the victim and feeling victimized.” The journalist cited a snippet of actress/activist Rose McGowan, relating that she tweeted this attack against Clinton: “a human life was altered and destroyed due to your selfishness.” 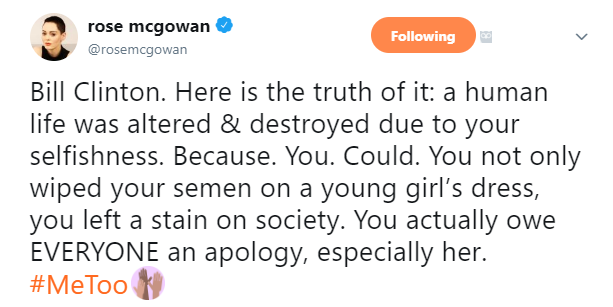 If Bill Clinton’s book tour continues to unravel in the midst of the Me Too movement, journalists should cover it. Not avert their gaze.

To see how the media covered Clinton’s sex scandals back in the ‘90s, go here.

JOHN DICKERSON: Bill Clinton's 20-year-old impeachment drama is getting a new public hearing in light of the push against sexual misconduct. The former president is starting a book tour and on it he is facing repeated questions about his White House affair with Monica Lewinsky and whether he properly apologized for it. Bianna Golodryga is here with Mr. Clinton’s attempt to clarify his response. Bianna, good morning.

BIANNA GOLODRYGA: Good morning. He became quite testy in the interview. Questions about former President Bill Clinton's conduct in the 1990s have taken over a media tour intended to promote his political thriller. The questions come amidst the worldwide Me Too movement and ask whether the former president should also be remembered as a man who abused his power.

BILL CLINTON: I did not have sexual relations with that woman.

GOLODRYGA: With that one statement about his relationship with White House intern Monica Lewinsky, President Bill Clinton set off a scandal that still follows him today.

CLINTON: I apologized to everybody in the world.

CRAIG MELVIN: You didn't apologize to her.

CLINTON: I have not talked to her.

MELVIN: Do you feel like you owe her apology?

GOLODRYGA: The former President later had to clarify his remarks.

CLINTON: The hubbub is I got hot under the collar because of the way the questions were asked. The suggestion was that I never apologized. So first point is, I did. I meant it then. I meant it now. [Cut to clip from 1998.] I have asked all for their forgiveness.

GOLODRYGA: Monica Lewinsky did not directly respond to Clinton but tweeted, "Grateful to the myriad of people who have helped me evolve and gain perspective in the past 20 years." And posted a March Vanity Fair article from which she wrote that the road to her consent to the affair was “littered with inappropriate abuse of authority, station, and privilege.” Last year on CBS This Morning, Lewinsky said there were times she thought she may not survive the public reaction to the scandal.

MONICA LEWINSKY: There was no role model. There was no playbook. No one else had gone through a public shaming online like what I had experienced.

NEW YORK TIMES REPORTERS: Is it your view that President Clinton should have stepped down at that time?

SENATOR KIRSTEN GILLIBRAND: Yes, I think that is the appropriate response.

CLINTON: Well, I just disagree with her.

GOLODRYGA: In an interview with CBS Sunday Morning, the former president called his impeachment entirely political.

CLINTON: They knew there was nothing impeachable.

GOLODRYGA: The former president did say he supports the Me Too movement, and he thinks it's long overdue. He said he has tried to support the movement in decisions and policies that he has advanced. One would think, though, going into this book tour that he may be asked this question.

GAYLE KING: That he might have been better prepared, had somewhere to go in his mind.

GOLODRYGA: Not to be so defensive.

KING: No, but he said he got hot under the collar. What was interesting is watching James Patterson sit there very uncomfortably trying to figure out “What do I say?” Even he tried to intervene. But Craig Melvin, I thought, asked some very legitimate questions.

GOLODRYGA: You could see why this was an uncomfortable issue for Hillary Clinton during the campaign, too.

JOHN DICKERSON: And it’s going to continue to be uncomfortable because there aren’t easy and simple answers.