Michigan may very well become the 24th state to adopt right-to-work legislation on Tuesday, and liberal media outlets have given its opponents ample opportunity to state their case. While proponents have not been allowed to defend the law at all, MSNBC's Chris Jansing was more than happy to briefly play "devil's advocate" with her guest on Monday -- newly elected state representative Tim Greimel who called right-to-work "too divisive and too extreme for the state."

Following his lengthy diatribe on the subject, in which he also called right-to-work the "surest path to poverty that anybody could pursue here in Michigan," Jansing invited  the Washington Post's Dana Milbank and Jackie Kucinich -- daughter of retiring liberal Rep. Dennis Kucinich (D-Ohio) -- of USA Today back on the program to reinforce the argument Greimel made. Hardly a balanced analysis of legislation designed to safeguard an individual's right not be coerced into a union or into financially supporting a union in which he/she is not a member [ video and transcript below ]

While playing devil's advocate, Jansing failed to note the sentiments of Americans who simply don't want to join a union and believe their employment shouldn't be conditioned on joining or financially supporting one. Instead, Jansing focused on how business leaders advocate right-to-work as good for job growth and economic development. That is true, but it's only half of the story and easily disputed by the Left as the interest of executives, not workers.

Turning to Milbank, Jansing wanted him to draw comparisons with what happened in Wisconsin earlier this year. Refusing to give Gov. Rick Snyder or Gov. Scott Walker any real credibility, Milbank thinks there will be an "inevitable backlash" from the voters in the future for seeking "Tea Party adulation."

Throughout their transparent attempt to join the ongoing protest in Lansing, Jansing and her guests neglected to mention a certain ballot measure that was defeated by a wide margin on election day. The "Protect Our Jobs" Amendment, otherwise known as Proposal 2 would've added the right to collective bargaining for public and private sector employees in the state constitution. It was defeated by a whopping 15 percentage point margin in spite of the coalition of unions' support and an electorate that easily re-elected Obama as well as other Democrats back to office.

The defeat of Proposal 2 arguably exemplifies the fact that the majority of Michigan's voters are ready for right-to-work and less reflexively pro-union than before, but that contradicts the narrative that MSNBC wants to run with. Michigan represents an opportunity stop the anti-union movement that somehow prevailed in Wisconsin when Gov. Walker won his recalled election decisively earlier this year.

It's obviously in MSNBC's best interest that this narrative be furthered, even if recent events point to the contrary. 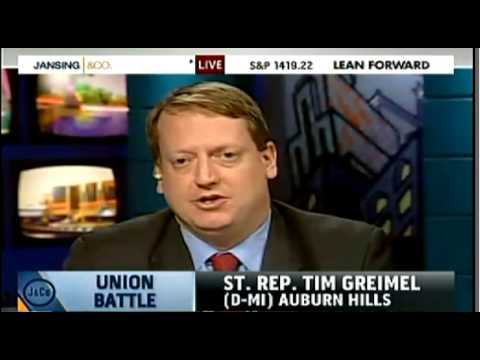 CHRIS JANSING: And in the meantime we've got the president who's continuing his PR offensive heading to Michigan to talk to voters today. At the same time, Republicans there at the state capitol are pushing right-to-work measures that would make union membership and union dues voluntary in the private sector in Michigan. Let me bring in Michigan State House Democratic Leader-Elect Tim Greimel. Good to see you, thank you so much for being with us representative.

TIM GREIMEL: Great to be on the show. Thanks for having me Christine.

JANSING: To be honest, you're up against a Republican house, a Republican senate, Republican governor Rick Snyder has changed his position. He now supports right-to-work. So what are your chances of stopping it?

GREIMEL: Well, I don't think our chances of stopping it legislatively are particularly good. You know, it's a remarkable thing where we have a governor who campaigned as a moderate who has said for over two years that this issue is 'too divisive' for Michigan. And now he's its biggest fan. So either he was lying when he called it 'too divisive' or he is by his own admission an extremist who's pushing an agenda that's too divisive and too extreme for our state.

JANSING: Well, right now as I understand it the entire Michigan federal delegation, House and Senate, those folks are meeting with Governor Snyder. Could that change anything?

GREIMEL: Well, I have heard that they're meeting with him. We'll have to see what comes of that discussion.

JANSING: Let me play devil's advocate here, and just talk about the specifics of this. Supporters say that this is going to help the state attract and keep businesses. They often point to auto suppliers, for example. Are they right about that?

JANSING: So you already would be joining, I think, 23 other states that have right-to-work in place. There was a Heritage Foundation study that found union membership fell by 15 percent in states that passed right to work. Another study from Economic Policy Institute reports that wages fell by more than 3 percent under right-to-work. Although that was less than some opponents had predicted. What do you think the impact in Michigan would be?

GREIMEL: I think the impact in Michigan is going to be the same that we've seen in all of the other states that have passed this terrible legislation. And that is we're going to see wages decline. We're going to see good benefits decline. We're going to see workplaces become less safe. The fact is that this has not been good for economic growth in any of the states that have enacted Right to Work laws. They have unemployment rates that are as high or higher than Michigan's. Pushing right-to-work is the surest path to poverty that anybody could pursue here in Michigan.

JANSING: Well there were some pretty big demonstrations last Thursday at the state capitol to protest this. Kind of reminiscent of what we saw in Wisconsin and Ohio when those states voted on these union issues. What are you expecting tomorrow? What's your prediction?

GREIMEL: I think we're going to see thousands and thousands of people here in Lansing, who are protesting not just about the substance of this terrible legislation of so-called right-to-work. But they're also very upset, and rightfully so about the lack of process and the lack of transparency that we've seen. You know, the governor said last week that he wants thoughtful discussion about this. About a day later, he decided that he was going to ram this through the legislature. They have done so by suspending the normal rules so that this matter does not need to go through the normal committee process. As a result, there's no opportunity for public input. And they voted to discharge it from committee without any committee hearings. And within 90 minutes it was passed on the floor of the state house. That is the opposite of democratic transparency. It's the opposite of any meaningful discussion or deliberative process. It's really a slap in the face to democracy to do this during the waning hours of lame duck when they're depending on the votes of people who just lost their election in November because their extremist agenda was rejected by voters. And they know that they have to do it now. They have to depend on those people who just lost votes. Because it's those people who won't be able to be held accountable by the voters in the future because they're going to be gone by the end of this year.

JANSING: Representative Griemel, thank you so much for taking the time to talk to us.

JANSING: You know, we were mentioning earlier that we saw this in Wisconsin, we saw it in Ohio last year, Dana. There was extensive coverage of what happened in Wisconsin, in part because of the governor there. But the fact that this is getting less attention this time around, is that some sort of indication that this is the way the world is going?

DANA MILBANK: You know, I don't think so necessarily, Chris. I mean, it's clear that Governor Snyder started looking for the Scott Walker prize and Tea Party adulation there. It seems to me, what happens is you do have these periodic overreaches after an election. You saw it on the other side, Republicans complained with some justification that Obama rather than focusing on the economy went ahead with Obama Care and he paid for that. I think you're going to see the same sort of backlash here where voters have been saying very clearly they want action on the economy. Now it becomes sort of an anti-union effort that has very little to do in the short term with the economy. So maybe you know, they may be able to get their right-to-work thing through there but there will be the inevitable backlash.

JANSING: It is interesting that the congressional delegation, that there are a lot of members who are there now talking to the governor. Jackie, what do you think? What's going on in that room right now?

JACKIE KUCINICH: Well I think it also varies state to state I'd like to add. Something that worked in Wisconsin won't necessarily work in Ohio. We saw that during some of the Scott Walker drama that went down. In Ohio, unions won. In Wisconsin, unions lost. Sol in Michigan, which is another union heavy state, we could see something else entirely. That said the president going there and most likely the president is going to voice his opposition to this, I think that also elevates this issue a little bit more than it would have been otherwise.

JANSING: But its also heavily symbolic, don't you think, Dana? Because Michigan was one of the grandfathers of the union movement. This is a place where I think a lot of people felt for many, many years that as challenges to unions went, this was the one that was likely to hold strong.

MILBANK: Right. It's highly symbolic to take it to the UAW right there in the heart of all their power. It's no secret that union power, particularly in the private sector, has been declining for a long period of time. But you know, the question is, less whether they can win the battle in the short term but if there's a backlash of the regular voter, non-union voter saying why are you wasting your time with this stuff?

JANSING: Dana Milbank, Jackie Kucinich -- great to have both of you. Thank you