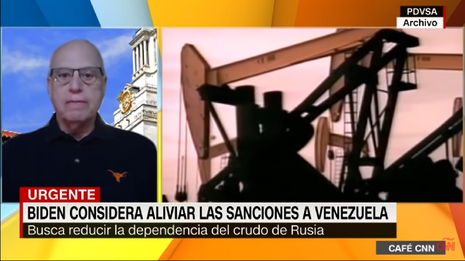 Remember how Republicans "pounced" in so many news articles that it became a laughable cliché to the extent that, in order to avoid more mockery, it was replaced by "seized?" Well, perhaps "seized" has also worn out its welcome because now Politico has a new term to mean the same as the other two: "pile."

That is the term Politico used on Wednesday to describe what those nasty Republicans are doing in reaction to Joe Biden now begging Venezuela for oil in "Venezuela talks strike political nerve in Florida."

The new P-word makes its appearance in the very first sentence written by reporter Sabrina Rodriguez:

Florida Republicans were quick to pile on the Biden administration over talks with Venezuelan leader Nicolás Maduro to potentially ease sanctions on Venezuelan oil exports.

However, when Florida Democrats expressed similar concerns, "pile" was ditched for a kinder, gentler term which appeared in the very next sentence: "expressing in a more measured way."

By Monday, top Democrats in the state also jumped into the fray, expressing in a more measured way their serious concerns over President Joe Biden’s engagement with the South American authoritarian regime.

Rodriguez then went on to portray Republicans as an opportunistic party eager to  to "pile" (formerly "pounce") on the Democrats in order to "rile up voters":

In recent years, Republicans have had political success tying state and local Democrats there to socialist leaders like Maduro. Issues surrounding Venezuela have been used to rile up voters, not just from Venezuela but also from other Latin American countries like Cuba, Colombia and Nicaragua. It was most evident in the 2020 election cycle, where Donald Trump made major inroads with Florida Hispanics after largely running a campaign painting Democrats as socialists and vowing to fight communism.

And now for a Democrat expressing opposition in "a more measured way" although it sounds just like when Republicans "pile" on Biden:

“If America was down to it’s last barrel and Venezuela was giving oil away for free, we still shouldn’t go to the Maduro regime for help,” said Democratic state Sen. Annette Taddeo, who is running for governor, in a statement.

And yet it is only Republicans that get slammed in the story with a quote from "a Venezuelan American Democratic strategist" lamenting "Republicans are really loud and they eat up the airspace" in being "irresponsible" for "denouncing communism and socialism" while supposedly not "offer[ing] up any solutions."

Yeah, the Republicans "just rattle people up" and "pile" despite some Florida Democrats basically saying the same thing. Then it is just "expressing in a more measured way."