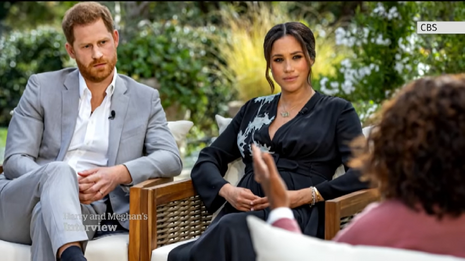 For a stark contrast to the silly fawning by much of the U.S. media over the Sunday night Oprah Winfrey interview starring Prince Harry and Meghan Markle, look no further than Good Morning Britain host (and former CNN host) Piers Morgan.

Morgan penned an acidulous takedown for the U.K. Daily Mail that even puts fury in the headline: "Meghan and Harry's nauseating two-hour Oprah whine-athon was a disgraceful diatribe of cynical race-baiting propaganda designed to damage the Queen as her husband lies in hospital - and destroy the Monarchy."

Morgan has repeatedly scorned the idea that this duo just wants their "privacy" when they can't stop granting interviews and making media deals:

Never have I watched a more repulsively disingenuous interview.

Nor one more horrendously hypocritical or contradictory.

But... but Gayle King of CBS This Morning described them as "candid."

Here we had the Duke and Duchess of Privacy flinging out the filthy family laundry for the delectation of tens of millions of people all over the world, whilst simultaneously bleating about press intrusion.

They moaned about the terrible pain of their royal titles but were also outraged their son Archie wasn't allowed to be a Prince.

They told of their constant trauma from nasty newspaper stories, but repeatedly insisted they never read any of them.

They claimed they were forced to sign gazillion-dollar deals with Netflix and Spotify because Prince Charles cut off their allowance, despite Harry inheriting millions from his late mother Princess Diana and having his entire life bankrolled by the Royal Family.

And so, it went nauseatingly on.

As Morgan later pointed out, the dreaded racism charge was thrown out there with the names conveniently left out.

Meghan told Oprah that a member of the Royal Family had queried what colour her baby would be during a conversation with Harry. In fact, she said there were several conversations, whereas he said there was only one.

But neither of them would name the offending Royal.

Harry said he would never reveal the name.

So, we're now left to view all the Royals as racists.

Nor were we given any details of exactly what was said, or in what context it was said.

How gentlemanly of deservedly unroyal Harry to leave the shadow of doubt upon all his royal relatives.

Morgan's column is a long but fascinating read as he tears apart Meghan Markle and her British consort. Here is just another tidbit of the extensive shredding:

This was the acting performance of her life, with every word, every facial expression carefully planned and choreographed.

In fact, it it's not late, someone should nominate it for the Oscars.

I mean, this is a woman who was photographed on the railings of Buckingham Palace as a starry-eyed teenager but now wants us to believe she knew nothing about the Royals and never once Googled her handsome Prince when they met.

Given these are both obvious lies, why should we believe anything that comes out of her mouth?

Ouch! But at least it is a refreshing counterpoint to the blind gushing by the American media over Meghan and Harry.