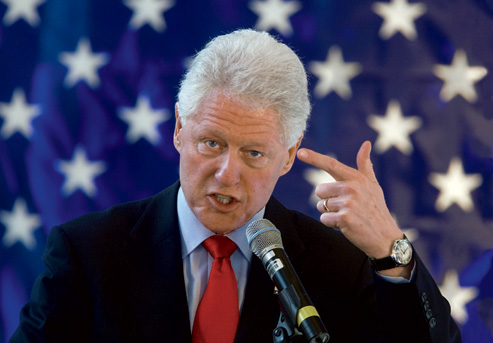 Someone that has hardly ever been accused of having a hand in what led to the tumult is former President Bill Clinton.

On Saturday, a former editorial page editor for the Wall Street Journal, George Melloan, made the connection even stronger as he pointed a finger at someone most in the media have shamelessly given a pass for his involvement in this crisis (h/t @RLMcMahon):

To promote "affordable" housing, Bill Clinton had excused the two giant government-sponsored housing finance agencies, Fannie Mae and Freddie Mac, from normal banking rules, allowing them leverage ratios far in excess of the limits on ordinary lenders. Banks were forced to write risky mortgage loans, a large number of which were then folded into mortgage-backed securities that Fannie, Freddie and others sold internationally with triple-A ratings.

This business seized up, crippling banks throughout the world, when holders began to realize that the assets that backed the securities, home mortgages, were going under water at an alarming rate.

Of course, Melloan was right. As the New York Times reported in September 1999:

In a move that could help increase home ownership rates among minorities and low-income consumers, the Fannie Mae Corporation is easing the credit requirements on loans that it will purchase from banks and other lenders.

The action, which will begin as a pilot program involving 24 banks in 15 markets -- including the New York metropolitan region -- will encourage those banks to extend home mortgages to individuals whose credit is generally not good enough to qualify for conventional loans. Fannie Mae officials say they hope to make it a nationwide program by next spring.

Fannie Mae, the nation's biggest underwriter of home mortgages, has been under increasing pressure from the Clinton Administration to expand mortgage loans among low and moderate income people and felt pressure from stock holders to maintain its phenomenal growth in profits.

Wait. It got better:

These borrowers whose incomes, credit ratings and savings are not good enough to qualify for conventional loans, can only get loans from finance companies that charge much higher interest rates -- anywhere from three to four percentage points higher than conventional loans.

Ah yes. Franklin Raines, proud of reducing down payment requirements. Wasn't that a BIG part of the problem? You bet:

In moving, even tentatively, into this new area of lending, Fannie Mae is taking on significantly more risk, which may not pose any difficulties during flush economic times. But the government-subsidized corporation may run into trouble in an economic downturn, prompting a government rescue similar to that of the savings and loan industry in the 1980's.

''From the perspective of many people, including me, this is another thrift industry growing up around us,'' said Peter Wallison a resident fellow at the American Enterprise Institute. ''If they fail, the government will have to step up and bail them out the way it stepped up and bailed out the thrift industry.''

So, back in September 1999, the Times was expressing concern that this move by Fannie Mae, prompted by pressure from the Clinton administration, could lead to a government rescue.

Yet now, almost eleven years later, the media blame Bush, Republicans, Wall Street, greed, and anybody that doesn't have a "D" next to his or her name.

One of the great ironies of our times is that the two strongest defenders of the Fannie-Freddie shell game, Chris Dodd and Barney Frank, are now in charge of reforming banking regulation.

Would this be the case if our media had been honest about the causes of the 2008 collapse when it happened?

If Dodd and Frank had "R's" next to their names, would they be at all involved in reforming banking regulation?

Maybe most importantly, how much different might the 2008 election results have been if the Obama-loving press would have told the truth about this issue before people went to the polls?