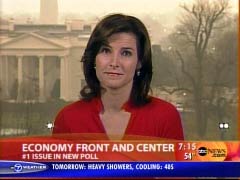 As media continue to report current economic conditions as being almost Depression-like, they conveniently forget which political party has controlled both chambers of Congress since January 2007 as well as who was in the White House when key financial services deregulation was enacted.

Such a well-timed amnesia hit ABC's Claire Shipman Sunday when during the panel discussion segment of "This Week," she blamed the current financial crisis on Republicans.

JAY CARNEY, TIME MAGAZINE: He has to make a high-profile speech about this crisis that says, "I can be a Republican who actually cares about people that are suffering through this downturn and this crisis." And that will get people's attention. I think it's now he's got the nomination, it's not too early to start remembering the middle.

CLAIRE SHIPMAN, ABC: Won't that just remind people though that Republicans were running the show when we got into this mess?

Well, Claire, as the Democrats took over Congress in January 2007, and the credit crunch started about six months later, could you tell the class what pieces of banking legislation were proposed by the majority party during this period which were designed to solve the looming financial crisis?

Oh, that's right: the Democrats spent the first year of the 110th Congress almost exclusively trying to end funding for the Iraq war.

In a related question, Claire, could you list specifically what pieces of legislation signed into law by George W. Bush precipitated the problems the financial services industry is facing today, and what Democrats did to stop their passage?

While she ponders, the reality is that many of the problems in the banking, lending, and securities industries today are tied to the Gramm-Leach-Bliley Financial Services Modernization Act which eliminated the last vestiges of the Depression Era Glass-Steagall Act.

For those that actually study such things, Glass-Steagall created legal distinctions between what banks, securities firms, and insurance companies were allowed to offer to the public as well as invest in. Gramm-Leach-Bliley removed such barriers ushering in a new era of lending and securitization partially responsible for the easy money that pumped up housing prices this decade.

This is by no means a castigation of Gramm-Leach-Bliley, as such deregulation will, in the long run, help consumers by giving them many more options that wouldn't have existed before. Unfortunately, for the time being, it appears an unbridled financial services industry has been its own worst enemy.

Yet, somehow, this is all the Republicans' fault.

As an aside, I am by no means pointing out this bill to blame our current financial woes on Democrats. Instead, I wanted to illustrate how foolish and disingenuous it is to blame it all on Republicans.