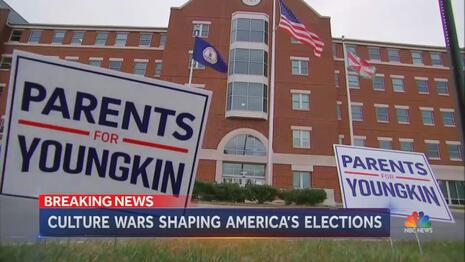 The liberal media’s immediate reaction to the left’s defeat in Virginia on Election Day was to start screaming at the state and accusing voters of forwarding a racist agenda because Governor-elect Glenn Youngkin (R) had promised to get Critical Race Theory out of schools there. But to help perpetuate the false narrative, they ignored how those same Virginia voters elected Winsome Sears (R), a black former Marine who immigrated to the U.S. from Jamaica, to be their lieutenant governor.

While ABC’s World News Tonight and NBC Nightly News avoided talking about Sear’s historic victory on Wednesday, they also perpetuated the big lie that CRT did not have an influence in Virginia schools. “[Youngkin] also tapped into frustration with COVID regulations and vowed to ban critical race theory, though it's not actually taught in Virginia public schools,” proclaimed ABC congressional correspondent Rachel Scott.

We know this to be a lie because just before the election, a Fox News investigation found a book recommended for teachers that urged them to inject CRT into their lessons. And there’s evidence that gubernatorial flunky Terry McAuliffe (D) had pushed CRT during his first stint as governor.

Of course, the media’s false narrative was that Youngkin was implicitly and explicitly tapping into “white fright” or “white fragility” to elevate his campaign; accusing him of using a “racist dog whistle” (that apparently everyone could hear) to gin up the Republican Party’s racist base. And that was supposedly his winning strategy.

Virginia voters upended those lies by electing Sears to be their lieutenant governor and the first female of color to hold a state-wide office in the commonwealth. They also elected Republican Jason Miyares, a Latino, to be the attorney general.

But that didn’t stop NBC correspondent Antonia Hylton from pushing the lie that Republicans were against diversity with opposition to CRT as their rallying cry, and spreading it across the country:

Youngkin targeting the fury over Critical Race Theory, which is not taught in Virginia schools. But the issue becoming a lightning rod for conservatives and taking center stage in school board meetings across the country, including Southlake, Texas.

NBC was back to slamming Southlake, Texas with accusation of systemic racism after parents pushed back on CRT and the nebulous “diversity training programs” the network never elaborated on.

And their fears were realized on Tuesday as a new “conservative” was elected to the school board (one with very close ties to NBC), but that didn’t stop Hylton from suggesting the candidate was fine with kids shouting the N-word:

Voters here delivered a landslide victory to conservative school board candidate to Andrew Yeager, who works in ad sales for NBCUniversal. He campaigned against the district's plan for new diversity training programs initiated after a 2018 video of students chanting the N-word went viral

“Last night's victory gives the conservative-leaning school board the power to officially kill the controversial diversity plan,” Hylton lamented, paying little mind to how she had just said he won in a “landslide.”

The only broadcast network to give Sears the credit she was due was CBS Evening News as they closed out their newscast with other historic firsts for minority candidates. “Election night ushered in a new chapter in the changing face of American politics. In Virginia … Marine veteran Winsome Sears will be the state's next lieutenant governor, the first woman to win the seat,” reported correspondent Nancy Chen.

This omission of a big win for a black Republican woman while spreading the big lie about CRT was made possible because of lucrative sponsorships from Pacific Life on ABC and Salonpas on NBC. Their contact information s linked so you can tell them about the biased news they fund.

LESTER HOLT: And you heard Kristin [Welker] mention those cultural issues Youngkin seized on that may have been key to his victory, appealing to voters concerned about schools and other issues that affect their families. Antonia Hylton has more.

ANTONIA HYLTON: In Virginia, the Democrats lost not just the election, but the culture wars, too.

GOVERNOR-ELECT GLENN YOUNGKIN: We will change the trajectory of this commonwealth.

HYLTON: Republican Glenn Youngkin winning back suburban voters. By honing in on issues like abortion, mask mandates, and education.

UNIDENTIFIED MAN: We got to make sure we have the right people doing the right things for our education.

HYLTON: Youngkin targeting the fury over Critical Race Theory, which is not taught in Virginia schools. But the issue becoming a lightning rod for conservatives and taking center stage in school board meetings across the country, including Southlake, Texas.

UNIDENTIFIED WOMAN: I don't believe in black lives matter. All lives matter. I have put three kids through school here. There’s no more racism here than anywhere else.

HYLTON: Voters here delivered a landslide victory to conservative school board candidate to Andrew Yeager, who works in ad sales for NBCUniversal. He campaigned against the district's plan for new diversity training programs initiated after a 2018 video of students chanting the N-word went viral.

NIKKI OLALYE (former Southlake student): Because you do not believe that there is systemic racism in Southlake, it does not exist. Because we know it not to be true.

Are school boards going to continue to set the tone for what we see happening in state and national-level politics?

CHUCK TODD: I think school boards are going to be the symbol of this debate. Republicans believe that the reason they made a comeback in Virginia is tackling these parental right issues when it comes to schools. So, I do think they will go full bore into that. The question I have is, how will Democrats fight back?