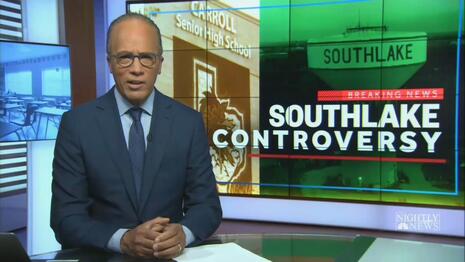 Fed-up parents made waves Tuesday after they filed a “federal civil rights lawsuit” against radical Attorney General Merrick Garland for unjustly suggesting parents protesting at school board meetings were committing “domestic terrorism.” This major development in the fight to de-radicalize liberal school boards went completely unmentioned by the evening newscasts of ABC, CBS, and NBC, just as did their weekend protest outside the Department of Justice.

Instead of reporting on the parents fighting back against the Biden administration’s tyranny, ABC’s World News Tonight was busy touting a transgendered “woman” being installed as a four-star general. On the CBS Evening News, they were hawking and huffing about cops and firefighters who would rather lose their jobs than getting vaccinated. And for their part, NBC Nightly News went the other way and touted a handful of parents and liberal teachers opposing a school board doing away with Critical Race Theory (CRT).

“Judeo-Christian public interest law firm American Freedom Law Center (AFLC) brought the suit in the U.S. District Court for the District of Columbia on behalf of parents from Saline, Mich., and Loudoun County, Va.,” reported Caroline Downey for National Review. “Both towns have developed reputations as hot spots for school board fights over equity and inclusion initiatives and critical race theory.”

Adding: “The lawsuit claims that the memo authorizes unconstitutional federal intervention in local affairs. In the filing, the AFLC attorneys point out that the unruly behavior of parents at some school board meetings, even yelling or crude language, is still protected speech under the Constitution and questions what right the federal government has to involve itself in cases where parents’ speech crosses the line into threats of violence.”

She also noted that the parents contend Garland’s order to have the FBI level it’s counterterrorism assets against American parent “is intended to chill speech.”

Meanwhile, NBC continued its months-long crusade against the Texas town of Southlake, which ousted the liberal members of the school board in an special election earlier this year. And for the second week in a row, they used one person’s gross misinterpretation of Texas law to suggest the anti-CRT board was trying to downplay the Holocaust.

“A school board meeting in Southlake, Texas, getting heated after our reporting on a top administrator's controversial comments on the holocaust caught on tape,” announced anchor Lester “fairness is overrated” Holt. “The firestorm coming after the district gained attention nationally over its diversity plan.”

While repeatedly showing off a bookcase with caution tape over it (which suggested censorship by the school board even though, in reality, it was publicity stunt pulled off by radical teachers, which was admitted last week), correspondent Antonia Hylton hyped the contentious school board meeting:

The meeting the first time residents could publicly raise concerns after the district sent teachers guidance to vet all books. Instructing them to not allow singular narratives that could be “considered offensive.”

“All of it in response to a new Texas law, prohibiting teachers from offering perspectives that could make students feel ‘anguish or guilt,’” she scoffed, omitting how it had to do with how CRT poisoned kids with racism.

Hylton once again played a highly edited soundbite of one administrator’s misinterpretation of the Texas law to suggest it was designed to downplay the Holocaust. And she once again refused to have a comment from a member of the board or a parent that opposed CRT. And they would likely declare the Loudoun County rapes story (which the networks were still ignoring) was just local news.

Then again, “fairness is overrated” for NBC.

NBC’s relentless crusade to portray opponents of Critical Race Theory as monsters while they cast aside parents fighting against radical school boards was made possible because lucrative sponsorships from GEICO and Salonpas. Their contact information is linked so you can tell them about the biased news they fund.

LESTER HOLT: Let’s turn now to new developments of a story we first brought you last week. A school board meeting in Southlake, Texas, getting heated after our reporting on a top administrator's controversial comments on the holocaust caught on tape. The firestorm coming after the district gained attention nationally over its diversity plan. Here’s Antonia Hilton.

ANTONIA HYLTON: In Southlake, tensions high yet again at a school board meeting.

JAKE BERMAN (former student): I was subject to a rash of bullying almost all of which was anti-Semitic in nature. I received everything from jokes about my nose to gas chambers.

HYLTON: Jake Berman, former Southlake student, who is Jewish, opened up about past bullying so severe he says he contemplated suicide. His parents eventually pulling him from the school.

UNIDENTIFIED WOMAN 2: The blame is right here in this room.

HYLTON: The meeting the first time residents could publicly raise concerns after the district sent teachers guidance to vet all books. Instructing them to not allow singular narratives that could be “considered offensive.”

LINDSEY GARCIA (Southlake, Texas teacher): Please help restore my faith in this district and in the school board.

HYLTON: All of it in response to a new Texas law, prohibiting teachers from offering perspectives that could make students feel “anguish or guilt.” Last week, NBC News obtained exclusive, secretly recorded audio. In it the director of curriculum Gina Peddy told educators to balance books about the Holocaust with an opposing view.

GINA PEDDY: … make sure that if you have a book on the holocaust that you have one that has opposing – that has other perspectives.

UNIDENTIFIED TEACHER: How do you oppose the holocaust?

HYLTON: Gina Peddy did not respond to messages requesting comment.

In response to Peddy’s remark, Carroll superintendent issued an apology stating there “are not two sides of the Holocaust” and pledging to work with his staff to clarify the policy. Parents expressed concern about the controversy.

KATY PRATT: The teacher who was reprimanded over the book and those teachers who recorded the training session, and the administrator are all victims of this toxic environment.

HYLTON: Berman, urging more needs to be done to protect students and teachers.

BERMAN: This is a crossroads for this state and for this district. One path is an opportunity to lead and be on the right side of history and the other will cost you and your children a quality education.

HYLTON: A message, he hopes, leads to a brighter future for all. Antonia Hilton, NBC News, New York.