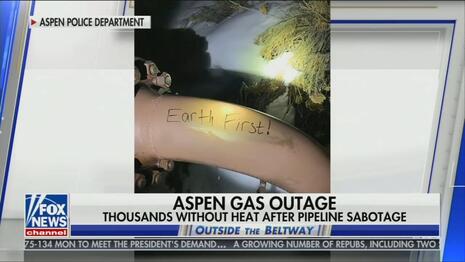 Bias by omission was the theme Tuesday for ABC, CBS, and NBC. While they ignored a dubious Democratic campaign event in Georgia and liberal California releasing sex offenders, they also turned a blind eye to an attack in Aspen, Colorado by eco-terrorists who targeted natural gas lines in the area, and killed the heat to around 3,500 customers as temperatures dropped to near ZERO with a snowstorm rolling in.

Since there’s no such thing as a right-wing eco-terrorist, the broadcast networks were trying to protect their friends in the radical elements of their ideology.

It was a good thing that Bret Baier, anchor of Fox News Channel’s Special Report delivered a news brief on the attack during his Outside the Beltway segment:

Fox 31 in Denver, where the heat is coming back on for thousands of residents in Aspen after police say there was an attack on three natural gas sites, as temperatures are forecast to fall near two degrees there. Police say “Earth first” was found written on a pipe at a natural gas pumping station near the ski resort town.

What’s even more ridiculous was the fact that ABC News actually had their own online report about the attack, and still refused to give it airtime on World News Tonight.

According to reporter Bill Hutchinson, a Pitkin County commissioner openly called what happened “an act of terrorism”:

"It’s almost, to me, an act of terrorism," Pitkin County Commissioner Patti Clapper, who lost heat in her home due to the vandalism, told The Aspen Times newspaper. "It’s trying to destroy a mountain community at the height of the holiday season. This wasn’t a national gas glitch. This was a purposeful act. Someone is looking to make a statement of some kind."

Unfortunately, he hid that comment in his very last paragraph after calling it “acts of vandalism” in his third.

Noting that the FBI’s “critical infrastructure protection unit” had joined the investigation into the “coordinated” attack, Hutchinson reported: “At one of the targeted sites, police said they found the words ‘Earth first’ scrawled, and investigators were looking into whether the self-described ‘radical environmental group’ Earth First! was involved.”

According to the FBI: “The FBI defines eco-terrorism as the use or threatened use of violence of a criminal nature against innocent victims or property by an environmentally-oriented, subnational group for environmental-political reasons, or aimed at an audience beyond the target, often of a symbolic nature.”

Hutchinson reached out to the radical group and they did not respond. He also never explained why the FBI would get involved with investigating “acts of vandalism.”

A local police official also talked with ABC about what investigators were looking at in terms of what was done to the lines:

Aspen Assistant Police Chief Bill Linn told reporters that the saboteurs appeared to "have some familiarity" with the natural gas system.

“They tampered with flow lines. They turned off gas lines," Linn said.

Instead of covering this attack by eco-terrorists, the networks boasted about President-elect Joe Biden bashing vaccine distribution efforts by the Trump administration. They also boasted about Biden’s detail-free claim he’ll vaccinate one million Americans a day in his first 100 days in office.

BRET BAIER: Fox 31 in Denver, where the heat is coming back on for thousands of residents in Aspen after police say there was an attack on three natural gas sites, as temperatures are forecast to fall near two degrees there. Police say “Earth first” was found written on a pipe at a natural gas pumping station near the ski resort town.