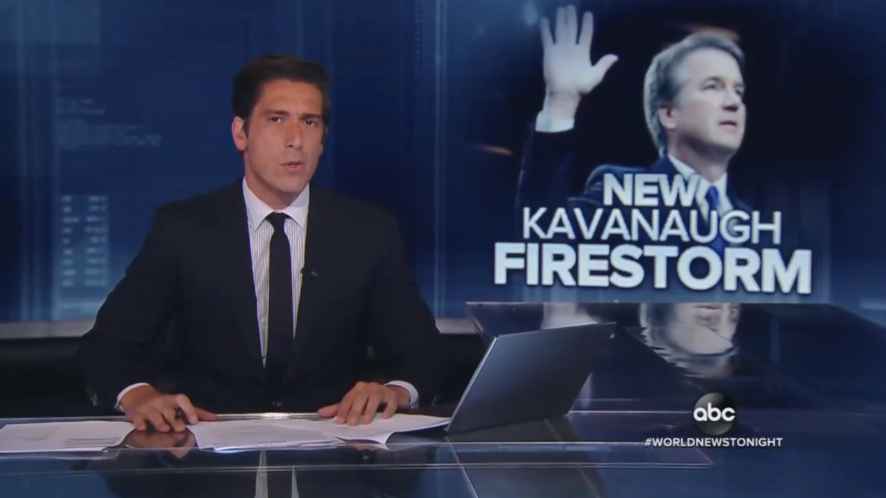 Despite the fact that the accused victim in the sexual misconduct allegations against Justice Brett Kavanaugh says she doesn’t remember anything like that happening to her, the liberal zealots at ABC News, CBS News, and NBC News pushed the poorly sources accusations for almost 30 minutes (29 minutes 26 seconds) between Sunday and Monday evenings.

This study drew its numbers from the flagship morning and evening news programs of the major broadcast networks from September 15-16, and does not include teases. Sunday morning was not included because none of them covered the accusations, which broke overnight.

NBC did a lot of heavy lifting for the anti-Kavanaugh crowd. They hoisted up the smears the most with a whopping 13 minutes and 21 seconds. Monday morning alone, they had a total of 10 minutes, 27seconds mostly driven by their exclusive interview with the dubious The New York Times reporters behind the hit piece.

Surprisingly, Monday’s NBC Nightly News didn’t touch the Kavanaugh story. Perhaps they realized it was clearly a losing battle since even The New York Times admitted their accused victim shot it down. Then, there was the newly discovered fact that a key witness of Kavanaugh accuser Christine Blasey Ford admitted she was pressured to lie by Ford’s legal team.

ABC came in second for total coverage. In all, they clocked in with 11 minutes and 23 seconds, a majority of which came on Monday (seven minutes, 27 seconds).

ABC senior national correspondent Terry Moran dismissed the fact the accused victim told friends she didn’t remember it (and The Times’s later inclusion of that fact when the paper knew it existed prior to publishing) as just something Kavanaugh’s “defenders” are pointing to, to suggest it’s a smear. He also turned a blind eye to the admission by Ford’s friend.

“The new allegation against Brett Kavanaugh reigniting the bitter partisan fight over his fitness for the nation's highest court and prompting calls for his impeachment,” Moran proclaimed. He also touted the Democratic presidential candidates questioning Kavanaugh’s legitimacy.

Meanwhile, CBS News only dedicated four minutes and 32 seconds to the anti-Kavanaugh smears. Those numbers only include Monday’s coverage seeing as Sunday’s evening news program was preempted for football.

As failing CBS Evening News anchor Norah O’Donnell began the Monday segment, the disappointment in her voice was palpable: “And tonight, it's looking unlikely that Supreme Court Justice Brett Kavanaugh will be impeached.”

Speaking publicly for the first time, to The Times reporters, Ford's close friend Leland Keyser, who Ford said was at the party, said she didn't believe Ford's account and that it “just didn't make any sense”. She also said she told the FBI that Ford's allies pressured her to say otherwise.

“Now, all four people that Ford identified as being at that high school party in the summer of 1982 have now said no such party occurred,” Crawford added.