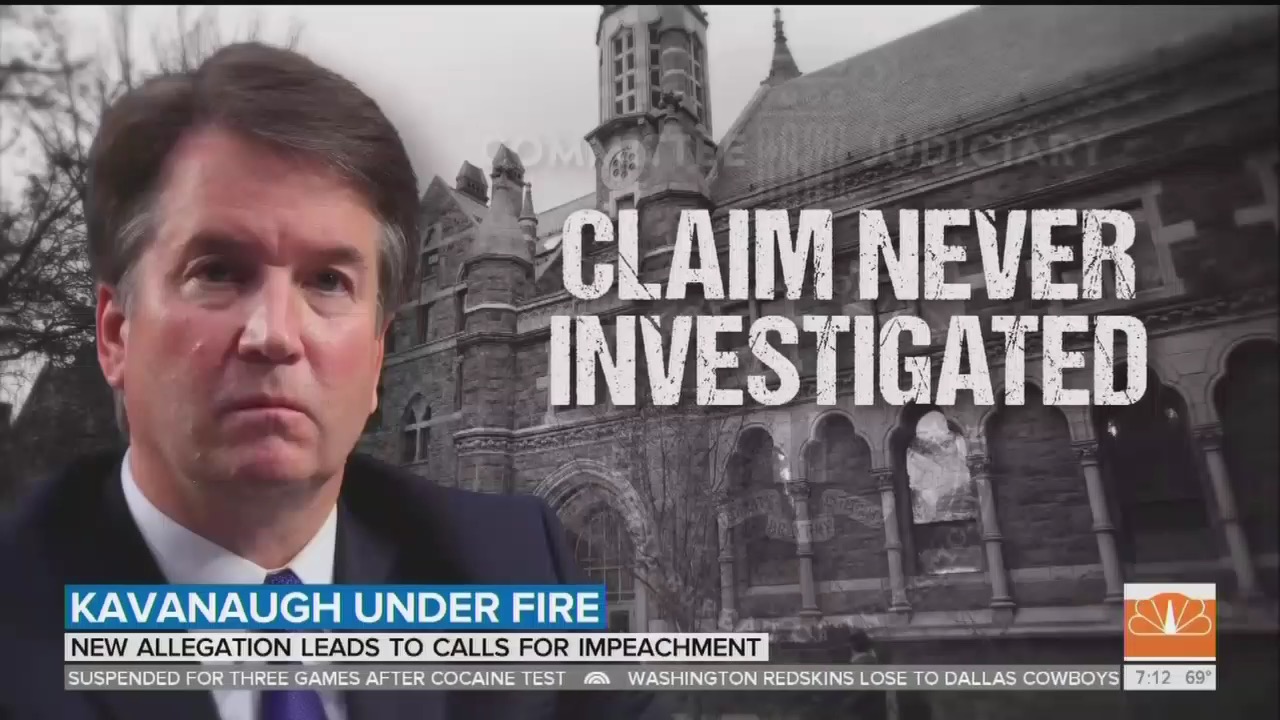 All three networks eagerly promoted a new allegation against Justice Brett Kavanaugh of sexual misconduct during his college days, published by the New York Times over the weekend. The paper’s report was an excerpt of a new anti-Kavanaugh book authored by Times reporters that largely used anonymous sources to smear the conservative, Catholic Supreme Court Justice. Nearing the anniversary of Kavanaugh’s confirmation hearing that was mired by uncorroborated accusations of attempted rape and sexual misconduct, the networks spent the morning hailing the “growing calls” by 2020 Democrats for impeachment.

NBC’s Craig Melvin led into correspondent Stephanie Gosk’s first Today report touting the push to impeach. “Supreme Court Justice, Brett Kavanaugh is facing growing calls to be impeached in the wake of a new allegation of sexual misconduct when he was a student at Yale,” Melvin led with. Gosk noted, “His lifetime appointment is now being questioned once again,” before showing excerpts of her interview with the two Times’ reporters .

Gosk’s bias towards accepting this story as factual was evident. She noted that the reporters, “both found both women [Deborah Ramirez and the newest anonymous student] to be credible,” and “how traumatic” the alleged incident was for Ramirez. She also included a soundbite of one reporter saying they had “corroborating stories” to this latest allegation. The little part about the paper waiting 24 hours to mention that student not remembering the incident seemed like an afterthought.

But on ABC’s Good Morning America, correspondent Terry Moran acted as if Republicans were the ones who were ignoring facts. Moran first gushed, “President Trump rushing to Kavanaugh's defense this weekend,” and that “Kavanaugh’s defenders” are saying that the NYT story left out “an important detail,” that the actual alleged victim does not remember the incident and won’t corroborate it:

Kavanaugh's defenders says the Times’ report adapted from a book coming out this week leaves out an important detail. The book says that the female student Stier described, quote, ‘refused to discuss the incident and several of her friends said she does not recall it.’

This seems like quite an “important detail” that ABC didn’t point out until halfway through their report. If Kavanaugh had been a Democrat appointee, they would’ve included in the headline and lede sentence of their report on this story.

In fact, Democrats’ eagerness to impeach Kavanaugh wasn’t even brought up until after Moran’s report, when anchor George Stephanopoulos noted that 2020 Democrats had “pounced” on this story, calling for Kavanaugh to be removed from office. Stephanopoulos and correspondent Mary Bruce then glumly admitted that impeachment “seemed unlikely” because of the Republican-controlled Senate.

On CBS This Morning, anchor Anthony Mason led with the impeachment demands. “At least five Democrats running for president say Supreme Court Justice Brett Kavanaugh should be impeached over the latest sexual misconduct allegations from his college years,” he stated. Laughably, correspondent Nancy Cordes gravely noted that Democrats were worried about “the integrity of Kavanaugh’s confirmation process” because “the FBI wasn’t given enough time to adequately look into his background and that allegations like this are proof.”

So Democrats basically wanted to run the Kavanaugh confirmation like the 2+ year Russia investigation farce, got it.

Cordes concluded her report in disappointment, noting that impeachment was “highly unlikely” since Republicans “still” controlled the Senate.