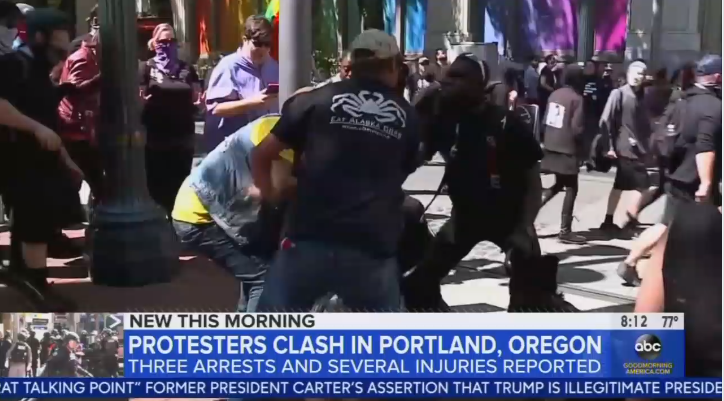 Portland, Oregon police allowed the domestic terrorist group known as Antifa to prowl their streets on Saturday were they clashed with purported “right-wing” protesters and assaulted the press. Despite putting one journalist in the hospital with a brain hemorrhage, ABC’s Good Morning America couldn’t be bothered to give the story more than 17 seconds and no mention of the journalist. NBC’s Sunday Today ignored the story altogether.

It’s really no surprise NBC would ignore this Antifa attack because they refused to report on the attack against their own reporter and crew. All ABC could muster was a news brief from co-anchor Whit Johnson, with no explicit mention of Antifa or the journalist that was viciously attacked:

In Portland, Oregon, violence in the streets as fights broke out among right-wing and left-wing protesters staging competing demonstrations. Several injuries were reported. Police used social media to declare the situation a civil disturbance. Three people were arrested on assault and harassment charges.

In reality, Quillette editor and frequent Antifa target Andy Ngo was brutally beaten and had a “cement” milkshake thrown at him.

“I just got beat up by the crowd. No police at all. Um, in the middle of the street and they stole my GoPro. And they punched me several times in my face, in my head. I’m bleeding,” Ngo told viewers on Twitter. “Where the hell where you,” he could be heard asking the Portland police when they finally decided to show up. According to Ngo in the video, he had warned police before the attack.

The attack on Ngo, a reporter who has repeatedly documented and exposed the Antifa attacks allowed in Portland, sent him to the Emergency Room and was luckily caught on video. In photos shared by Ngo, his face was swollen with a large abrasion under his left eye which was also badly bruised.

According to police, “the milkshakes thrown today during the demonstration contained quick-drying cement.” Different reports suggested that the quick-drying cement could turn the “milkshakes” into “bricks” or the chemicals involved could cause serious burns to the body.

In a tweet later that day, Ngo’s legal representation Harmeet K. Dhilllon reported that “he is being admitted to the hospital overnight as a result of a brain bleed”, or brain hemorrhage. “You sick ‘journalists’ and other hacks gloating about this should be ashamed. As for the rest, please pray for @MrAndyNgo who we need back in health — brave man,” she added.

Conservative activist and speaker Michelle Malkin came to aid of her friend and set up a GoFundMe page to pay for extra protection for the journalist.

“My friend, Portland, Oregon-based journalist Andy Ngo, was beaten and robbed today by Antifa while covering the latest paroxysms of left-wing violence. Andy has been singled out, doxxed, and targeted by SJW thugs while police stand by and do nothing,” Malkin wrote. So far, the page has raised over $90,000.

NewsBusters has extensively documented the liberal media’s combined efforts to promote, normalize, rationalize, and, when they have to, ignore the violence of Antifa terrorists. Below are several links exposing that fact:

Cuomo Justifies Antifa Violence Saying Left Has 'Morality' On Their Side

WHIT JOHNSON: In Portland, Oregon, violence in the streets as fights broke out among right-wing and left-wing protesters staging competing demonstrations. Several injuries were reported. Police used social media to declare the situation a civil disturbance. Three people were arrested on assault and harassment charges.