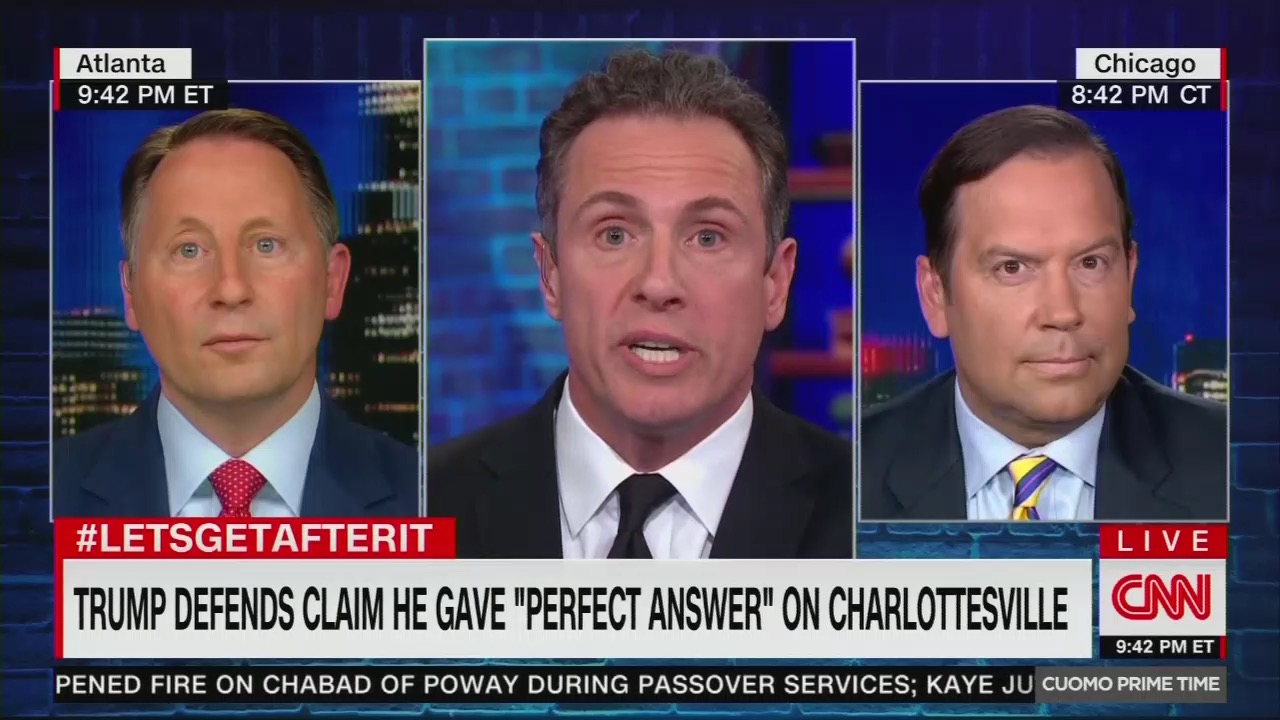 CNN primetime host Chris Cuomo took on President Trump during his Monday evening show, over the President doubling down on his Charlottesville comments and condemning Democrats’ support of late-term abortion. Cuomo expressed shock that Trump would compare abortion to murder, and adamantly defended the leftist anarchist group Antifa, saying they couldn’t be compared to neo-Nazis and were working for a "good cause."

Cuomo spent a good deal of Cuomo Prime Time arguing with Trump supporter Steve Cortes that Antifa was committed to a good cause and were morally superior to neo-Nazis. “You make a moral equivalent between those two actions, you’re making a mistake in America. The President did that!” Cuomo gushed. Cortes argued both groups were morally reprehensible. Yet Cuomo kept defending them:

“One of the groups is created to kill people they don't like. The other group and Black Lives Matter has hanger-ons and aberrant actors within their ranks but the groups were not created to destroy parts of humanity,” he gushed. Cortes reminded Cuomo that these people wear masks to conceal their identity so they can commit violence.

“You can't say they're designed to kill the people they don't like!” the CNN host insisted, adding:

"There are certainly aspects of them that are true to a cause. That is a good cause. They want social justice and whatever they want in that context,” he gushed. As the two argued, Cuomo kept insisting that Antifa wasn’t malicious:

“What I'm saying is this, you don't draw a moral equivalency between neo-Nazis and the people there to fight against them,” he said ending the segment.

In 2016, the FBI classified Antifa as a “domestic terrorist” group. Yet Cuomo keeps defending their violence as morally acceptable, even as he says he’s not doing that in the same breath.

To end his show, Cuomo berated Trump for his description of what would happen to a baby after a botched late-term abortion. Even though Trump was describing what Virginia Governor and Democrat Ralph Northam said during a radio interview in January, Cuomo reserved his outrage for Trump instead of Democrats supporting the evil practice of late-term abortion:

“Just when you think you can't be shocked. That's called homicide. It would be a murder! No law anywhere allows a newborn baby to be swaddled and killed, shame on him for even suggesting that!” he raged.