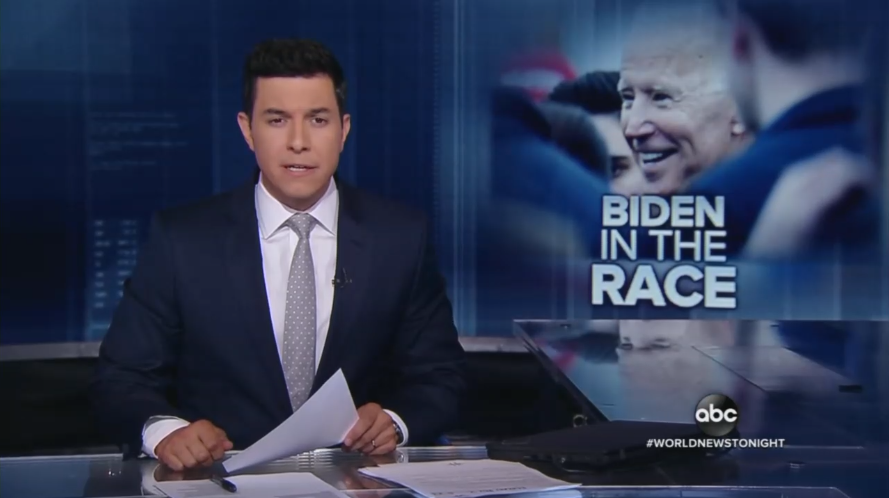 With a video trying to tie President Trump to white supremacists, former Vice President Joe Biden threw his hat into the 2020 ring Thursday. That video won him the praise of the liberal media as both CBS and NBC kicked off their evening news broadcasts with his announcement. Each of the Big Three networks boasted about the video while downplaying his inappropriate touching scandals.

“Joe Biden is in. The former Vice President is making his third presidential run, calling the Trump presidency today ‘a threat to this nation’ unlike any he's seen in his lifetime,” announced anchor Jeff Glor at the top of the CBS Evening News.

After gushing about how “Joe Biden was spotted on his beloved Amtrak train from Washington to Delaware,” CBS political correspondent Ed O’Keefe touted how Biden’s video announcement was released in both English and Spanish.

The report lasted three minutes and 17 seconds. But only 19 seconds was given to Biden’s recent inappropriate touching scandal.

For ABC, the only controversy for the former Vice President was his handling of Justice Clarence Thomas’s confirmation hearings with Anita Hill. Moran failed to mention the inappropriate touching by Biden. The total time for their report was two minutes and 45 seconds.

“Joe Biden's first campaign stop, Gianni's Pizza on his home turf in Delaware. His formal announcement an unconventional video excoriating President Trump for saying there were fine people on both sides at that deadly white supremacist rally in Charlottesville two years ago,” she bragged.

Following a soundbite of Biden declaring this was “the battle for the soul of this nation,” Mitchell proclaimed “it's a battle that's been brewing for years” as she played more soundbites of Biden and Trump sniping at each other.

Mitchell didn’t seem too concerned with the inappropriate touching by the former vice president and gave it only 10 seconds out of a total of two minutes and 55 seconds.

Almost parroting Llamas, NBC anchor Lester Holt described Biden’s announcement as, “Taking on Donald Trump straight out of the gate using the images of the ugly Charlottesville protest to draw a sharp moral distinction between himself and the President.”

TOM LLAMAS: We want to turn to politics now, and a big story in the race for 2020. Joe Biden officially announcing he's in. Taking on President Trump right out of the gate, but Biden’s long history already catching up to him. What Anita Hill had to say about their recent conversation. Here's ABC's senior national correspondent Terry Moran.

JOE BIDEN: I'm feeling great. Good to be back in Delaware.

BIDEN: We are in the battle for the soul of this nation. Everything that has made America America is at stake.

BIDEN: If we give Donald Trump eight years in the White House, he will forever and fundamentally alter the character of this nation.

MORAN: Trump's tweeted response, a taunt -- "I only hope you have the intelligence, long in doubt, to wage a successful primary campaign. But if you make it, I will see you at the starting gate!"

MORAN: Biden, who is 76-years-old, has spent half a century in politics, and this is third try for the White House. So, he brings a long track record. And a flashpoint in that record, now coming under sharp scrutiny, as Senate Judiciary Committee chairman presiding over the Clarence Thomas confirmation hearings, Biden was widely criticized for the committee's treatment of Anita Hill.

JEFF GLOR: Joe Biden is in. The former Vice President is making his third presidential run, calling the Trump presidency today "a threat to this nation" unlike any he's seen in his lifetime. That makes 21 candidates running for the Democratic nomination, the largest presidential field since we've had Democratic and Republican parties in 1856. By most early polls, including this one, Biden is the early front-runner. President Trump told us last summer he dreams about running against Biden and today welcomed him to the race, calling him "Sleepy Joe." Here's Ed O’Keefe.

Ed O’KEEFE: Hours after announcing his campaign, Joe Biden was spotted on his beloved Amtrak train from Washington to Delaware, and then, picking up pizza in his home town of

JOE BIDEN: America is coming back like we used to be—ethical, straight, telling the truth.

O’KEEFE: The former Vice President launched his campaign in English and Spanish, with a direct shot at President Trump, recalling his response to the 2017 white supremacist violence in Charlottesville, Virginia.

O’KEEFE: The President welcomed Biden to the fray with a tweet calling him "Sleepy Joe”. Last year, Mr. Trump told Jeff Glor he dreams about running against Biden.

O’KEEFE: Even before his announcement, Biden courted controversy. In the past month, eight women have come forward to say interactions with Biden made them feel uncomfortable. He responded:

O’KEEFE: But later made light of their complaints.

BIDEN: By the way, he gave me permission to touch him.

GLOR: Ed, it's so interesting to watch the different approaches here. Democrats are focusing – that are in right now – are focusing on each other, some on policy, Joe Biden is taking direct aim at the President. Why?

O’KEEFE: Because months of polling have shown that Democrats are most concerned about defeating the President. In essence, what Biden was doing today was jolting the Democratic field and reminding them, keep your eyes on the prize: the keys on the White House. While many of his opponents are floating ideas addressing the economy, health care, criminal justice reform, Biden signaled he'll get there eventually.

LESTER HOLT: The announcement was no surprise but how Joe Biden entered the race for president today turned a lot of heads. Taking on Donald Trump straight out of the gate using the images of the ugly Charlottesville protest to draw a sharp moral distinction between himself and the President. This is Biden's third try for the White House. Entering the race with more name recognition and experience than his opponents but also more baggage. Biden already facing his past calling Anita Hill, a woman thought he publicly wronged nearly 30 years ago, her response not what he expected. Andrea Mitchell has the latest.

ANDREA MITCHELL: Joe Biden's first campaign stop, Gianni's Pizza on his home turf in Delaware. His formal announcement an unconventional video excoriating President Trump for saying there were fine people on both sides at that deadly white supremacist rally in Charlottesville two years ago.

JOE BIDEN: And in that moment, I knew the threat to this nation was unlike any I had ever seen in my lifetime. [Transition] We are in the battle for the soul of this nation.

MITCHELL: It's a battle that's been brewing for years.

MITCHELL: The President firing back at Biden today tweeting, “welcome to the race Sleepy Joe, I only hope you have the intelligence, long in doubt, to wage a successful primary campaign.”

Biden is starting his third race for the White House. For now, the Democratic frontrunner because he is so well-known, but he faces big challenges. While an early supporter of same-sex marriage, many progressives criticize his 1994 crime bill, his vote for the Iraq War, his treatment of Anita Hill in the Clarence Thomas hearings.

Biden called Hill recently to express regret but she now tells The New York Times the conversation left her feeling deeply unsatisfied. Saying, “I will be satisfied when I know there is real change and real accountability and real purpose.”

More recently, even before announcing, several women complained about unwanted contact, although not sexual, which Biden tried to explain.