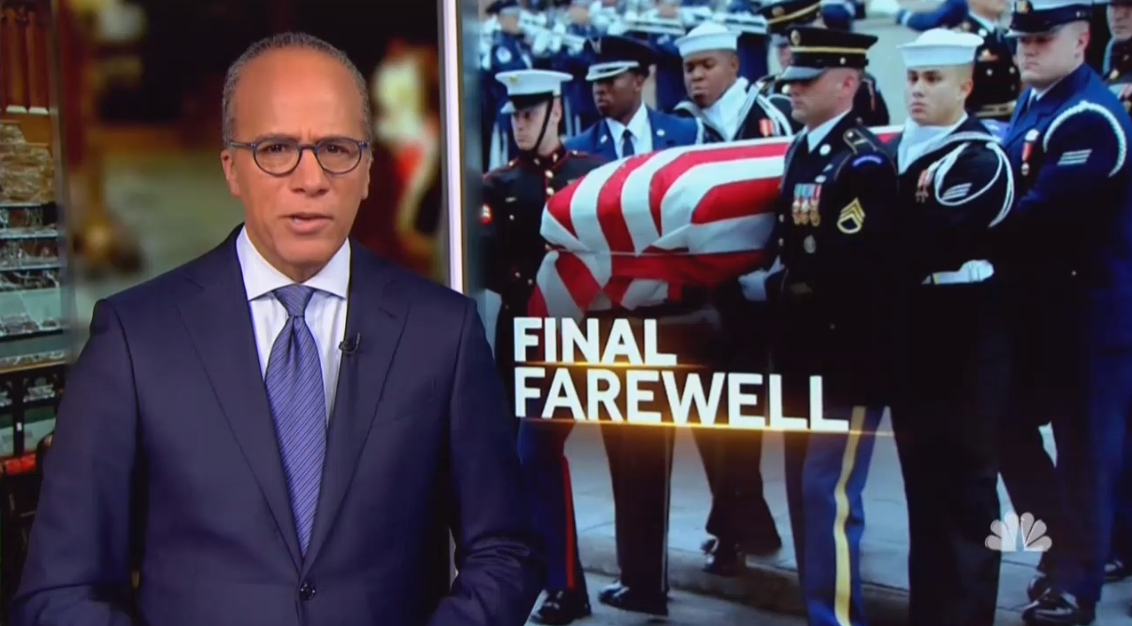 With the nation still in mourning from the passing of former President George H.W. Bush, NBC spent six minutes, 19 seconds during their Thursday evening broadcast on stories that amounted to bad news for President Trump and/or the Republican Party before they finally got around to mentioning the final day of the funeral services.

Only after that deluge (plus a report on the search for the five Marines missing off the coast of Japan after a midair collision between an F-15 and a refueling aircraft) did NBC Nightly News finally get around to the farewell for former President Bush. And when they did, they only allowed two minutes, five seconds of coverage.

In contrast, the CBS Evening News led with the continued national mourning for the late President. Like NBC, ABC's World News Tonight also delayed their Bush coverage -- but for heavy coverage of winter weather. CBS was also the only network to run two reports honoring President Bush on Thursday. They bookended the program with a report on the funeral at the beginning and a report highlighting his Thousand Points of Light charity initiative to wrap it up.

Before getting to Bush’s funeral, NBC dedicated their time to the gyrating stock market, Chinese anger over the arrest of a Huawei CEO Meng Wanzhou, how voter fraud could potentially cost Republicans another House seat in North Carolina, and a claim that the Trump Organization hired illegal immigrants. All of it bad news for President Trump or Republicans.

“Good evening. It was another day to look away, at least for the fate of heart as the stock market took investors on another stomach-churning ride,” anchor Lester Holt began the show. “The volatile swing spelling nervous times for Americans whose nest eggs are in the market. All of it driven by trade tensions with China. And now, a new flashpoint, a Chinese corporate executive arrested in Canada on behalf of the U.S.”

In their report on the apparent case of voter fraud in North Carolina, NBC correspondent Catie Beck noted that “[a]t the center of the probe, the operations of Republican consultant McCrae Dowless to collect them. He worked for Republican [candidate] Mark Harris.

Again in contrast, when CBS did their report on the apparent voter fraud, they made sure to include condemnation from state GOP Executive Director Dallas Woodhouse, who exclaimed: “All Republicans across the state are horrified by this. This is against everything that our activists stand for.”

And given the current President’s stance on illegal immigration, NBC was giddy during their report on claims the Trump organization hired illegal immigrants. “[As] President Trump continues his tough talk about controlling the flow of migrants into the U.S., two housekeepers who’ve worked at the New Jersey golf club he owns and often visits say they are undocumented,” boasted Holt.

If it was a Democratic Party president who had passed away, it’s likely NBC and ABC would have continued to lead their programs with the memorials to them. As the Media Research Center had previous documented, the liberal media also like to ignore Democratic scandals.