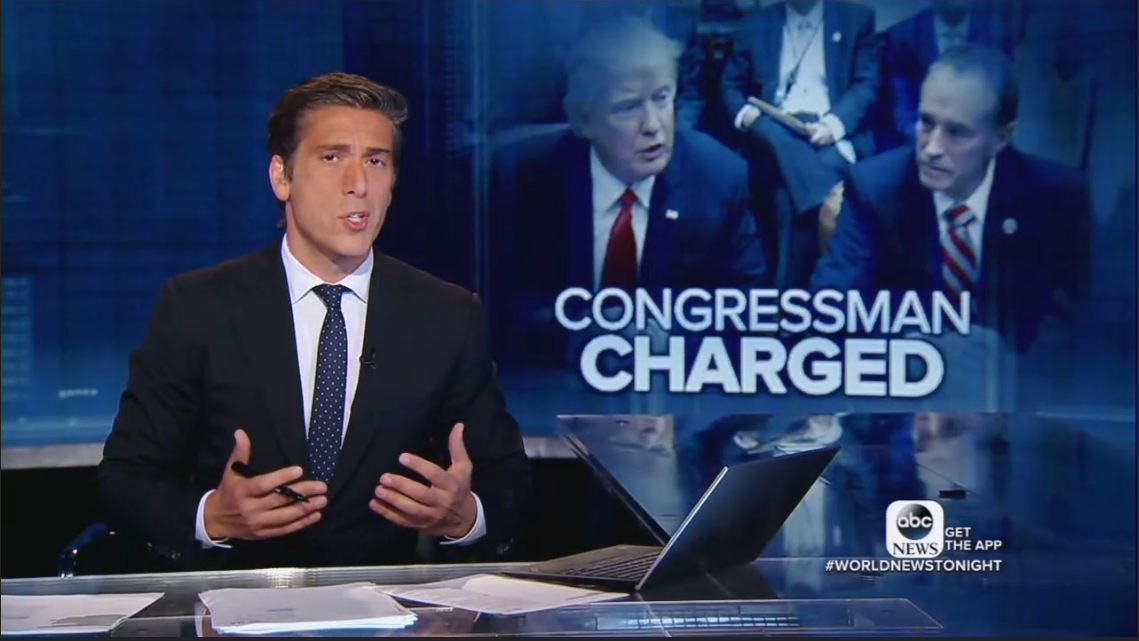 If you’re a politician with “D” at the end of your name, it grants you certain privileges from an all too friendly press. They go easy on you in interviews, give you the benefit of the doubt, and if you’re ever charged or convicted of a serious crime, they’ll mostly ignore it. This double standard was on full display Wednesday when New York GOP Congressman Chris Collins was arrested for alleged insider trading.

In all on Wednesday night, the liberal broadcast networks of ABC, CBS, and NBC dedicated a combined 7 minutes and 26 seconds on Collins’s arrest. ABC’s World News Tonight spent the most time with two minutes, 50 seconds. CBS Evening News came in second with a total of two minutes and 37 seconds, while NBC Nightly News brought up the rear with one minute and 59 seconds.

The accusations against Collins were serious and deserved to be covered fully. But this coverage exposed a blatant double standard by the liberal networks. On two notable occasions, the three major broadcast networks had either downplayed charges of corruption against Democrats or ignored the legal proceedings altogether.

In the summer of 2016, Florida Democratic Congresswoman Corrine Brown was indicted on 24 federal charges in connection to a “fraudulent education charity” she was running. At the time, the networks ignored it. And in May of 2017, when she was finally convicted on those charges, the three networks were also nowhere to be seen. The networks were also out to lunch when she was sentenced to five years in prison.

So, let’s recap: The liberal networks spent over seven minutes on just the arrest of a Republican House member, but spent zero time on the indictment through the sentencing of a Democrat. What a blatant double standard. But of course, they all made sure to note that Collins was one of the first members of Congress to endorse President Trump in the presidential election.

In another similar instance, the networks downplayed the July 2015 indictment of Pennsylvania Congressman Chaka Fattah (D) on racketeering and conspiracy charges linked to the misuse of campaign funds and federal grant money. CBS Evening News gave it a scant 22 seconds. NBC Nightly News gave it 30 seconds and had to mention that Fattah was married to a news anchor at the local NBC affiliate in Philadelphia, NBC 10. When Fattah was convicted in the summer of 2016, those networks didn’t say a word.

“In fact, the networks barely covered the entire year-and-a-half from the indictment to the conviction and sentencing of Chaka Fattah (July 2015 to December 2016). CBS and NBC morning and evening news shows only managed to mention the scandal for just over a minute (68 seconds) combined,” stated the Media Research Center’s Mike Ciandella at the time. “Meanwhile, ABC morning and evening news never gave the ordeal any coverage. Fattah, who had been in Congress for 21 years, was convicted on federal corruption charges.”

One more recap: The network with the least coverage of Collins’ arrest was NBC with one minute, 59 seconds (for one evening). NBC and CBS combined had just over a minute of Fattah coverage over the course of a year and a half. Meanwhile, ABC had nothing on Fattah and the most on Collins (nearly three minutes).

With this kind of favorable media treatment, it clearly pays to be a Democrat.