Media Out To Lunch on Fraud Indictment of Democratic Congresswoman 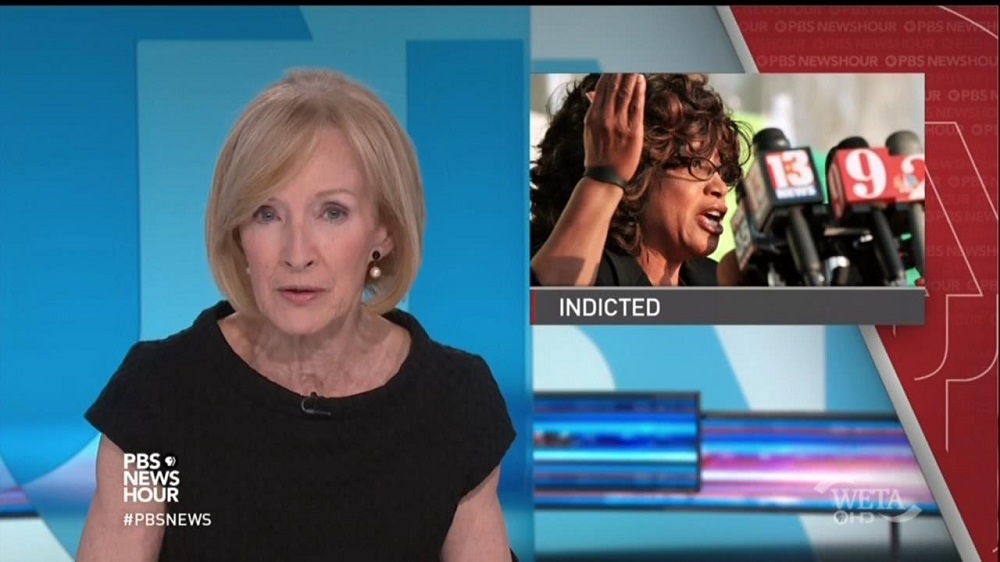 Democratic Rep. Corrine Brown was indicted on 24 federal charges on Friday related to a "fraudulent education charity," as CNN.com put it on Friday. However, viewers of CNN's on-air coverage, as well as those who watch MSNBC and the Big Three networks' morning and evening newscasts, would know nothing of this indictment, as these TV outlets have yet to cover it, as of Monday morning. Meanwhile, NBC Nightly News aired a full report on a new exhibit at a Philadelphia museum; while ABC's GMA devoted a full report on Hamilton creator Lin-Manuel Miranda's final appearance in the play.

To their credit, PBS NewsHour devoted an 18-second news brief on the fraud charges against the Florida politician:

JUDY WOODRUFF: A sitting member of the U.S. House has been indicted on fraud charges. Florida Democrat Corrine Brown and her chief of staff were charged today. The indictment says they used funds from a fraudulent charity to line their own pockets. The money was supposed to fund scholarships for poor students.

Fox News Channel's Fox & Friends aired news briefs on the Rep. Brown story during each of its three hours on Saturday. The following morning, on the FNC morning newscast, Howard Kurtz and Tucker Carlson discussed the lack of media coverage of the case. Kurtz zeroed in on how two of the largest newspapers in the country covered (or not covered) the criminal indictment. He also mentioned another recent case involving a Democratic representative [video below]:

TUCKER CARLSON: Well, Florida Congresswoman Corrine Brown was indicted on Friday for fraud, after it was uncovered that she raised $800,000 for a scholarship charity that she ended up using for a slush fund. Prosecutors say she basically looted it. But has the media been fair in covering this story? Have they covered it, really, at all? By the way, she was a Hillary super-delegate.

Host of Fox News's MediaBuzz, Howie Kurtz, joins us now to discuss. Howie, it's great to see you this morning. So—

CARLSON: She's kind of a famous person; and she was, as I said, a Hillary super-delegate; a member of Congress — accused of looting a charity. You think it would be page-one news. Was it?

HOWARD KURTZ: Not even close. I've actually done some research for you on this, Tucker. Here's yesterday's Washington Post, the hometown paper for Congress. You probably can't even see this. It's an item on an inside page in the 'Digest' column — the indictment against this Florida congresswoman. And then, in my edition of the New York Times, there is no story about Corrine Brown and her indictment in this allegedly fraudulent scheme. But the paper had room for a whole piece about a state lawmaker — former speaker of the Alabama House — getting sentenced to prison. He had already been convicted a month ago. A whole staff-written piece — this guy, Michael Hubbard, happens to be a Republican.

CARLSON: That's unbelievable! I know you worked at the Post for decades. It's my hometown paper. I'm dropping my subscription. I just think it's a ridiculous paper now. So, what about Chaka Fattah? He's a congressman from Philadelphia — kind of a good guy, actually — but a liberal Democrat; his son's in jail; he's pled guilty now to corruption — another kind of big story that I haven't seen anywhere.

KURTZ: Yeah. That's gotten a little more coverage. He's a little bit better known than Corrine Brown. But I have to say: there's one, you know, mitigating factor here — which is, you know, the insane, intense craziness of the presidential campaign has probably shrunk a lot of the news stories that would have otherwise received bigger play; and, this week in particular, with the two fatal police shootings; and then, the horror of the ambush in Dallas — that, especially on television, has soaked up all kinds of time. Then, you had Hillary and the FBI.

But all of that is not really an excuse. When members of Congress — I mean, there's a lot of corruption on Capitol Hill, but this doesn't happen every day — get indicted, get charged, that's a really significant story. And other — other than in their hometown districts, neither of these cases — happen to involve Democrats — have really gotten much media coverage.

CARLSON: It really is — especially looting a charity. I mean, that's a pretty low accusation—

KURTZ: Yeah. How low can you go?

NPR.org's Jason Slotkin reported on Friday that Rep. Brown and "her chief of staff, Elias "Ronnie" Simmons, are facing multiple counts of fraud and other charges related to an educational charity tied to the congresswoman....'prosecutors say Brown, Simmons and Carla Wiley, the head of the charity, diverted the funds to their own accounts." Slotkin noted that out of the $800,000+ raised for the bogus charity, "only $1,200 was awarded as scholarships...a large portion went onto underwriting lavish events."

On Monday, the Associated Press spotlighted how Brown "says her indictment was part of a 'very rough' week that included a black man fatally shooting five officers in Dallas and the killings in Louisiana and Minnesota of two black men by white police officers." The Florida Democrat also claimed, "I'm not the first black elected official to be persecuted and, sad to say, I won't be the last."