Don Lemon Lectures About Civility Despite His Own Rampant Incivility 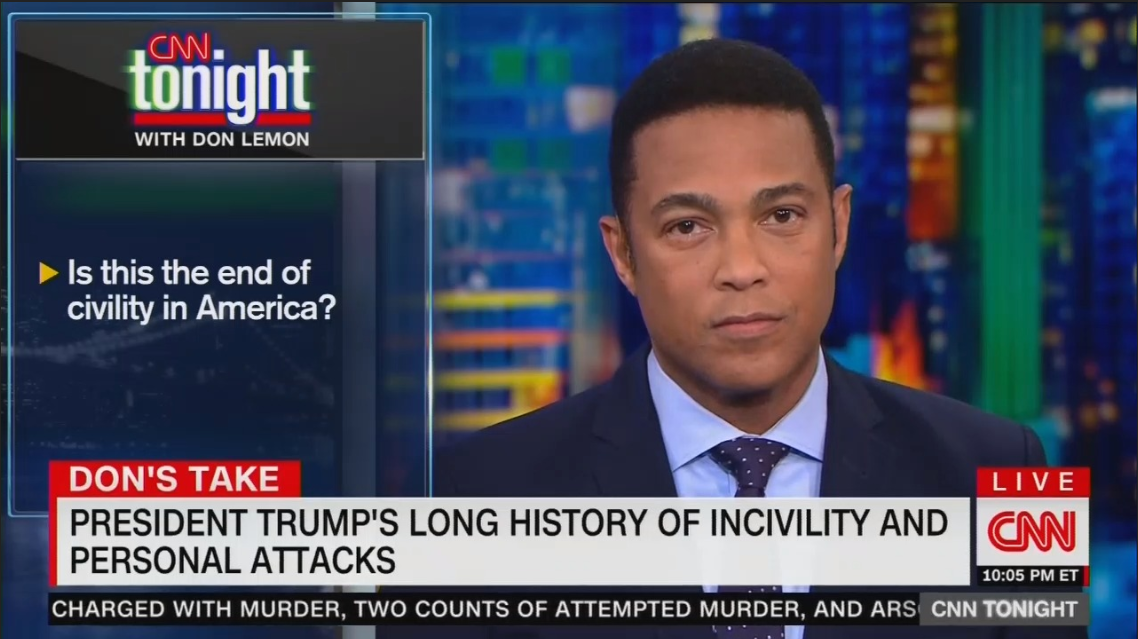 CNN Tonight host Don Lemon began Monday’s edition of the show by bemoaning the death of civility in America at the hands of President Trump: “When our own disagreements turn into personal attacks, are we playing to the hands of those who want to divide us? It is on purpose. Remember, people are doing this on purpose,” he indignantly declared.

“So, is the end of civility in America? If there was any left. Are we fanning the flames of division....Is turning incivility against the Trump administration really the answer,” he rhetorically asked. Lemon then justified harassment of Trump administration officials by describing it as the “unfortunate result” of the administration’s immigration policies and history of incivility.

It was all part of a three-minutes-plus diatribe about how it was hypocritical of the administration to complain about people being uncivil to them. Basically using a ‘they had it coming’ argument. “So, if this is the end of civility in America is anybody really surprised? But the real question for all of us is, can we turn it back around,” he opined.

But, just scrolling through the Media Research Center’s archive on Don Lemon and his show reveals that both have been a hotbed of incivility.

Just last Friday, Lemon appeared on CBS’s The Late Show and claimed white people supported Trump’s immigration policies because they were racist and fearful of losing their “privilege.” Earlier this month, he berated a conservative guest about racism and questioned their intelligence. He often insists the President is emboldening his racist supporters and smeared them as “worse than him.” And with Trump’s black supporters, he questions their commitment to the black community.

And if you disagree with Lemon on gun control, lookout, he’s coming at you with his hot takes. He once declared that teachers who wanted to carry a gun in school were “nonsensical.” He also proclaimed that if you criticized the radical anti-gun Parkland students “you are the bad guy.” His ghoulish hyperbole is often off the rails, such as when he suggested America was “a country where anybody, at any time, could be shot to death…”

Unfettered incivility is something Lemon actively cultivates among his plethora of liberal guests. He often just sits back as out of control guests like Angela Rye viciously assail what few conservative guests he does allow on. When Trump’s medical report was released back in January, he and his panel laughed about the President weight and argued it had to be a lot higher than reported.

Lemon doesn’t hide his slanted opinion about President Trump despite how he and CNN try to pretend the program is a news show. He once asserted that Trump was actually “jealous” of Obama because he could never hope to be as “classy,” “smart,” or “kind”. He even pushed a conspiracy theory about Trump’s mental health, suggesting the President was slurring his words in a speech. Last month, he proclaimed Trump was bringing about “an extreme crisis” for America. And on Monday’s show (about incivility), he described Trump as acting “extremely selfish and childlike”.

How is any of this not considered attributing to the decline of civility in America? How can he sit there with a straight face and lecture people about growing incivility? Oh… “Are we playing to the hands of those who want to divide us? It is on purpose. Remember, people are doing this on purpose.”

It all makes sense now. This is CNN.