Don Lemon Lectures Trump Base for Supporting a 'Racist:' Makes You 'Worse Than Him' 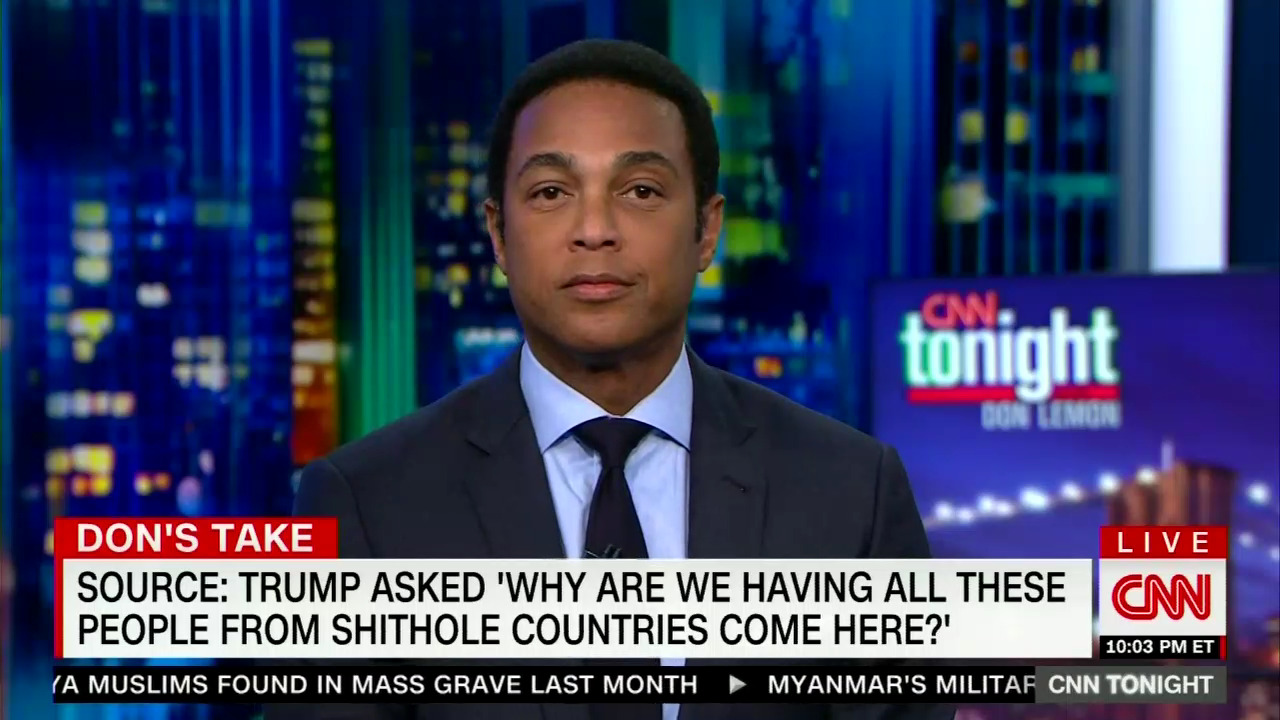 After President Trump’s leaked provocative comments about immigrants from countries like Haiti last night, the media has predictably thrown itself into a frenzied state, spending just about every waking minute of reporting on the inflammatory remark. CNN anchor Don Lemon was no different, unleashing a scathing tirade against the President to open the first hour of CNN Tonight on January 11.

Lemon held nothing back, declaring, “The President of the United States is racist,” as his opening statement. Rehashing Trump’s “shithole” comment, the CNN anchor blasted, “Those comments are frankly, disgusting. There's other language a would like to use, but we are on television.”

Lemon listed a litany of Trump’s offenses in the past two years, from spreading the Obama birtherism conspiracy, to “trashing Mexicans,” to his comments about Charlottesville protesters, to the NFL anthem controversy to making a “Muslim ban” as evidence that Trump is clearly a racist. Lemon then laid into Trump supporters as being even worse than the president.

“Tonight a White House official told CNN they're not worried, they think this is good for them and the President's comments will actually resonate with his base. Jesus,” Lemon shook his head in disgust.

“Admitting that for all their talk about making America great, the President is playing to a base that welcomes his racism and will enjoy it. That is disgraceful,” the CNN anchor criticized.

He then went after Trump’s base directly, giving them a moral sermon in what defending the president says about them:

“This is for anyone who may be taken aback by my comments. I want to be very clear here, I don't really care if you are. I hope you are,” he sneered.

Lemon said in a mocking voice, “Some of his friends are his friends in fact, and I can hear them now, telling me, ‘Oh, Don, Donald didn't mean that. Donald isn’t racist,’ or just people who don’t know. ‘ I think it was taken out of context, I'm not sure.’”

“How many examples do you need of this?” he gushed in frustration. “But he is a racist,” the anchor declared again.

Lemon then blasted critics who have called him a race-baiter in the past, saying they were guilty of the same “ignorant” “lazy” “uneducated” behavior:

“And for all of you who have uttered that tired, lazy, uninformed, uneducated, ignorant response of calling out me and others who call out racist behaviors, racist? You know what you can go do?” he lambasted. Taking a long pause, he admitted, “I can't say that.”

He then implored his detractors to go “read a history book” and learn about how these same immigrants helped build this country, brought over as slaves. He called Trump's base hypocrites, saying they were “worse” than him.

Despite his harsh rhetoric, Lemon claimed he wasn’t shocked or outraged. He admitted he already knew this was typical behavior from Trump and that “people of color” like himself had “warned” Trump’s supporters too many times before:

[P]eople of color warned you. You called us racists, or race baiters. I'm not mad you called me those things, because I'm not one of them. So why are you mad if someone calls you a racist if you know you're not one? Think about that, if you know you're not a racist, why are you mad about it, when someone calls out racism? What does that say about you? You know what those black and brown folks who you call racists are saying now? They're saying you bought, you own it.

“As we say in the South, bless your heart,” the CNN anchor said with a smug smile.