CNN: Trump Is 'Jealous' of Obama Because He’ll Never Be 'Classy' 'Smart' or 'Kind' 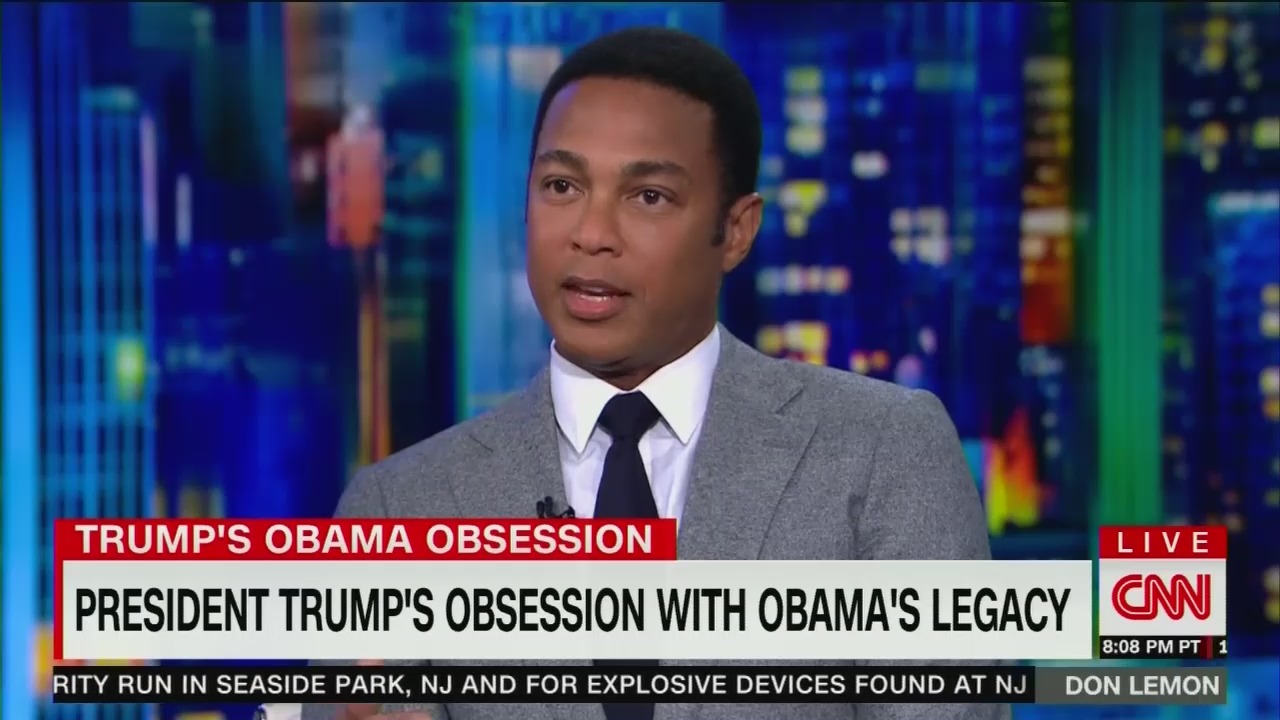 Monday evening on the final hour of CNN Tonight, host Don Lemon psychoanalyzed President Trump’s flailing answer to a reporter earlier that day about past presidents record of contacting fallen soldiers’ families. Lemon claimed Trump was “obsessed” with Obama because he could never be as “classy” “smart” or “kind” as our former president, while guest analysts Douglas Brinkley and Charles Blow repeatedly claimed Trump was racist and that was why he was “obsessed” with Obama.

That hyper-partisan analysis was in response to Monday’s press briefing, where Trump came out to the Rose Garden to answer reporters’ questions, unannounced. When asked by a reporter “why” he had not said anything about the four recently killed U.S. soldiers in Niger, Trump gave a lengthy fumbling answer, explaining he had written the families’ letters and would call them soon, when appropriate. But after this, he compared his response to past presidents, and this is the part the media seized on:

Trump’s defensive answer gave the media plenty of fodder in the hours following the briefing, as they couldn’t stop talking about the gaffe. CNN took it a step further, saying the brief moment was a sign that Trump was “obsessed” with Obama, (even adding that to their on-screen chyron.)

Anchor Don Lemon asked one of his guests for the segment, historian Douglas Brinkley, was Trump “just trying to undo former President Obama's legacy?” That gave Brinkley, who has gushed about Obama as a “scandal-free president” who was “almost unimpeachable,” the perfect setup to invoke racism:


DOUGLAS BRINKLEY: Yes because Donald Trump doesn’t have much of a legislative accomplishment this year. He has one note that’s just, beat on Barack Obama. He feels that somehow makes him feel big. It's been stunning to see what he said. I mean it started with the birther movement with Donald Trump and the the fact he's claiming that he was wiretapped by Barack Obama. And now Trump is making up things that Barack Obama wasn't caring about our soldiers that were killed in action. It's a constant trying to humiliate Obama. And I think that 30% that backs Donald Trump likes when he does that. I don't know how much racism plays into what Donald Trump does, but I think there's a large hunk of it.

LEMON: [chuckles] I'm glad you said that last part. Listen, Charles, your piece I thought was fascinating today. It's in The Times, it’s called "Trump, chieftain of spite." You said if there's a defining feature of Trump as president it is that he is an all ways the anti-Obama. Not only on policy but also on matters of propriety and polish. Trump isn't governing with a vision. He's governing out of spite. Obama’s effectiveness highlights Trump’s ineptitude and this insenses Trump. Why do you think President Trump is obsessed with his predecessor?

New York Times columnist Charles Blow agreed with Brinkley that Trump’s “obsession” was centered on his racist attitudes towards Obama:


I actually don't know. It's hard to get inside anybody's head, but you can analyze what comes out of their mouth and they do. And his obsession with Obama even predates the presidency, predates the election. It was as Douglas points out the birther thing, but it was much deeper than that. It was he didn't go to the schools that he said he went to. His book was -- the first book was too good to have been possibly been written by him --it had to be written by a white man-- I mean it was everything single thing about him and everything that went wrong, he attached it to Obama. So every time even black lives matter would protest, he would attach it to Obama. Why hasn't Obama fixed this? It’s an intense fascination with one person that is inexplicable other than to be what we think it is, which is obsessive and that the only thing he can think to do...

But Lemon didn’t think Trump’s obsession was “inexplicable.” He claimed it was jealousy, pure and simple. Lemon stated Trump could never be as “classy” “smart” or “kind” as the Obamas were so he had to disparage them out of spite:

Hold on. I don't think it's inexplicable. Have you met people that study you -- you cannot buy, no matter how much money you have, billions of dollars, you can't buy class. President Obama whatever you think of his politics, is a very classy man. He's a smart man. He's one of the kindest people you ever want to meet, he and his wife are. I'm not talking about politics. Having met them and knowing them. You can't teach that. That’s something you cannot teach. I think that's something this president is jealous about. He doesn’t have those qualities. Even with all the money in the world. It’s just not there.

Blow added that Trump never fit into the New York City elite either because he wasn’t a philanthropist, before Lemon brought it back to the racism angle:

“Douglas, you said something very interesting. I’m glad you said the last part. Is this about race. Let's be real, as a historian here,” he prompted Brinkley, who responded:

Okay, I think when you’re dealing with Donald Trump in this issue, you have to deal with race baiting, you have to look at the border wall with Mexico, the comments he said after Charlottesville, that he feels by beating up on Obama that he's scoring points with people that didn't like the idea of a first African-American president. It seems to me pure and simple, and he goes back to it time and time again.

Fellow guest Matt Lewis pushed back slightly on the racism theory, saying President Trump was obsessed with a lot of things, including Obama. Lemon agreed, saying “there’s some things you cannot teach":

“He can never have, no matter how much money, he cannot buy what Barack Obama has, and that’s class,” Lemon stated.