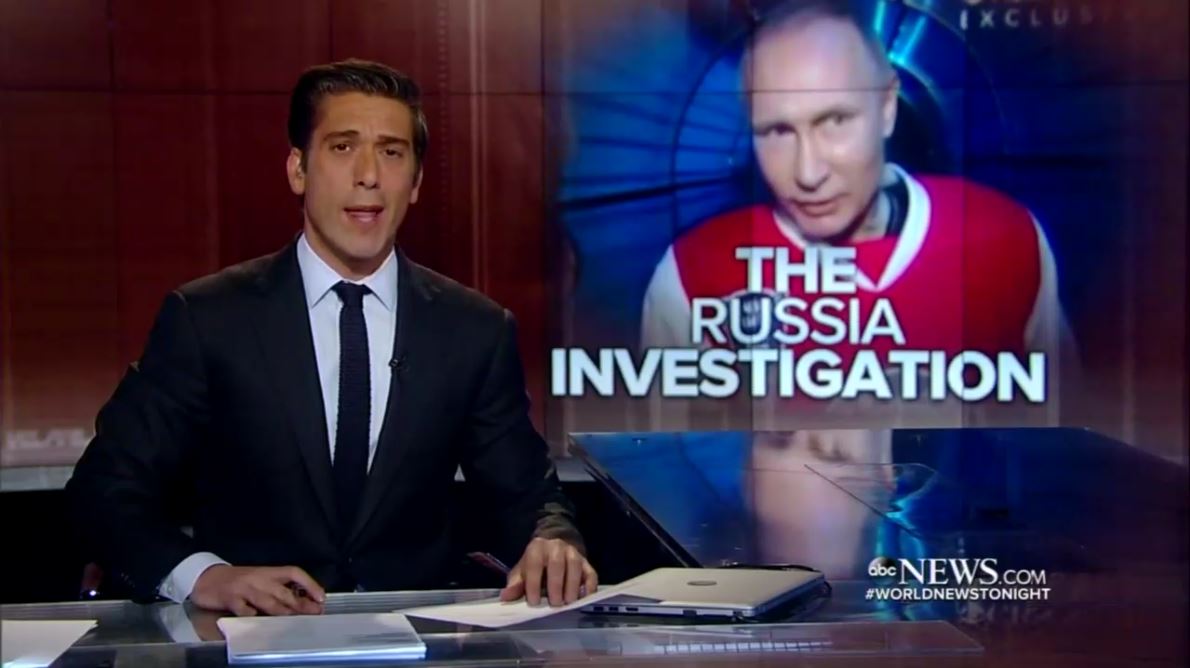 In the immediate aftermath of the firing of former FBI Director James Comey, the Big Three Networks (ABC, CBS, and NBC) didn’t quite know how to spin it. But just 24 hours later, the narrative was clear: President Trump fired Comey because the Russia investigation was closing in on him. During their Wednesday evening broadcasts, the networks spent almost two-thirds of their Comey coverage (62 percent) pushing that theory. The networks ran 40 minutes, 25 seconds of Comey coverage, and of that, they spent 25 minutes, five seconds on the conspiracy theory.

CBS Anchor Scott Pelley dove right into it at the start of CBS Evening News. “In a previous career, President Trump was a master at explaining why he fired someone, but critics are not the buying his explanation for the firing of James Comey,” Pelley chided. “The timing raises questions. Comey had just asked for more resources for his investigation of Russian interference in the U.S. election, including possible collusion by team Trump.”

They included a report by Jeff Pegues about the fate of the investigation with a heavy emphasis on worries of it ending. “James Comey's request last week for more money and resources was a sign the probe was far from over. Now sources say there is a worry the investigation, as well as separate congressional probes, will slow down,” he reported. CBS’s Elizabeth Palmer even went to Sochi, Russia to question Putin himself about what Comey’s firing would mean for U.S.-Russia relations.

In all, CBS ran 14 minutes and eight seconds worth of coverage of Comey’s firing. And of that, seven minutes and 58 seconds was spent on the conspiracy theory.

On ABC’s World News Tonight, reporter Mary Bruce leaned heavily on accusations by Congressional Democrats. “But Democrats tonight say they know why … They say it all comes down to Russia,” she stated as she led into an interview with Senator Elizabeth Warren. “It's all about Russia. It's not about Hillary. It's about the fact that James Comey is -- has an investigation going into Trump's connection and his campaign's connection to Russia,” Warren told her.

ABC’s Brian Ross, who made a name for himself pushing an unfounded conspiracy theory linking a Tea Party member to the mass shooting in Aurora, Colorado in 2012, had a new theory to peddle. This one involved speculation that the investigation now included Trump himself. “And adding to the White House concerns this week, are new indications the investigation may have expanded to include Trump's business and personal finances,” he claimed.

As evidence of his claim, he pointed to former Director of National Intelligence James Clapper who said in a recent Senate hearing that he couldn’t confirm or deny that a Trump business venture in Russia gave him concern. Ross conveniently left out the part of Clapper’s testimony where he said that there was no evidence of collusion while he held the DNI position.

In all, ABC ran 13 minutes, 32 seconds worth of coverage of Comey’s firing. And of that seven minutes, 53 seconds was spent on the conspiracy theory.

And to cap off the evening broadcasts, Anchor Lester Holt kicked off NBC Nightly News by announcing that “The White House is taking fire from inside and out tonight, over President Trump’s sacking of FBI Director James Comey; amid questions how it went down and a possible ulterior motive.”

In the first report of the evening, Justice Correspondent Pete Williams asserted that “FBI insiders tell NBC News, that many at FBI headquarter believe he was fired because he would not end the Russia investigation.” And in a later report, White House Correspondent Kristen Welker declared: “Amid mounting outrage on Capitol Hill tonight, some lawmakers are questioning the country's very foundation.” She also asked Democratic Senators leading questions on the topic by inquiring if they view the firing as a “constitutional crisis.”

In all, NBC ran 12 minutes, 45 seconds worth of coverage of Comey’s firing. And of that, nine minutes, 13 seconds was spent on the conspiracy theory.

So far, there is no evidence that their claim linking Comey’s firing to the Russia investigation is true. Only time will tell if that is truly the case, but for now, they are spending an outsized amount of time pushing it as a fact.