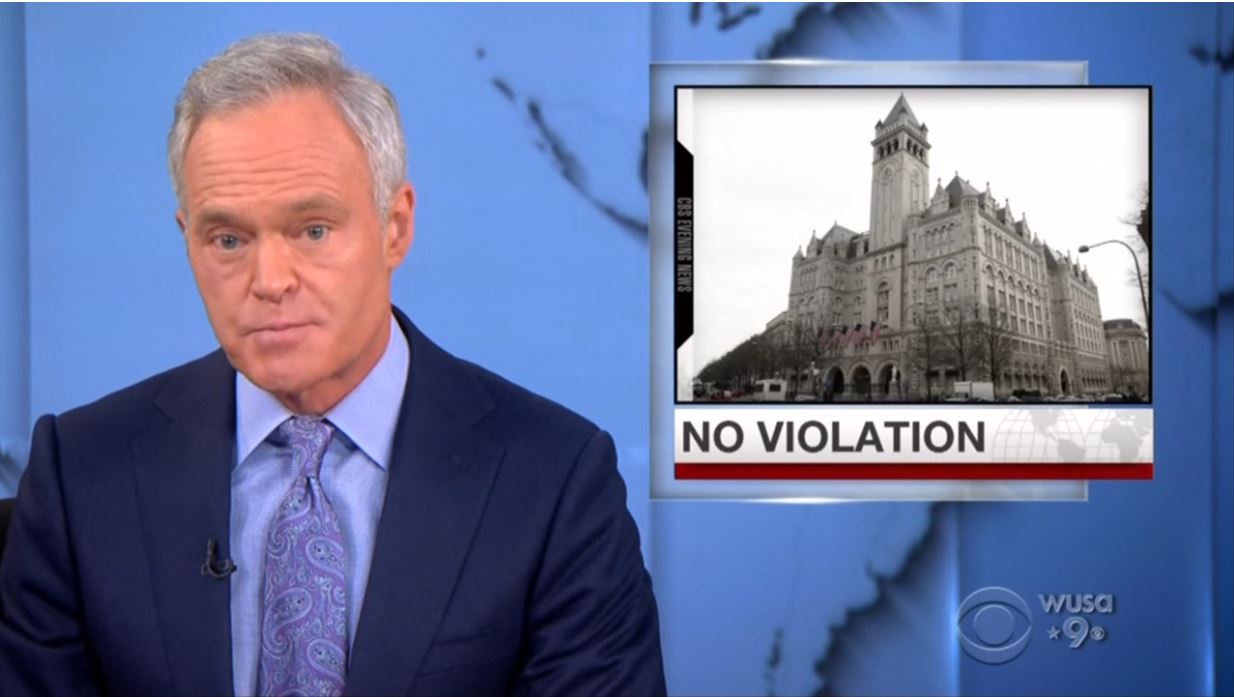 Ever since Donald Trump was elected President of the United States, the liberal media has been harping on the D.C. hotel that bears his name. The concern is that Trump is violating the leasing contract of the historic post office owned by the federal government, which says a public official cannot profit from the property. But according to a news brief by anchor Scott Pelley on CBS Evening News on Thursday, that’s no longer an issue for the President, a fact that was omitted by both ABC and NBC.

“Today a federal agency ruled that President Trump's hotel at a historic former post office building in Washington is not violating its lease,” reported Pelley. “The lease prohibits government officials from profiting from the property, but the General Services Administration says there is no violation because the President has transferred his businesses to his children and will not get any money from the hotel.”

Being that the decision by the GSA is supported by the fact that Trump’s sons now run his business, it may put to rest cries of “conflict of interest.” In addition, it could possibly mean that Trump is not in violation of the emoluments clause of the constitution as well.

Suggestions of such impropriety have been a staple of the liberal media for a while. Back in December on ABC’s World News Tonight, reporter Brian Ross ambushed officials from Bahrain and demanded to know if they were trying to buy favor with the incoming president. “The wealthy kingdom of Bahrain certainly has good reason to court the incoming Trump administration,” he declared, “Its human rights record has been harshly criticized. Accused of torture, even threats of rape and other violence against political opponents.”

The day before his inauguration, ABC’s Cecilia Vega took issue with the fact that Trump liked to visit the location. “That new $200 million hotel just a few blocks from the White House already the subject of controversy,” she stated, “With questions swirling about Trump's deep ties to his brand and family business. So will these visits continue?”

Three days after the inauguration, Vega hyped that Trump could be facing a potential lawsuit. “A liberal watchdog group planning to sue the President alleging he is violating the constitution by allowing his businesses like his new hotel in Washington, D.C. to accept payments from foreign governments,” she touted.

And while waiting for Trump to arrive at an inaugural ball on NBC Nightly News, reporter Katy Tur hammered the new President for owning the facility:

Donald Trump is enjoying the trappings of tradition, but so far, his presidency is anything but traditional. And some ethics lawyers and experts argue that at this moment, he could actually be in violation of the constitution. That specifically when it comes to his D.C. hotel. Arguably now, the crown jewel of the Trump empire. Holding it could put Trump in violation of the emoluments clause which says no one holding public office can take or receive gifts or payments from foreign governments.

NBC once touted how two active liberals were suing Trump, claiming the hotel was hurting their wine bar. In his report, justice correspondent Pete Williams noted that “The owners of the restaurant aren’t asking for any money in the lawsuit. They want the court to order the President to divest himself from any ownership of the Trump hotel.” Since the GSA determined that Trump’s sons owned the facility it’s unclear how the suit will go forward.

ABC and NBC did appear to be more intent on the potential impropriety than CBS was. That could explain why neither of them bothered to report the news that damaged their assertions.

SCOTT PELLEY: Today a federal agency ruled that President Trump's hotel at a historic former post office building in Washington is not violating its lease. The lease prohibits government officials from profiting from the property, but the General Services Administration says there is no violation because the President has transferred his businesses to his children and will not get any money from the hotel.