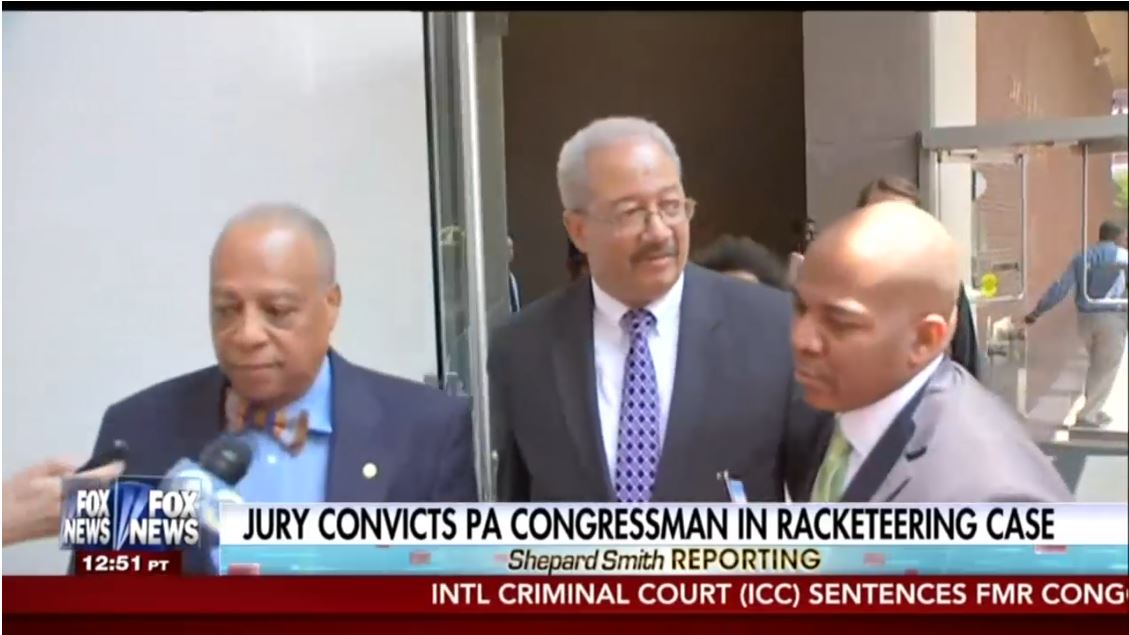 News broke Tuesday that Democratic Representative Chaka Fattah, of Pennsylvania, was convicted of a laundry list of federal corruption charges. According to Politico, the list includes, “bribery, racketeering, money laundering, bank fraud, mail and wire fraud, and filing false statements.” The elaborate scheme included Fattah lobbying the president or an appointment for one of his co-conspirators. All of this and the networks ignored it on their evening newscasts.

Fox News’ Trace Gallagher reported that, “Prosecutors say Fattah used a lobbyists as a quote, “human ATM.”” Gallagher also reported that Fattah, “took out an illegal $1 million loan from a former banking exec to fund a failed campaign to become Philly’s mayor, back in 2007.” The conviction means that Fattah, who is 59, now faces up to 20 years in prison.

The Hill is reporting that Fattah, “who lost his primary bid in April, gave no indication he planned to resign from his seat in Congress.”

Chaka Fattah Sr. and his co-defendants betrayed the public trust and undermined our faith in government. Today’s verdict makes clear that the citizens of the Eastern District of Pennsylvania expect their public officials to act with honesty and integrity, and to not sell their office for personal gain. Hopefully, our elected officials in Philadelphia and elsewhere hear today’s message loud and clear.

Instead of reporting on the serious matter of a sitting Congressman being found guilty on 29 separate counts of corruption, CBS News chose to report on the addition of 72 new emojis to smart phones.

TRACE GALLAGHER: A long-time Pennsylvania congressman convicted today in a racketeering case that could put him away for 20 years. A jury found Congressman Chaka Fattah guilty on all accounts including fraud and money laundering. Prosecutors say Fattah used a lobbyists as a quote, “human ATM.” They say he took out an illegal $1 million loan from a former banking exec to fund a failed campaign to become Philly’s mayor, back in 2007. Attorneys for the Democrat argued Fattah didn't know anything about the scheme