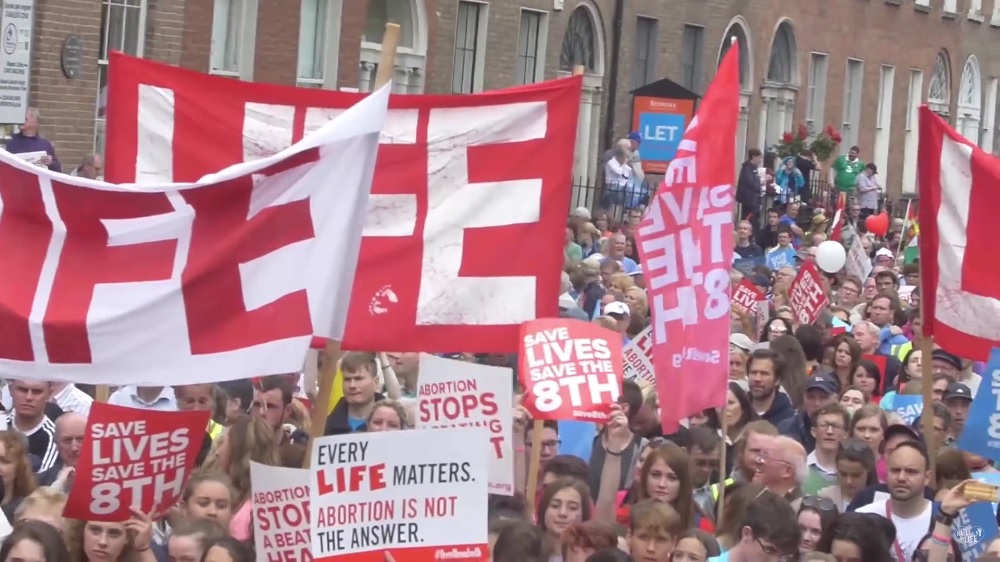 A Wednesday article from CNN touted the involvement of young American volunteers during the final days of a pro-life campaign in Ireland. Correspondent Kara Fox zeroed in on how Irish pro-abortion activists blasted one pro-life couple for their supposedly "deceptive" ways. Fox later spotlighted that "some Irish are outraged by foreign groups...arguing that American campaigners are using their vacations to stage a proxy war on women's rights in their country." She also failed to mention the involvement of Americans on the pro-abortion side.

The international journalist began her report, "The young Americans trying to stop Ireland from voting Yes to abortion," by noting how a passerby pelted a pro-life couple — Emily Faulkner and Nathan Berning, who are engaged — with an egg as they passed out flyers in Dublin. Fox continuted by outlining the "referendum on whether to repeal the Eighth Amendment to the [Irish] constitution -- which places the right to life of an unborn child on equal footing with that of the mother...If a majority vote Yes on Friday, Ireland is expected to enact legislation that will allow for terminations up to 12 weeks into a pregnancy. A No vote would keep the country's abortion laws -- some of the most restrictive in the developed world -- in place."

Despite disclosing that on both sides, "campaigners have become increasingly confrontational in their tactics," the CNN correspondent focused almost exclusively on the pro-lifers. Fox noted that Faulkner and Berning founded a group called Let Them Live, and had spent the past month in Ireland. She also highlighted that the pair are "both associated with the US-based conservative nonprofit The Leadership Institute."

Fox soon detailed that the engaged couple "launched a $10,000 crowdfunding campaign to finance the trip...[and] had written they'd be volunteering with Ireland's Pro Life Campaign. But after they experienced an 'unexpected' backlash from Irish pro-repeal groups, who said they weren't welcome and threatened to report them to immigration, they changed that description, removing any mention of joining the campaign in an official capacity." She added that these pro-abortion activists "described the couple's tactics as deceptive."

The journalist then expanded her scope beyond this first couple's efforts. She noted that "one branch of the national pro-repeal group Together for Yes told CNN its members have heard American accents on their doorsteps. LoveBoth, a prominent 'No' campaign group, brought over Claire Culwell, an American activist who calls herself an 'abortion survivor' to speak at its rallies across the country in April." The CNN correspondent also spotlighted that "some Irish are outraged by foreign groups like Let Them Live, arguing that American campaigners are using their vacations to stage a proxy war on women's rights in their country."

Fox contrasted the American pro-lifers with Máireád Enright, the only pro-abortion activist that she quoted in her write-up. Enright is Irish-born, but actually lives in the United Kingdom, where she works as a "senior lecturer in law at the University of Birmingham." The professor underlined that "the idea that a foreign group would think they would have much of an impact in the way of direct canvassing strikes me as terribly naive."

It should be pointed out that Fox left out the fact that Americans have actively been involved in the effort against the pro-life Eighth Amendment in Ireland. NPR filed a biased report in March 2018 that zeroed in on the activism of Mara Clarke, "an American expat...who runs the Abortion Support Network," a non-profit organization that helps Irish women get abortions in the United Kingdom. Clarke has traveled to Ireland to campaign against the Eighth Amendment.

The CNN journalist later detailed more of the reactions to the pro-life Americans' presence and activism. She reported that some were "upset to learn the group were not Irish," and quoted from a "George H.," who likened the visitors' actions to a prominent controversy involving President Donald Trump: "It feels like Russia and America and Donald Trump -- and that wasn't wanted. Is this wanted [here]? Its slightly off, if you know what I mean."

The correspondent used this excerpt as a jumping-off point to outline that the ballot question was "taking place in the wake of the Cambridge Analytica revelations, the Brexit 'Vote Leave' finance scandal and continued fallout surrounding alleged Russian interference in the 2016 US election...real-time indicators of foreign interference have sparked fears among transparency groups that Ireland could also be vulnerable to a similar fate as its neighbors to the east and west."

Fox did let the U.S-based pro-lifers have the last word at the end of her article. Berning disclosed that "'[it] turns out nothing we were originally planning on doing was illegal at all,' he said, adding that the group's plan for the final days of campaigning was to canvass highways and town centers with 5,000 posters they had printed in Ireland."