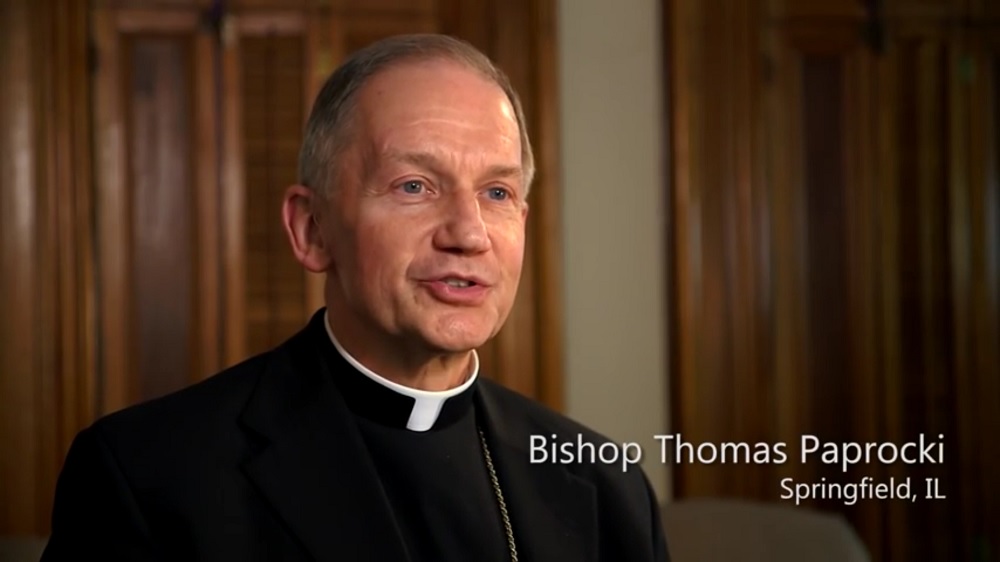 NPR blatantly slanted against a Catholic bishop in Illinois who recently instructed his priests to deny the Eucharist, last rites, and funerals to homosexuals in civil marriages. The public radio outlet filled their Friday write-up on Bishop Thomas Paprocki's decree with quotes from four activists who dissent against the Catholic Church's teachings on sexuality. While the article included excerpts from the cleric's document, as well as from a statement from his diocese, they failed to interview anyone conservative or orthodox to provide more balance to the four dissenters.

Correspondent Laurel Wamsley highlighted near the beginning of her article, "Illinois Bishop Decrees No Communion, Funeral Rites For Same-Sex Spouses," that Bishop Paprocki had issued "a set of norms on same-sex marriage and related pastoral issues that he says are the policy of the diocese." Wamsley summarized the bishop of Springfield's instructions:

The NPR journalist didn't mention that the hierarch concluded his decree by reminding his priests that "while being clear and direct about what the Church teaches, our pastoral ministry must always be respectful, compassionate and sensitive to all our brothers and sisters in faith.

Wamsley devoted 12 out of the remaining 17 paragraphs of her report to the quotes from the dissenters. She first turned to two leaders of DignityUSA, which she described as a "LGBT Catholic group." However, she omitted that the organizaton has a long track record of dissent against the Church's teachings on marriage. An October 2014 report about the group by CBS News pointed out that Dignity peformed a same-sex wedding ceremony for "LGBTQ activist" Brendan Fay and his partner.

The journalist noted that DignityUSA's new president, Christopher Pett, denounced Bishop Paprocki's document as "mean-spirited and hurtful in the extreme." She also cited the organization's executive director, Marianne Duddy-Burke, who contended that it was "simply cruel and shameful to refuse burial or Communion to those who seek the grace and comfort that our Church offers at some of the most difficult moments of life."

Before quoting from her third socially-left activist, Wamsley disclosed that the Springfield Diocese had issued a statement on the controversy: "Regarding the specific issue of funeral rites, people who had lived openly in same-sex marriage, like other manifest sinners that give public scandal, can receive ecclesiastical funeral rites if they have given some signs of repentance before their death." This excerpt referenced the Church's code of canon law, which regulates who may or may not receive Catholic funerals.

The NPR correspondent then set aside five paragraphs to quotes from Michael Sean Winters, whom she described as being a "columnist at National Catholic Reporter, an independent newspaper." Just as in the case of DignityUSA, she failed to mention the Reporter has a decades-long history of providing a platform for heterodox activists. They left out that Winters is a Democrat who had a book party in 2008 at the home of George Stephanopoulos for his tome Left at the Altar: How the Democrats Lost the Catholics and How the Catholics Can Save the Democrats

Winters first asserted, "I can't imagine a cruder thing more at cross purposes with what the Holy Father [Pope Francis] is trying to do." The liberal columnist later made an outlandish claim about Bishop Paprocki's peers: "Privately, 95 percent of other bishops in the U.S. are reading [the decree] and are horrified. Even the ones who are pretty arch on same-sex marriage think this is too far." How would Winters know this?

Wamsley followed her earlier bias by omission with her final Catholic dissenter, Christopher Hale, by merely noting that he "co-edits an online journal for young Catholics called Millennial." She didn't mention that Hale "helped lead national Catholic outreach for President Barack Obama's 2012 re-election campaign," as his National Catholic Reporter bio revealed. The editor stated that "a church that excludes the LGBT community is a church without a future," and that "no one goes to the grave without sin....Every Catholic deserves a Catholic funeral."

Hale, along with all of his confreres, should spend more time brushing up on Church teaching and canon law, instead of doing all in their power to change it to suit their left-wing agenda.