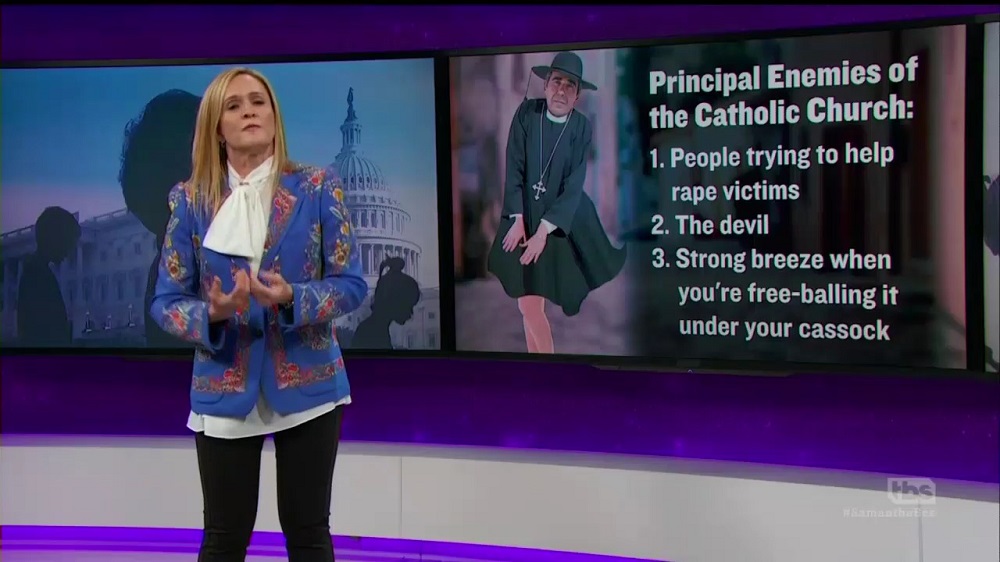 TBS's Samantha Bee unleashed against her longstanding nemesis, the Catholic Church, during a segment on Wednesday's Full Frontal. Bee zeroed on the Church's opposition to a proposed "child victims act," and contended that "if you're an institution that has hurt so many children that paying out civil settlements would make you go bankrupt, maybe you should?" The left-wing "comedian" added, "Anyway, it's fine. It won't. You're sitting on more treasure than Smaug the Dragon [a character in "The Hobbit"], so pay up."

Bee made sure to include her usual vulgar anti-Catholicism during the segment (for example, see the screen capture at right). The comedian included several sound bites from a co-sponsor of the bill in the New York state legislature, Democratic State Senator Brad Hoylman. In a highly-edited clip, the Democratic politician emphasized that "churches, yeshivas, the Boy Scouts of America are trying to quash the ability for survivors of child sex abuse to file claims" (video below).

The TBS host quickly followed with a snippet from a New York Daily News video report from May 2016, that noted that "the [New York State] Catholic conference, headed by Timothy Cardinal Dolan, spent more than $2.1 million from 2007 through the end of 2015 to lobby against the child victims act." Bee continued with a diatribe against the Church: "Way to fight the stereotype, guys. Does your flock know where the bake sale money is going? You know what? Everyday Catholics want to make things right, not have their Church forever be known as Our Lady of the Perpetual Bad Touch."

Moments later, Bee dropped her loaded line about the Church "sitting on more treasure than Smaug." She briefly targeted one of the opponents of the law — State Senator John Flanagan — before launching a barrage at Bill Donohue, the president of the Catholic League. The TBS personality inserted more anti-Christian bile into her attack on Donohue.

SAMANTHA BEE: ...When [child abuse] survivors saw their hopes dashed at last year's legislative session, this humble servant of God made an official statement on the Catholic League website...echoing the New Testament's taunting of the victims on the mount. 'And Jesus said unto them, 'Shit-out-of-luck are the meek for they can sit and spin — losers.' Donohue also called the bill's sponsor, Margaret Markey, the 'principal enemy of the Church.' I guess that means he downgraded the devil to second place.

Bee also played several clips of Donohue making politically-incorrect statements where he attacked "Muslim barbarians" and claimed that the priest abuse scandal was about homosexuality, not pedophilia. She pleaded with her fellow TV hosts, "Will you please stop inviting Bill on television now? Will our senators at least stop siding with him against [sex abuse victims]?"

As you might expect, Donohue replied to Bee in a Thursday press release (MRC president Brent Bozell is a member of the board of advisors for the Catholic League):

Samantha Bee is no stranger to Catholic bashing, so it was hardly surprising to learn that she ripped the Catholic Church in her June 21st show. Her focus was the Child Victims Act, a bill being considered by the New York State legislature. The least controversial aspect of the bill is extending the number of years that alleged victims could sue; the most controversial component is allowing a one-year window to revive old cases.

According to Bee, the bill's opponents are evil-minded persons who seek to justify child sexual molestation (she went off-the-rails on me). She interviewed a sponsor of one of the bills, State Senator Brad Hoylman, who said opposition was coming from the Catholic Church, yeshivas, and the Boy Scouts.

The reason why I have long opposed these bills is twofold: a) they suspend the statute of limitations, a due process staple for the accused, and b) anti-Catholic bigotry. Regarding the latter, in every state where legislation like this has been considered, rapacious lawyers with a history of Catholic bashing have zeroed in on the local diocese, dragging up cases from a half-century ago where many witnesses have died or memories have faded. The public schools always get a pass.

The latest data show that .004 percent of the Catholic clergy had a credible accusation made against them in the year 2014-2015. No institution, secular or religious, can match that record.

It is in the public schools where child rape exists on a massive scale, and no one is doing anything about it. Moreover, they are still “passing the trash,” moving molesting teachers from one school district to another. Furthermore, because of the doctrine of sovereign immunity, alleged victims have only 90 days to file suit, otherwise they are out of luck.

Bee’s wide-ranging attack on me—she looked and sounded delirious—bears no response; the random clips her producers spliced together can be easily defended.

Samantha Bee epitomizes the worst of comedians these days: she is dishonest, crude, and without a whole lot of talent. At least Kathy Griffin can be funny. But Bee seems to have found her niche—feeding the appetite of bigots.