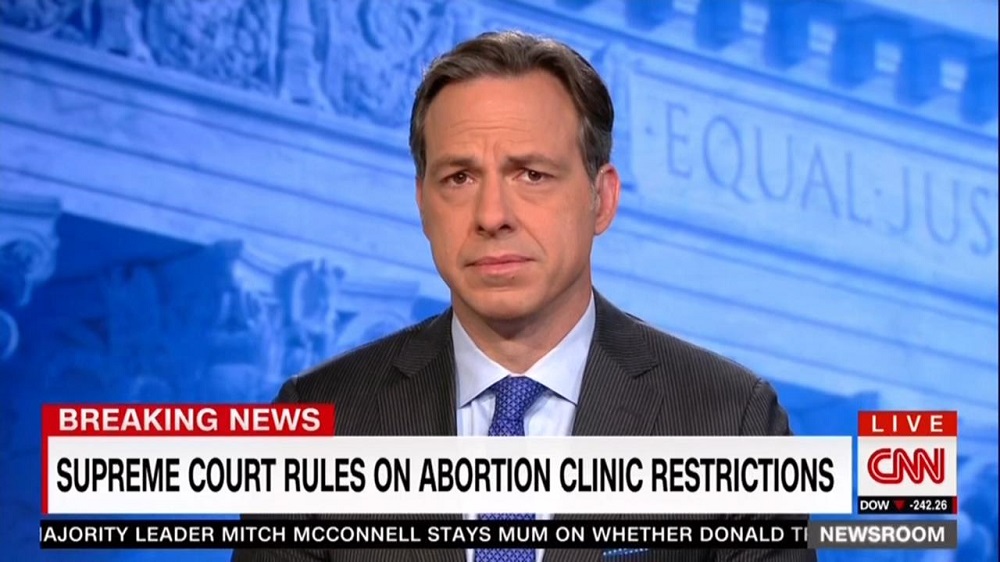 On Monday, CNN's breaking news coverage of the Supreme Court striking down Texas's sanitary regulations on abortion clinic clearly slanted towards the pro-abortion side. Pamela Brown twice touted the "huge win for abortion rights activists," and later underlined the "big win" to a pro-abortion legal analyst. Jake Tapper trumpeted the "seismic decision by the U.S. Supreme Court," and hinted that pro-lifers were being hypocritical: "All of the, quote/unquote, burdensome rules and regulations that conservatives often complain about would have to be adhered and applied to these abortion clinics."

Tapper turned to Brown, who reported on the five to three decision from right outside the Court. After giving her "huge win" phrase for the second time, the correspondent noted that "abortion rights activists...had argued all along that this law was a thinly-veiled attempt to stop abortion in the state." Fellow CNN journalist Dana Bash boosted this pro-abortion argument less than five minutes later: "These are ruby-red states...trying to get around Roe v. Wade; trying to get around a federal law that says that abortion is legal." [video below]

Brown turned to Elizabeth Wydra, whom she introduced as a "CNN legal analyst and president of the Constitutional Accountability Center." The correspondent disclosed that Wydra "wrote a brief in favor of the abortion rights activists," but omitted giving her an ideological label. She stated that "obviously, this is a big win for you," and asked, "What is the significance of this ruling today in this abortion case?" The analyst replied, "It's a big win," and emphasized that states "can't make an end-run around the constitutional right to have an abortion by putting up these laws that purport to protect a woman's health; but really, as the majority opinion says, have no relationship to women's health. In fact, the Court said, clearly, that they are not necessary." Brown added, "Not only not necessary, but unconstitutional."

JAKE TAPPER: When Texas legislators wrote this law — which required that if you worked at an abortion clinic if you were a doctor, you had to have admitting privileges at a local hospital; and any clinic had to adhere to the standards of a hospital. And we should point out to those watching — that doesn't just mean...a sterile surgical environment. That meant that the corridors, the hallways, needed to be of a certain width. There needed to be a certain number of parking spaces. The doors needed to swing a certain way. All of the, quote/unquote, burdensome rules and regulations that conservatives often complain about would have to be adhered and applied to these abortion clinics.

After Wydra's appearance, The Lead anchor also spotlighted the pro-abortion activists who were reveling in the Court's decision by playing the disco hit, "I Will Survive:" "You can always tell that it is a celebration going on for abortion rights supporters when the Gloria Gaynor has been broken out and is playing in the background." Tapper missed an obvious detail — that the unborn babies clearly don't "survive" the abortions procedures [video below].

DANA BASH: Going back to what you [Jake Tapper] said earlier about the fact that Bill Clinton used to say 'safe, legal, and rare'...And Hillary Clinton is just saying 'safe' — as I was thinking about it, I think you're right in terms of just how, politically speaking, where the Democratic electorate is — or at least where...the Democratic presumptive nominee thinks that the electorate is...twenty, 25 years ago, Democrats were still campaigning hard in states with a lot of socially-conservative Democrats. Not so much anymore — it's a much more divided country. And so, Hillary Clinton, politically speaking, doesn't have to say the 'rare' part. She can just say the 'safe' part, because those are the kinds of voters she's appealing to.

Tapper and CNN's usual anchor at that time of the day, Carol Costello, closed out their network's breaking news coverage with more slanted language:

JAKE TAPPER: I don't think those states are going to stop — whether it's Oklahoma or others — are going to continue to pass legislation that they consider to be pro-life. We're going to take a very quick break. We'll come back with more on this seismic decision by the U.S. Supreme Court.

CAROL COSTELLO: You see all of these protesters in front of the U.S. Supreme Court in Washington, D.C. That's because a monumental decision has been handed down by the Supreme Court. The Supreme Court decided that a Texas law limiting abortion in that state was unconstitutional, and they struck it down. Abortion rights advocates are celebrating this morning; but those who are opposed to abortion are certainly not.