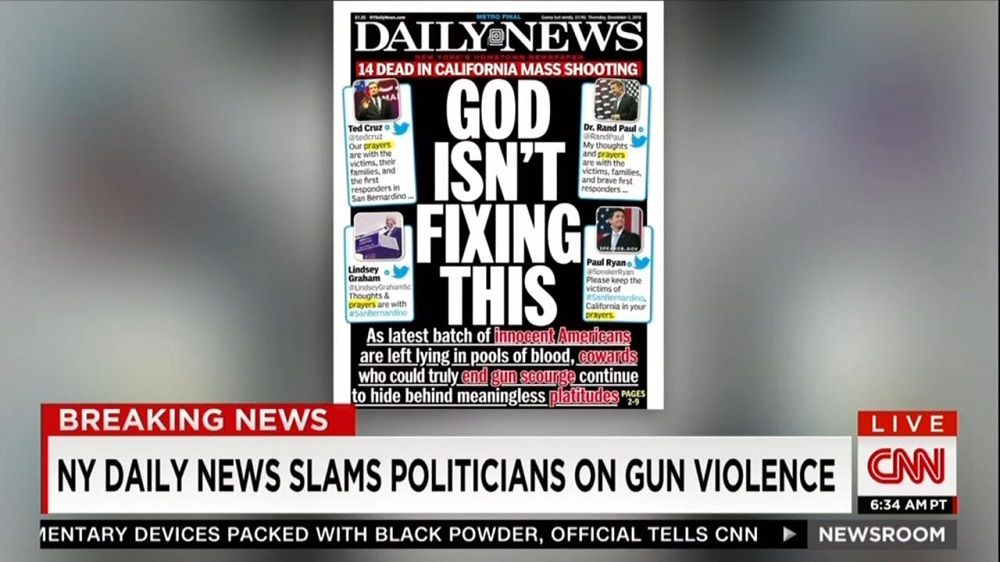 Three CNN programs on Wednesday night and Thursday morning promoted the anti-prayer front page of the New York Daily News on Thursday: 'God Isn't Fixing This.' Unsurprisingly, pro-gun control anchor Carol Costello quoted from the liberal newspaper's headline and sub-headline on Thursday's CNN Newsroom: "That phrase, 'thoughts and prayers'...prompted this provocative New York Daily News front page — it's gotten a lot of buzz this morning...It reads, 'God Isn't Fixing This,' and slams [Ted] Cruz and other 2016 contenders as — quote, 'cowards who continue to hide behind meaningless platitudes.'" [video below]

Don Lemon read the Daily News's headline four times during a segment with Dan Gross, the president of the pro-gun control Brady Campaign, on Wednesday's CNN Tonight. As you might expect, Gross agreed with the publication's incendiary sentiment:

DON LEMON: Hey, I want to put this up. Can we put up this Daily News cover? Again, we're waiting for this news conference. You see it there. There's a — this is a Daily News cover, Dan. It says, 'God Isn't Fixing This.' And it's got the Tweets from all of the news makers, and all of the elected officials and lawmakers about gun control and they keep — you know, it's — from — mostly from GOP candidates. But it says, 'God Isn't Fixing This.'

DAN GROSS, PRESIDENT, BRADY CAMPAIGN TO PREVENT GUN VIOLENCE: Yeah. I mean, religion doesn't need to be a part of this conversation. It's up to the American public to fix it.

LEMON: Dan Gross is the president of the Brady Campaign to End Gun Violence. If we can put that Daily News cover up again — the front page of the Daily News. And the reason it says, 'God Isn't Fixing This,' is because you have — Ted Cruz is running for president, who says, 'Our prayers are with the victims, their families, and the first responders in San Bernardino.' Rand Paul saying similar thoughts: 'My thoughts and prayers are with the victims, families.' Lindsey Graham: 'thoughts and prayers' — Paul Ryan, the new Speaker of the House, says, 'Please keep the victims in California in your prayers.' And again, the Daily News taking a stance on this — saying, 'God isn't fixing this.' Thank you very much, Dan.

The following morning, anchor Chris Cuomo mentioned the liberal newspaper's front page at the bottom of the 7 am and 8 am Eastern hours of New Day:

CHRIS CUOMO: ...This was the second mass shooting just yesterday — the 355th of the year in 2015. We're going to hear from lawmakers now. They're going to say, we have to do something about it. For some, that means more laws.

Look at the cover of New York Daily News today: they're calling out lawmakers who expressed sympathy — and that's what we do in situations like this — is let those victimized know that we care. But the question is — well, what is caring going to mean? Should it mean tougher gun control? It's very divided in this country. People look at a situation like this, Alisyn [Camerota] and Mick [Michaela Pereira], and say, what law would have changed this? The handguns that they bought were bought legally. The two long guns that they bought were bought legally, but not by them — and that is an often overlooked aspect of these investigations. Who bought those guns, and how did they wind up in the wrong hands? 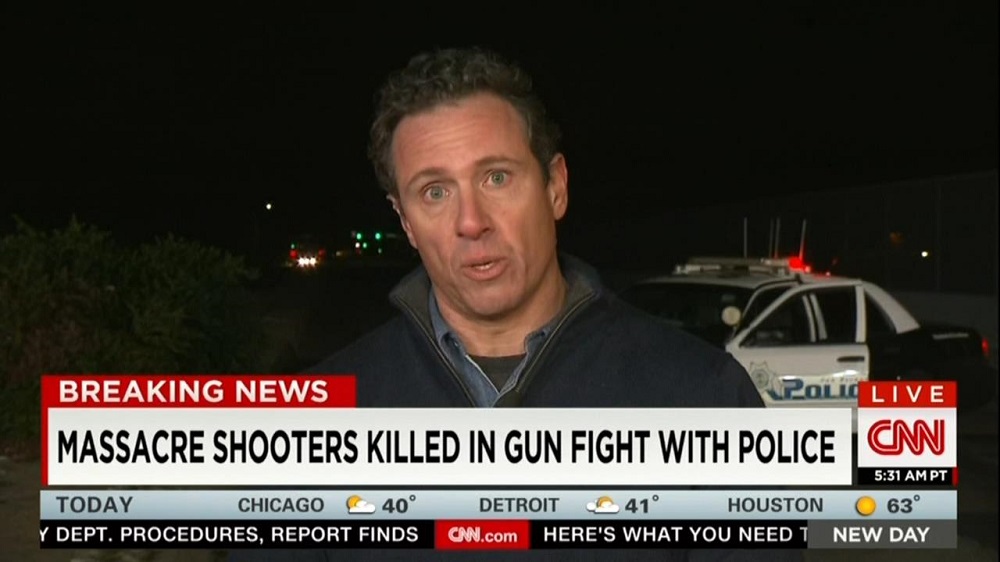 CUOMO: These attackers came prepared. Again, that's what authorities say. They had assault rifles. They had semi-automatic handguns. They were ready and equipped for a rampage. There's no question about that. The question is, why they did it? Was it just spontaneous; or was it planned, as it appears?

Take a look at this: the cover of the New York Daily News calling out lawmakers who expressed sympathy, but don't act on that empathy, according to that outlet. And certainly, Alisyn, that's part of the debate we have, in every one of these, is how do you stop the next one?

An hour after Cuomo's second mention, Costello promoted the Daily News's attack with her "provocative" label of the front page:

CAROL COSTELLO: The deadly shooting here in San Bernardino, like the Planned Parenthood and Oregon community college shootings before it, unfolding in the midst of a fierce battle for the White House. This morning, several Republican hopefuls will appear at a forum hosted by Jewish leaders — in fact, Ted Cruz — you can see him there — the senator speaking now. We'll bring you what he has to say in just a minute.

But that forum comes as the political reaction to the shootings highlights the ideological divide. Democrats urging tighter gun laws — Hillary Clinton Tweeting, 'I refuse to accept this as normal. We must take action to stop gun violence now' — Clinton's words echoed by Bernie Sanders and Martin O'Malley.

As for the Republican hopefuls, the sentiment focused on those affected by the violence — Ted Cruz Tweeting, in part, — quote, 'Our prayers are with the victims, their families, and the first responders.'

And it's that phrase, 'thoughts and prayers' — expressed by Cruz's rivals and others — that prompted this provocative New York Daily News front page — it's gotten a lot of buzz this morning — take a look. It reads, 'God Isn't Fixing This,' and slams Cruz and other 2016 contenders as — quote, 'cowards who continue to hide behind meaningless platitudes.'