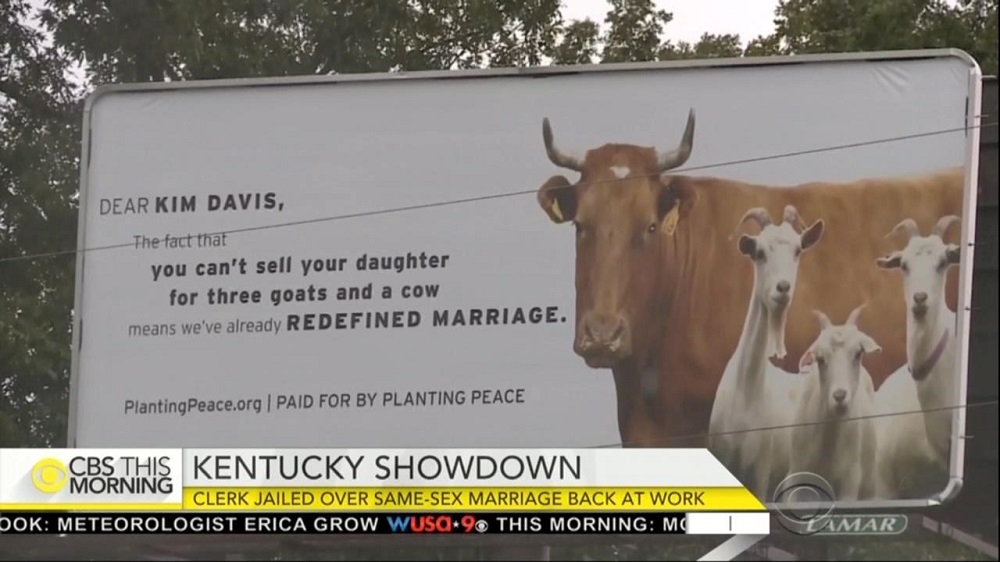 Monday's CBS This Morning and NewsNation on MSNBC both failed to give a political label for a liberal group that put up a billboard in Kentucky that mocks that social conservative beliefs of Kim Davis and traditional marriage supporters. CBS correspondent Jericka Duncan referred to Planting Peace as merely a "non-profit organization." MSNBC journalist Sarah Dollof also noted their non-profit status and reported that "they're focused on humanitarian and environmental initiatives." [video below]

Planting Peace, the nonprofit humanitarian organization that paid for the billboard, said in a statement that the "intent of the billboard is to expose this narrow interpretation by Davis and others that they use to defend their discrimination against the LGBTQ community."

"Dear Kim Davis, the fact that you can't sell your daughter for three goats and a cow means we've already redefined marriage," the billboard reads.

Fusion, a joint project of ABC and Univision, also spotlighted Planting Peace's billboard in a Monday article on their website (which was promoted by ABC News's Twitter account). Writer David Matthews made his own liberal bias clear from the very first paragraph: "It's Monday morning, which means that somewhere in Rowan County, Kentucky, clerk Kim Davis is returning to work after a court-mandated vacation (in jail). But, before she walks through those doors and gets back to business, she might drive past a billboard that has been put up to mock her position on marriage equality."

Matthews continued with the same "nonprofit" term that Duncan, Dollof, and Fieldstadt used, and noted that the group is "focused on a variety of issues like LGBTQ equality, the rainforests, and deworming." He also noted that "the billboard refers to a passage in the book of Exodus where the Israelites were given the go-ahead to sell their daughters as long as certain stipulations were followed."

The Fusion writer closed his item with even more slant:

In a press conference before she entered the building, Davis told the assembled crowd "I'm no hero."

The transcript of the relevant portions of Jericka Duncan's report from Monday's CBS This Morning and Sarah Dollof's report on Monday's NewsNation on MSNBC:

JERICKA DUNCAN: Thousands of people cheered on the county clerk, but not everyone is giving her a hero's welcome. Over the weekend, this billboard defending same-sex marriage popped up near the Rowan County courthouse, and reads, 'Dear Kim Davis, the fact that you can't sell your daughter for three goats and a cow means we've already redefined marriage.' The non-profit organization Planting Peace paid for the ad.

DAVIS HAMMET, PLANTING PEACE OPERATIONS DIRECTOR: We are trying to send a message that will inspire her to think through this – to recognize that she is acting as an agent of the government – and if she can't fulfill that duty, she needs to resign.

PETER ALEXANDER: Sarah, we're also hearing about this billboard that went up in Morehead that basically greeted Kim Davis as she returns. And just to get it right, it reads, 'Dear Kim Davis, the fact that you can't sell your daughters for three goats and a cow means we have already redefined marriage.' Any better sense of who's behind this?

SARAH DALLOF: Yeah. It was – that billboard was put up by an organization – a non-profit called Planting Peace. They're focused on humanitarian and environmental initiatives. Total cost for a month to display that billboard was $500. And a spokesperson for the organization said its intent is to expose how anti-LGBT advocates are selective in how they choose to defend traditional values; as well as send a message to LGBT youth that they are loved.