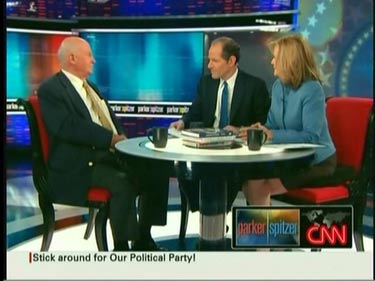 Conservative Richard Viguerie brought his criticism of CNN's "left-of-center" bent on Thursday's Parker-Spitzer, and recommended that the network bring on more "articulate conservatives." The two CNN hosts, whom Viguerie recently criticized in a recent column, did their best to support his allegation by bringing on four liberals as guests during the program.

The conservative wrote an August 17, 2010 column in the Washington Examiner criticizing CNN for claiming that they're "playing it right down the middle," when in reality, they lean towards the liberal side. Parker launched right into addressing her guest's criticism: "So, we're going to go ahead and get the elephant out of the room, and I'm not talking about you. But you did write about me....that I am a 'pleasantly wishy-washy, mostly plain vanilla Republican.' It's hard to see your words applied when the person is actually present, isn't it?"

Viguerie replied by half-jokingly taking back his label, but immediately gave her another:

VIGUERIE: Kathleen, all due respect, in the last 10 days or so, I have been watching this show, I would change vanilla to more distilled water. I've not heard you say, an ideological thought that disagrees with Eliot.

Throughout the first half of the 11-minute segment , which began 15 minutes into the 8 pm Eastern hour, Spitzer actually more vigorously defended his co-host than she defended herself. Later, Viguerie stated that "CNN says they play it down the middle. Nobody that I know- literally no one in the Republican, conservative, right-of-center community sees CNN as playing it down the middle. We see it as- you know, left of center." Parker merely replied, "Well, they hired me to balance that out." On the other hand, the former New York governor of "Client Number Nine" infamy chimed in that "Kathleen is not only not plain vanilla- she is acerbic, she's smart, and she- her critiques are devastating, but we'll get to that over the course of this show."

When the conservative countered by stating that "I'd just like for her to express some conservative thoughts," Spitzer played his old role as prosecutor, which led to some back and forth between him and Viguerie:

SPITZER: And since we're both here at CNN, and- you know, I have this funny thing, when you gore my ox or whatever the cliche is, I'm going defend it. You said at the top that CNN was left of center- didn't play it straight down the middle. Give us some examples, because- honestly, I, sitting here now as a journalist, think that this a network that firmly believes in facts and vigorous debate, but always based on the facts, and makes it clear when a statement is a statement of opinion. So give us examples.

VIGUERIE: Well, I ran into David Gergen, somebody who I've known for decades and I like David, and we were talking, and David now lives at Harvard. He's part of the CNN crew here. Everywhere I look at CNN, I see the ruling class. And when you look at Fox, you see people that you could see maybe living next door to you- you know, being a colleague at work-

PARKER: Well listen, I moved here from Camden, South Carolina, a population of-

PARKER: Yeah, I mean, come on.

VIGUERIE: But Kathleen, how many times do you see conservatives on CNN who are articulate and will challenge an Eliot Spitzer?

PARKER: I have to tell you, they're really hard to find, because Fox has got them all on payroll. (laughs)

VIGUERIE: Well, it's out there, but we're looking for you to raise-

SPITZER: Richard, once before I said this in this program: that was fun to listen to, but you didn't answer the question. (Parker laughs)-

VIGUERIE: (laughs) No- well, you're a good lawyer-

VIGUERIE: No, no. David Halverson, the great writer, said years ago, in a book that he wrote, that media bias does not come in distorting facts, lying, misrepresenting things- it comes in the selection of the news story. So when liberals look at waste, fraud and abuse, say, in the military, and they don't look at waste, fraud and abuse in the welfare program- that's media bias. So, where are the articulate conservatives on here on CNN?

VIGUERIE: But that's great, Eliot, but that's 10 minutes. You know, you're going to be on for five hours this week and five hours next week. But where are the articulate conservatives that will challenge you, day in- and not just there, but all throughout CNN?

Spitzer even went on to claim that he thought Viguerie was wrong because "I think the two of us are not only open-minded on every issue, we battle when we disagree, and we go to facts and we go to first principles about what makes this country great, which is markets, capitalism, democracy, tolerance. That is what we believe in. I'm no liberal, I'm no conservative- I believe in those basic principles."

Viguerie has some ground to stand on if you just looked at the rest of the Parker-Spitzer program that evening, because the two hosts had former Al Gore advisor and leftist extraordinaire Naomi Wolf and Tea Party-basher John Avlon for two segments. During the second Wolf-Avlon segment, Parker and Spitzer also brought on homosexual activist Andrew Sullivan and NPR contributor John Ridley for a panel discussion.

Later in the segment, Parker returned to her regular bashing of mainstream conservatives within the Republican Party:

PARKER: Well, I want to get back to a couple of things. First of all, you started in 1961, here in New York City, with William F. Buckley, and I'm wondering if you think that today's Republican Party is William F. Buckley's party- that's question number one. Number two, you call yourself a Reagan conservative, and yet, you supported John Connolly in 1980- he's a former governor of Texas. Isn't that right?

VIGUERIE: Growing up in Texas, I was enamored with Connolly, and that was a mistake. I would the not do that again. Reagan was obviously the man. But-

PARKER: So to Buckley.

VIGUERIE: Yeah, back to Buckley. The Republican Party is not the party that- excuse me, the Republican Party is not the party that Bill Buckley would want today, but it's moving in that direction. The reason the Republicans lost the Congress, Kathleen, in '06, the White House in '08-  had nothing, literally nothing to do with Nancy Pelosi, Harry Reid, Barack Obama. It had everything to do with Tom DeLay, Denny Hastert, Karl Rove, George Bush, Bill Frist- the big government Republicans. People were furious at them, and they were not voting for the Democrats so much as they were throwing the Republicans out. They wanted to fire the Republicans, just like the country wants to fire the Democrats this year.

VIGUERIE: They've got the homosexual group in there, too. So, anyway, it's a big tent- CPAC- and it causes a lot of controversy.

PARKER: And we both have been very complimentary of the grassroots feel of the whole thing. We like that. But there are some characters out there who are- I think William F. Buckley would think- are a little bit on the kooky side of things, and I'm not sure that's where you really want to take the party.