Spit it out, Scarborough! Instead of making ugly, thinly veiled accusations against Republicans, have the guts to flatly say what you think!

"When you look at the briefings [on Biden's docs situation], you know, there have been a lot of Republicans who have been critical of Karine Jean-Pierre, of course they have been from the beginning. I'll let people draw their own conclusions as to why. It seems pretty obvious to me."

Gee, wonder what Joe might have been implying? Let's see: Jean-Pierre is celebrated as a black lesbian immigrant from Haiti. Certainly sounds like Scarborough is accusing Republicans of hitting the bigotry trifecta of homophobia, racism, and sexism.

Typically, Mika chimed in to agree with Joe, adding "yeah."

So is there no proof that Jean-Pierre isn't quite up to the press secretary's job? Scarborough proceeded to undermining his argument by angrily asking why Adm. John Kirby isn't doing the briefings on the classified documents, considering his national-security expertise. So Jean-Pierre is very competent, but Kirby should replace her on the deep-thinker issues? Is Joe sounding like a bigot?

Scarborough repeatedly made the point that Kirby, who served as press secretary for Obama at both the Pentagon and the State Department, is an expert on the issue of classified materials and related matters. Brzezinski again agreed with Joe, intoning "Kirby" as if it were Mika's personal mantra. 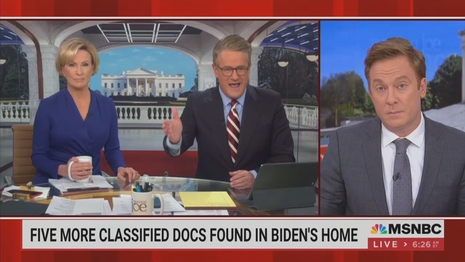 And indeed, why is it that Biden hasn't replaced Jean-Pierre with Kirby? Is ol' Joe bigoted against older, cisgender, straight white males?  A likely answer is that Biden is afraid of being accused of bigotry against Jean-Pierre by people like Scarborough, who are so quick to scream "discrimination" in such cases.

The bottom line is that anyone who has followed Jean-Pierre's embarrassing career behind the briefing-room mic knows that she is utterly unfit for the job. And it's not just Republicans who are dissatisfied with her performance. For example here's a White House reporter for CBS, hardly a conservative outlet, clashing with the press secretary over her obfuscation on Biden's classified documents.

On Morning Joe, Joe Scarborough implicitly accusing Republicans of bigotry over their criticism of Biden spox Karine Jean-Pierre, a gay black woman, was sponsored in part by Chewy and Life Alert.

JONATHAN LEMIRE: A lot of it is whataboutism, a lot of it is false equivalencies, but there's no doubt here: the White House has made some missteps in how handling this, and that's helped muddy the waters.

JOE SCARBOROUGH: Well, and also when you look at the briefings. You know, there've been a lot of Republicans who have been critical of Karine Jean-Pierre, of course they've been from the beginning. I'll let people draw their own conclusions as to why --

SCARBOROUGH: -- it seems pretty obvious to me.

But in this case, you have an admiral who has worked at the Pentagon around national security issues and certainly, has had to know the ins and outs of classified documents. Why have they not been having him out there briefing? Because --

SCARBOROUGH: Where is Admiral Kirby? If you have somebody on your staff, why are they not using somebody, Jonathan Lemire, on their staff.

MIKA: Who's more comfortable with material.

SCARBOROUGH: That's grown up with this! Who's lived with this his entire career! What are they doing?

LEMIRE: That's a fine question, Joe. I mean, right now, the way it's worked since Kirby moved from the Pentagon to the White House, is he simply handles the foreign policy issues. Anything domestic is still White House, purview of the White House press secretary, Karine Jean-Pierre.

Why are they not putting him out there to discuss it? Because, it's been his professional life. His entire adult life he's had to deal with classified materials. They have him in the building, why are they not using him?

LEMIRE: I suspect that's a question they're going to face this week.