There was much liberal gnashing of teeth when Donald Trump appointed Neil Gorsuch, Brett Kavanaugh, and Amy Coney Barrett to the Supreme Court. Libs feared that those Justices would do Donald Trump's bidding without question.

But it hasn't turned out that way, as underlined in the brief, unanimous decision just issued by the Court clearing the way for the IRS to turn over Trump's tax returns to the Democrat-controlled House.

Scarborough praised the Justices for "standing steadfast" for "Madisonian checks and balances." Scarborough also said that, contrary to Trump's assumption that the Justices he appointed would rule in his favor, "not only do they not rule in his favor, but these decisions are unanimous. They're unsigned, and, I would say, a ringing endorsement of some basic, fundamental rules of law."

Scarborough completed his hosannas by breaking out a sports analogy. Saying that Trump was "sadly mistaken" in thinking that conservative Justices would automatically rule in his favor, Scarborough observed that, when it comes to constitutional issues, Clarence Thomas, Brett Kavanaugh, and Amy Coney Barrett have been "straightforward in calling balls and strikes."

Note: Joe's joy over the conservative Justices could be short-lived. Under the same statute that led the Court to rule that House Democrats could get Trump's tax returns, it's possible that the Republican House majority could obtain Biden's returns. What if it turns out that Biden is indeed "the big guy," who skimmed some of Hunter's profits? Did Ol' Joe declare those ill-gotten gains on his tax returns? 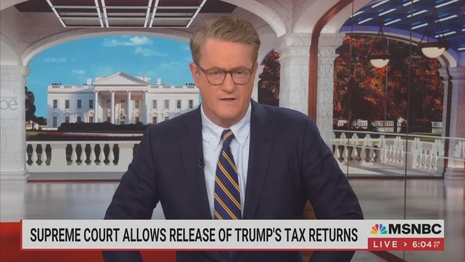 On Morning Joe, Joe Scarborough showing sudden respect for conservative Justices on the Supreme Court was sponsored in part by Liberty Mutual, GlaxoSmithKline, maker of Shingrix, and Jeep.

WILLIE GEIST: The Supreme Court has cleared the way for House Democrats, finally, to access Donald Trump's tax returns. The former president has fought for years to shield those records from the House Ways and Means committee. The decision came in a brief, one-page order that noted there were no dissenting votes. This means the House Ways and Means committee, which has been seeking Trump's tax documents since 2019, can now attempt to access the materials before Republicans take over the House in January.

We're seeing, time and again, the United States Supreme Court in these issues, these issues involving Madisonian checks and balances, we see this Court standing steadfast, and really drawing a straight line between themselves and the U.S. v. Nixon case back in 1974.

I think it's important not to conflate other decisions the Supreme Court makes, whether you're talking about the overturning of Roe—a half-century precedent which was shocking, but actually not surprising if you look what these Justices had said since their law school days.

When you even go up to Clarence Thomas, you go up to Brett Kavanaugh, you go up to Amy Coney Barrett. If he thought he was going to get any special breaks on these rulings, he's been sadly mistaken . . . This is quite a compelling argument for this Supreme Court, on these issues, being straightforward in calling balls and strikes.