This could be the biggest display of chutzpah since the guy convicted of offing his parents pleaded for mercy on the basis of being an orphan. MSNBC's Morning Joe co-host Joe Scarborough had the gall Monday morning to condemn President Trump over an Epstein conspiracy theory, despite having floated a bizarre one himself.

Shortly after the news of Epstein's death became public on Saturday morning, Scarborough took to Twitter: 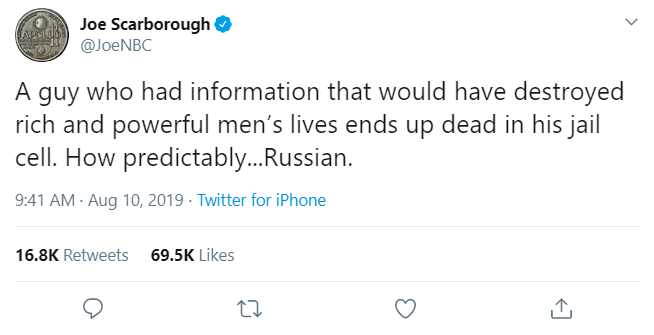 After being called out on Twitter for his Epstein conspiracy theory, Scarborough tried to pass it off as just a "glib" tweet he did "after finishing my coffee."

And that brings us to Monday, where, at least in the crucial opening segment, Scarborough made no mention of the conspiracy theory he had floated. Instead, Scarborough said that Epstein "apparently took his own life." Scarborough even boasted of having called for Epstein to have been put on suicide watch weeks ago at the time he first sustained injuries in his cell.

Scarborough then teed up Mike Barnicle, who replied that the American public, is going to need answers as quickly as they can be provided, to sort of put a blanket on all of these speculative theories and conspiracy theories that are abounding and being given, you know, great length of life on Twitter and other social media." You mean, Mike, by people like Joe Scarborough?

Scarborough then sarcastically said of President Trump: "You've got to give the President credit. He did jump right into the issue immediately and took to Twitter and got involved." Scarborough invited Associated Press reporter Jonathan Lemire to describe the Trump retweet of a tweet suggesting Bill Clinton might have been involved.

Moments later, Scarborough suggested to the BBC's Katty Kay that Trump's retweet proves Anthony Scaramucci's assertion that Trump is "getting worse," and has become "more and more unbalanced." Joe, before you take the mote out of Trump's eye, how about casting the "unbalanced" beam out of your own?

Does Scarborough really think he's going to get away with this feeble flimflam of blaming Trump for something he himself engaged in? Not so long as NewsBusters is around!

Note: Barnicle too, despite condemning "speculative conspiracy theories," also indulged in one himself. When news of Epstein's death broke, Barnicle tweeted: "Wait a minute. A guy on suicide watch; a guy whose past associations threaten reputations of many rich and powerful, hangs himself in his cell. Please!!"

MIKA BRZEZINSKI [from Morning Joe, 7/25/19]: The 66-year-old was found semiconscious with marks on his neck in his cell at the Metropolitan Correctional Center in Manhattan, some time in the last two days. According to two sources he’s now on suicide watch.

SCARBOROUGH: Why wouldn’t he be on suicide watch before that?

SCARBOROUGH: That was our reaction nearly three weeks ago. The last time Jeffrey Epstein was found with marks on his neck while behind bars. Yet, over the weekend, he still wasn’t being properly monitored and apparently, he took his own life

MIKE BARNICLE: Well, Joe, if the official story right now is -- if the facility is understaffed we have known that it's been understaffed for quite some time. There's really been no clear answer on monitoring — electronic monitoring. I don't think there was electronic monitoring in his cell. He was alone in a cell which is against DOJ — Department of Justice policy which is king of a key question that has to be answered. The bottom line, Joe, is that the public, the American public, is going to need answers as quickly as they can be provided, to sort of put a blanket on all of these speculative theories and conspiracy theories that are abounding and being given, you know, great length of life on Twitter and other social media. We need answers. We need answers as soon as today and unfortunately, DOJ has been very, very slow getting off the mark here in providing the American public with answers. This is --- this is both outrageous, unbelievable and it tempts people to thinking that the worst has happened, that government is never on the level. And this is just going to be a full-blown conspiracy cloud that needs to be put to rest immediately.

SCARBOROUGH: Well, that's what The Wall Street Journal editorial page this morning wrote. That this is one more reason why Americans don't trust their government.

SCARBOROUGH: Jonathan Lemire, You've got to give the President credit. He did jump right into the issue immediately and took to Twitter and got involved. What did he do?

JONATHAN LEMIRE: Well, the President has long trafficked in conspiracy theories. He, of course, was at the forefront of the birtherism movement, in which he claimed Barack Obama was not born in the United States, which is a racist lie, even beyond a conspiracy theory. But even before he became a politician, and since then, we know he talked about Ted Cruz's father perhaps being involved with the JFK assassination, and others and he was quick to do so here as well. Within just hours of Epstein's death being reported, he took to Twitter and retweeted a couple of conspiracy theories that suggested that his predecessor, Bill Clinton, perhaps was involved with this death.

SCARBOROUGH: The President almost does Anthony Scaramucci’s work for him, when Scaramucci suggests that the President is getting worse. Something Jeffrey Goldberg wrote in The Atlantic last week, which is fairly remarkable when you look at how bad things have gotten. How chaotic things have gotten, how you look at Jonathan Lemire’s article from a few weeks ago talking, with the Associated Press, talking about how many people around the President say his management style has become even more outrageously unmoored and then the President caps all of that off by accusing the Clintons of murder. It --- it does just seem to keep getting worse and the President seems to become more and more unbalanced.