Imagine that Fox News had run a spoof video of someone seeming to line up a leading Democrat for a high-powered rifle shot. Need we state the obvious? MSNBC and the rest of the MSM would have interrupted all normal broadcasting for at least the rest of the day to condemn the outrage.

But if a liberal late-night TV show runs a clip of Sarah Palin seeming to take such a shot at Dick Cheney?  Well, that's all in good fun.  Conan O'Brien last night ran a spoof video of Palin, reacting to Cheney's recent comment that McCain's pick of her as his running mate was a mistake, seeming to line up Dick Cheney for a shot with a high-powered rifle. Morning Joe replayed the clip this morning and guest host Mike Barnicle pronounced it "pretty good!" as a guest smiled on.  View the video after the jump. 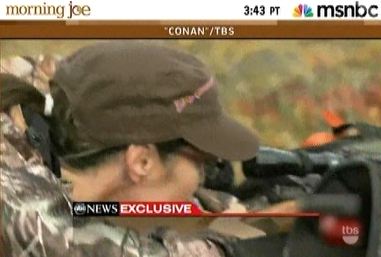 Guest Wes Moore, who just last week on the show called for more gun control in the wake of the Aurora, Colorado shooting, can be seen smiling and was all chuckles as he was immediately thereafter introduced.

Watch the clip that liberals found so funny, and imagine their reaction if the personae had been different.

Note: the spoof clip ends before the result of Palin's shot is seen, and a graphic appears announcing "To Be Continued."  I think we can assume that in the continuation, Palin never hits Cheney, and/or is actually seen as having been aiming at someone or something else. But that in no way detracts from the outrage with which the MSM would have reacted had the target been on of their own.

CONAN O'BRIEN: Former Vice-President Dick Cheney did an interview with ABC News. Getting a lot of attention because he said picking Sarah Palin as a running mate in 2008 was a mistake. Part One aired yesterday.  I've got to say, they ended this first installment with a pretty big cliffhanger.


Cut to clip of Cheney making his remarks about the Palin pick, followed by the doctored footage of Palin seeming to line Cheney up for a shot with a high-powered rifle as he walks across a lawn with ABC's Jonathan Karl.

Then back to Morning Joe.