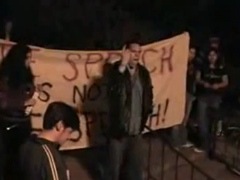 Which is more newsworthy: hearsay accounts of racial slurs unsupported by video evidence of the alleged incident, or video of a protester calling for violent revolution against the federal government, the imposition of socialism, and the annexation of the Southwestern states for Mexico?

If you chose the latter, you're probably not a journalist of the self-proclaimed "mainstream" variety. The legacy media has been largely silent on video of Los Angles schoolteacher at a La Raza protest of the recently-passed Arizona immigration law literally calling for the violent overthrow of the United States government.

"There's 40 million potential revolutionaries north of the border, inside the belly of the beast," Los Angeles high school history teacher Ron Gochez told a frenzied crowd, referring to the 40 million Latin Americans in the United States. He went on to claim that teaching or writing a book "is not part of the movement," and that his followers needed to go a step further -- to literal revolution (video embedded below the fold - h/t Jawa Report).


Does this man represent a fringe element of the pro-illegal immigration protesters? Probably. Has an individual's fringe status ever stopped the media from reporting on the outlandish things a couple Tea Party attendees have said? Of course not. Often those statements are taken as evidence that the movement is nothing more than a bunch of potentially-violent racists clinging to their God and guns.

The clip above shows a man actually advocating violence. There is no ambiguity about it. He obviously has a deep hatred of capitalism -- which can reasonably be described as far more radical than a deep hatred of socialism. And this man is a high school history teacher!

The response from the mainstream press: [crickets].

Where are the journalists that were so worried about political violence stemming from the Tea Party?

Why is Mark Potok of the Souther Poverty Law Center not appearing all over cable television to decry the anti-government violence La Raza is advocating?

Where is Bill Clinton to pontificate on the dangers of heated rhetoric and the potential that it could spill over into actual violence? And where are all the media talking heads that were so eager to parrot the former president's politicized warnings?

The alleged spitting incident on the steps of the Canon House Office Building was enough to whip media liberals into a frenzy. With the N-words supposedly hurled at Rep. John Lewis, it made for a perfect anti-Tea Party media meme, despite the total lack of evidence supporting the claims.

MSNBC's prime time lineup was one four-hour doomsaying sermon on the dangers of "right-wing extremism." But so far that channel is eerily silent on this man's heated calls for a violent uprising.

Pictures of a sign at a Tea Party rally quoting Thomas Jefferson's famous "water the tree of liberty with the blood of patriots and tyrants" statement were paraded around as an undeniable sign that the Tea Party movement was out to overthrow -- violently, if necessary -- the political order.

Leftist accounts of the Tea Party are replete with accusations of racism. But where is the outrage over this La Raza protester's use of the phrase "frail ... white people"?

Even Sarah Palin's use of crosshairs on a map of November's target congressional districts was touted by many media liberals as a sign that conservatives have an inherently violent attitude towards politics. And yet, the same journalists haven't drawn any similar conclusions about the radical pro-illegal immigration movement that, as we've just seen, actually calls for violent revolt.