On Thursday's NBC Nightly News, anchor Brian Williams proclaimed: "Protesters across the country and a lot of Americans who are sympathetic to this Occupy Wall Street protest movement are tonight rallying around a 24-year-old Iraq war veteran who was seriously injured during a violent confrontation with police in Oakland, California on Tuesday."

In contrast to NBC and ABC taking accusations from the protesters as fact, on the CBS Evening News, anchor Scott Pelley was more cautious in a news brief on the incident: "Anti-Wall Street protestors accused police of using excessive force. The confrontation left Iraq war veteran Scott Olsen with a fractured skull. But it's not clear how Olsen was injured or who was responsible." 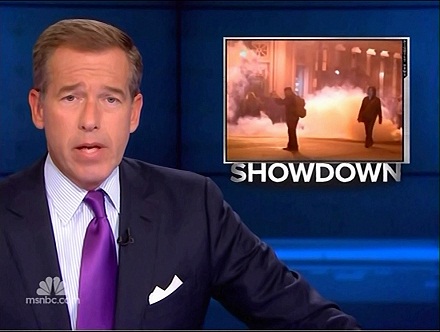 In the Nightly News report, correspondent Migeul Almaguer blamed Oakland police for the violence: "Oakland police tactics have come under scrutiny." A sound bite was included from fellow Iraq war veteran Jordan Towers: "I was shocked that in this country they would do that to a peaceful protester. Scott was out here protesting peacefully." No mention was made of protesters throwing rocks and bottles at police.

Almaguer went on to announce: "Now Olsen's story is rallying Occupy protesters across the country....Tonight in many cities the Occupy movement appears energized."

On World News, Boudreau made a similar observation: "And not far from any of their minds, Scott Olsen, giving them a whole new reason to fight."

NBC's coverage was particularly propagandist as Williams introduced the next story on the broadcast:

That protest slogan from the '60s, "The whole world is watching," well, it's never been as true as it is right now. The pictures from inside these protests that the news media show, often originate from social media. And while police are increasingly getting called out these days for their behavior, remember, we can now see more of their behavior than ever before and they are under close scrutiny as NBC's Mike Taibbi reports.

Taibbi proceeded to list a handful of recent instances of police officers caught on tape being overly aggressive, including: "At the start of New York's Occupy Wall Street protests, a police inspector fires his pepper spray at a clearly nonviolent crowd."

Taibbi noted: "What is understood by the ACLU is that while there may not be more of these incidents, more of them without question are being caught on tape. That raises some next level in the age old interactions between law enforcement and the public."

At the end of his report, Taibbi offered the police perspective: "But it is also true that civilians in this post-9/11 world are arming themselves with tasers and mace and pepper spray, and that much of the video posted for the world to see only shows what's always been true about how legitimate police work often looks."

Sound bites were included from former New York and Los Angeles police commissioner: "We have an expression in policing, 'Lawful but awful.' Unfortunately, certain police actions, when they have to use force to make a lawful arrest, don't look good."

Filling in for Matt Lauer on Friday's Today, Brian Williams expressed more sympathy for Occupy Wall Street as he wondered how Thursday's stock market rally would benefit them:

...in lower Manhattan and in cities across this country we have people who spent a cold night outside because they are committed to this cause. They are the 99-percenters, if you listen to their rallying cry. What's in these stats for them? What do you say to them about the effect of a good run on Wall Street, outside of which they're camped out?

BRIAN WILLIAMS: Protesters across the country and a lot of Americans who are sympathetic to this Occupy Wall Street protest movement are tonight rallying around a 24-year-old Iraq war veteran who was seriously injured during a violent confrontation with police in Oakland, California on Tuesday. Our report tonight from NBC's Miguel Almaguer.

MIGUEL ALMAGUER: In Oakland Tuesday, 24-year-old marine Scott Olsen was hit by what witnesses say was a police projectile. Friends rushed to his aid.

UNIDENTIFIED PROTESTER A [WEARING A BANDANA OVER HIS FACE]: We asked him his name multiple times.

UNIDENTIFIED PROTESTER B: What's your name?

PROTESTER A: But he wasn't responding. So we took him to the medic.

ALMAGUER: Olsen, who survived two tours of duty in Iraq, was critically injured with a fractured skull.

JORDAN TOWERS [IRAQ WAR VETERAN]: I was shocked that in this country they would do that to a peaceful protester. Scott was out here protesting peacefully.

HOWARD JORDAN [OAKLAND POLICE DEPARTMENT]: We want to make sure there is a thorough and complete job and a complete comprehensive review is done of the incident.

ALMAGUER: Like other veterans and thousands of protesters, friends of Olsen say he was demonstrating against a wide range of issues.

JASON MATHERNE [SCOTT OLSEN'S FRIEND]: He's just expressing his First Amendment right and his conviction that the corporate greed and the wars in Iraq and Afghanistan need to come to an end.

ALMAGUER: In New York, they shouted "Oakland" as hundreds marched to city hall.

ALMAGUER: From Portland to Los Angeles.

UNIDENTIFIED PROTESTER D: Scott Olsen is a hero for standing with the people.

ALMAGUER: Tonight in many cities the Occupy movement appears energized. Scott Olsen's family arrived here in the Bay area from Wisconsin to good news. He's been upgraded to fair condition. Meantime, the demonstrators say they plan to go nowhere here in San Francisco. They'll hold a vigil for Olsen later on tonight. Brian.

WILLIAMS: Miguel, it's bracing to hear that call for a medic here in the states for a guy who survived combat overseas. Miguel Almaguer, in the Bay area tonight, thanks. 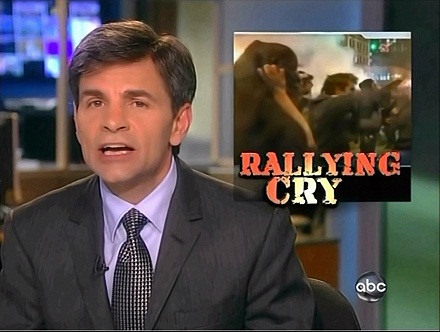 GEORGE STEPHANOPOULOS: And today's rally on Wall Street probably won't soothe, it could even intensify, the Occupy Wall Street movement that's spread across so much of the country. And tonight, one young man has become a symbol of their resolve. A 24-year-old Iraq war veteran, now in serious condition in a California hospital, his skull fractured after a violent run-in with police. ABC's Abbie Boudreau has more.

ABBIE BOUDREAU: With tensions mounting daily, the name Scott Olsen has become a national rallying cry for Occupy Wall Street. Olsen, who had joined protestors after work, was injured Tuesday night, as police began firing tear gas during the Oakland crackdown. People who came to his aid were then scattered by a gas canister tossed by police.

Last night in New York, protesters marched in solidarity with Olsen, leading to a tense confrontation with police and ten arrests. Today, the police union said it had shown restraint but would now sue any protester who injured an officer. That's because an estimated 70,000 people nationwide have joined in demonstrations since last weekend. Atlanta's mayor:

KASIM REED: We know for a fact that we have crossed the $300,000 threshold in terms of dollars spent.

BOUDREAU: Across the country, the costs are soaring. In New York City, overtime expenses, $3.4 Million. $2 Million in Boston and counting. In Minneapolis, the sheriff's department reports spending $200,000 so far. And in San Francisco, the bill is more than $100,000. And Debra, who's been out of a job for two years, says she's not budging. How long do you plan on staying here, in a tent?

DEBRA: As long as I have to. I don't plan on leaving unless I'm forced or taken to jail.

BOUDREAU: And not far from any of their minds, Scott Olsen, giving them a whole new reason to fight. Abbie Boudreau, ABC News, San Francisco.