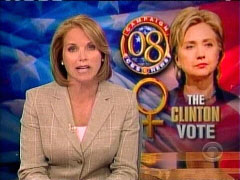 As reported by FishBowl DC at mediabistro.com, CBS "Evening News" anchor Katie Couric was honored at a luncheon held by Sewall-Belmont House and Museum in Washington DC on Wednesday and remarked: "However you feel about her politics, I feel that Senator Clinton received some of the most unfair, hostile coverage I’ve ever seen."

One of the great lessons of that campaign is the continued and accepted role of sexism in American life, particularly in the media. Many women have made the point that if Senator Obama had to confront the racist equivalent of an "iron my shirt" poster at campaign rallies, or a Hillary nutcracker sold at airports, or mainstream pundits saying they instinctively cross their legs at the mention of her name, the outrage would not be a footnote. It would be front-page news.]

Couric of course has a long history of defending Hillary Clinton against such "hostility."When Couric talked to Ohio voters in March who were concerned about Clinton’s crying prior to the New Hampshire primary, Couric jumped in with: "But some of the male candidates, like Mitt Romney, have gotten misty eyed as well." In a February "60 Minutes" interview, Couric tossed the New York Senator softballs like: "What were you like in high school? Were you the girl in the front row taking meticulous notes and always raising your hand?"

Most recently, in a June 5 interview with Barack Obama, Couric pushed for Clinton as the VP: "In our latest poll, 59% of Democratic primary voters, including 46% of your voters, think you should select Senator Clinton to be your running mate. So in the spirit of Kennedy picking Johnson and Reagan choosing Bush, why not pick Senator Clinton?" In addition, at the end of a story about Clinton supporters on June 3, Couric declared: "By the way, a new CBS News poll shows many voters nationwide believe Clinton faced an uphill battle because of her gender. We asked, ‘Who faces more obstacles in presidential politics?’ -- 46 percent said a woman candidate, 32 said a black candidate."