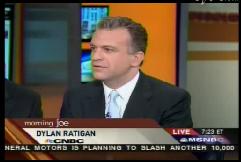 A prominent CNBC personality that had been outspoken about the media's role in the current financial crisis, himself included, has reportedly left CNBC.

A spokesman for CNBC told NewsBusters Dylan Ratigan, the co-creator of one of the network's most popular shows, "Fast Money," is leaving the network effective March 27.

"Dylan told us that he is leaving CNBC effective today," CNBC spokesman Brian Steel said in an e-mail. "We thank him for his quality work and wish him well."

The New York Post reported Ratigan's departure was due to friction between he and Susan Krakower, an executive at the network.

The Associated Press also reports Ratigan is a candidate for a job at ABC News and would bolster that network's business coverage that already includes Bianna Golodryga and Betsy Stark.