On Saturday, America's most prodigious race-baiting reverend and host of MSNBC's PoliticsNation, Al Sharpton, reupped the tiresome, race-centric narrative that the Senate filibuster has only exist to bolster white racists and urged his viewers to contact their senators to demand its permanent elimination. During the four-minute "Rise Up" segment, Sharpton ripped Senate Minority Leader Mitch McConnell (R-KY) and other Republicans for effectively using the filibuster during President Obama's two terms.

Of course, Sharpton failed to mention which bills, specifically, senators chose to filibuster from 2009 to 2016 or why they did so (or any instance of what the downside would be for Democrats if Republicans regained power). Instead, he provided a brief, and somewhat misleading, history lesson on the origination and historical usage of the filibuster, and he delineates it as an “an age-old impediment to democracy and civil rights” in American and referred to it as a "Jim Crow relic." Following Sharpton's description, you'd think the word "filibuster" was a synonym for a whites-only drinking fountain still in operation today.

It's not; the term filibuster became popular in the middle of the 19th century and is a technique utilized by senators to prevent or delay a vote on a bill. A filibuster can be overcome by invoking cloture, which requires sixty votes.

Sharpton then discussed how the filibuster was utilized by Strom Thurmond (SC) for twenty-four hours and eighteen minutes in order to delay “progress toward equality for black Americans for years.” Sharpton left out the fact that Thurmond was a Democrat until joining the Republican Party in 1964. The filibuster Sharpton alluded to occurred in 1957.

Sharpton also neglected to point out that in 2019, then-Minority Leader Chuck Schumer (D-NY), utilized a party-line filibuster to preclude a debate from occurring regarding the Trump administration's Pentagon budget.

“The filibuster has always represented a tyranny of the minority over the majority,” exclaimed Sharpton.

Got that? The filibuster is only racist and repressive when Republicans use it. 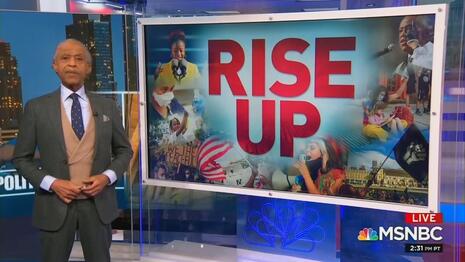 Sharpton bashed McConnell for not showing “comity,” but McConnell did, in fact, show both comity and consistency on his position pertaining to the filibuster.

In a 2019 column for The New York Times, McConnell described the importance of not getting rid of the filibuster—irrespective of which party holds the majority. "I recognize it may seem odd that a Senate majority leader opposes a proposal to increase his own power," wrote McConnell. He concludes his opinion piece by stating that whichever party were to eliminate the filibuster would "regret it a lot sooner than they think." McConnell's intellectual consistency didn't fit Sharpton's narrative; therefore, he left it out:

“The fifty Democratic senators represent 40 million more American than their 50 Republican counterparts. And because GOP senators are from overwhelmingly smaller and whiter states, their threat to filibustering President Biden's entire agenda must be understood for what it is: a white minority standing in the way of progress and equality for the multi-racial majority.”

While racial harmony is something we all should strive to ensure as we unite behind our love of country and the Constitution, it's important to point out Sharpton’s assertion that America is a “multi-racial majority” was demonstrably false as whites still comprise a majority in the United States.

Sharpton concluded by imploring that his viewers “[c]all, write and email” their senators and urge them to eliminate the filibuster.

The fallacious history lesson and leftist propaganda promulgated by Sharpton was sponsored, in part, by Lincoln. You can contact this advertiser, and others, via the Media Research Center’s Conservatives Fight Back page conveniently linked here.

AL SHARPTON: For this week’s edition of “Rise Up,” I’m taking aim at an age-old impediment to democracy and civil rights in America—the filibuster. For those unfamiliar with the term, it's a Senate procedure that allows a minority of just 40 senators to block legislation from coming up for a vote, even when that bill is supported by a majority. Newly demoted senate minority leader Mitch McConnell is a staunch defender of the filibuster, of course. And he issued a warning against its elimination, this week.

[CUTS TO CLIP OF MITCH MCCONNELL]: If the Democratic majority were to were to attack the filibuster, they would guarantee themselves immediate chaos.

[CUTS TO A LATER CLIP OF MITCH MCCONNELL]: Destroying the filibuster would drain comity and consent from this body to a degree that would be unparalleled in living memory.

SHARPTON: There's a lot of hypocrisy to unpack here, and I will have much more to say to the minority leader in a segment tomorrow, but let's start with the laughable idea there's ever been much comity and consent in the Senate. The upper chamber likes to portray itself as dignified and respectful, but that hasn't always been the case. Where, for instance, was McConnell’s call for comity when President Obama was in office? Republicans used and abused the filibuster so much during the last Democratic administration, they shattered records, leading the solid 44th Commander in Chief to make this call for its elimination as late as last summer at the funeral of the late, great John Lewis.

[CUTS TO CLIP OF FORMER PRESIDENT OBAMA SPEAKING AT JOHN LEWIS’ FUNERAL]: And if all this takes eliminating the filibuster—another Jim Crow relic—in order to secure the God-given rights of every American, then that’s what we should do.

SHARPTON: Indeed, the filibuster is a relic from the darkest days of Jim Crow. In the half century following the premature end of reconstruction, dozens of anti-lynching bills were filibustered out of existence and not a single substantial civil rights bill became law. All because of an arcane rule wielded by a racist southern minority in the Senate. Indeed, the longest-ever filibuster was completed by perhaps the country's most famous segregationist. In 1957 Senator Strom Thurmond filibustered a civil rights bill for over 24 hours, effectively delaying progress toward equality for black Americans for years. The filibuster has always represented a tyranny of the minority over the majority. A demographic change in the current Senate breakdown has made it more unconscionable than ever. The fifty Democratic senators represent 40 million more American than their 50 Republican counterparts. And because GOP senators are from overwhelmingly smaller and whiter states, their threat to filibustering President Biden's entire agenda must be understood for what it is: a white minority standing in the way of progress and equality for the multi-racial majority. And since this segment is called “Rise Up,” here's what you can do about this miscarriage of justice. Call, write and e-mail your senators. If you have a Republican senator, tell them that any abuse of the filibuster will strengthen your resolve to organize against them in their next campaign. If you have Democratic senators, particularly if you live in West Virginia, Arizona where your senators are filibuster holdouts, tell them you want them to eliminate this Jim Crow relic. It might seem intimidating, but remember, whether you voted for them or not, your senators work for you and eliminating the filibuster might be the only way the Senate works at all. We'll be right back.