As historian and MSNBC contributor Jon Meacham appeared as a guest on Friday's Real Time with Bill Maher on HBO, he repeatedly made references to racist public figures or groups from history like George Wallace and the KKK as he discussed modern-day political battles and President Donald Trump. At one point, he lectured about American history: "But the forces the President embodies -- and the forces that he marshaled and managed to become President -- are perennial ones. The American spirit isn't just about Martin Luther King Jr.-- it's also about the Klan. And the battle is between those two."

On Sunday's Fareed Zakaria GPS on CNN, host Zakaria seemed to be doing an impression of the type of super-biased political panel one would expect to find at MSNBC in the form of four liberals pitted against one moderate Republican and no conservatives discussing the role of racism in opposition to President Barack Obama. New Yorker editor David Remnick charged George H.W. Bush used "racist memes" to win the 1988 presidential campaign and racism has fueled Donald Trump's rise.

The Esquire blogger opines that the GOP is “the Political Party Of Dorian Grey. Steve Scalise is the public face. But, up in the corner of the attic, there's a portrait of the rotting, decomposing corpse of Strom Thurmond.”

Serious question: if he ever had it, has Ed Schultz totally lost it?  There's lots to be said about the Occupy Wall Street movement.  But of all the cockamamie comments, of all the nutty non sequiturs, surely Ed Schultz's takes the crazy cake.

On his MSNBC show tonight, Schultz claimed that what lies behind Republican criticism of Occupy is . . . racism.  In a beyond-bizarre analogy, Schultz somehow said that there's "no difference" between GOP congressman Peter King's criticism of Occupy Wall Street and Trent Lott's 2002 birthday-party praise for Strom Thurmond. Video after the jump.

The New York Times marked the death early Monday morning of veteran Democratic Sen. Robert Byrd of West Virginia, who served a record 51 years in the U.S. Senate, with an online obituary by former Times reporter Adam Clymer. While acknowledging Byrd's Klan past and his pork-barrel prodigiousness, Clymer's lead also emphasized Byrd's proud fight as the keeper of Congressional prerogatives. The obituary headline was hagiographic: "Robert Byrd, Respected Voice of the Senate, Dies at 92."

Robert C. Byrd, who used his record tenure as a United States senator to fight for the primacy of the legislative branch of government and to build a modern West Virginia with vast amounts of federal money, died at about 3 a.m. Monday, his office said. He was 92.

The bulk of Clymer's obituary for Byrd may have been written some time ago, as is customary. Clymer retired from the Times in 2003, after a career of bashing President Bush and prominent conservatives, while defending old-guard Democrats like Sen. Ted Kennedy.

Clymer acknowledged what he called Byrd's changing perspective, moving from conservative to liberal over the years, and in the 16th paragraph brought up Byrd's membership in the Ku Klux Klan in the 1940s and his filibuster of the 1964 Civil Rights Act.

Barnicle Can't Bring Himself To Mention Byrd's Klan Past 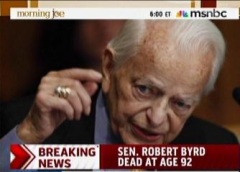 When Republican Sen. Strom Thurmond died, the MSM was quick to stress his segregationist past. The New York Times ran the headline "Strom Thurmond, Foe of Integration, Dies at 100," leaving readers to imagine the South Carolinian had remained an advocate of segregation.  The very first line of USA Today's story described Thurmond as "the nation's most prominent segregationist."

Strange how the MSM can suddenly become reticent about mentioning someone's segregationist past when the late politician in question is a Democrat.  On Morning Joe today, Mark Halperin and Mike Barnicle used elliptical language worthy of a State Department dispatch to avoid mentioning that Byrd had been a member and leader of the Ku Klux Klan. H/t NB reader Ray R.

On Monday’s The O’Reilly Factor on FNC, during the show’s regular "Reality Check" segment, host Bill O’Reilly highlighted the double standard exhibited by President Barack Obama and other prominent Democrats in the way they reacted so strongly to former Republican Senator Trent Lott’s praise of former Senator Strom Thurmond at his birthday celebration in 2002, and the President's recent more forgiving words about Senate Majority Leader Harry Reid’s "Negro dialect" remark. O’Reilly quoted Obama’s unforgiving statement from 2002 regarding Lott, and then showed his recent statement giving Reid a pass. The FNC host also showed quotes of Democratic Senators Mary Landrieu and Debbie Stabenow from the Lott episode and noted their current unwillingness to comment on Reid.

Below is a transcript of the relevant portion of the Monday, January 11, The O’Reilly Factor on FNC:

Andrea Mitchell: Teddy 'Hero' But Strom Not Alive Even in Senate

Two veteran members of the Senate, two entirely different treatments from Andrea Mitchell.  Reverence for Ted Kennedy; scorn for Strom Thurmond. Guest hosting in Mika Brzezinski's spot on Morning Joe today, Mitchell, emotion in her voice, hailed Kennedy as "valiant" and a "hero."  As for Thurmond, Mitchell mocked that he wasn't alive even when he was in the Senate.

The reference to the late South Carolina senator arose in the context of a discussion of the way in which, with the nomination of Barack Obama, the torch of Dem leadership has been passed to a new generation, whereas the same isn't true in John McCain's GOP.

There's no question Strom Thurmond had a racist past, some of which he later disavowed but when Chris Matthews claimed the late South Carolina governor and senator "hanged a few people," on the 7pm edition of Monday's, "Hardball" just what was the MSNBC host implying? Matthews seemed to be claiming that the former Democrat turned Republican senator was personally involved in lynchings.

The following exchange occurred during a discussion on the December 10, "Hardball" with Newsweek’s Howard Fineman about Oprah Winfrey stumping for Barack Obama in South Carolina: