Despite over 18 minutes of coverage of the past week on the skyrocketing cost of EpiPens by over 400 percent, ABC and CBS have failed in their duties to note that the pharmaceutical company CEO being called out for raising the price while hiking her own compensation to almost $19 million is also the daughter of Democratic Senator Joe Manchin (W.V.).

Further, the two networks and NBC have collectively neglected to reveal that Mylan Pharmaceuticals has partnered in the past for medical aid with the Clinton Foundation and given money as well to the scandal-ridden foundation.

CBS This Morning was the first network newscast to cover the massive price increase from $90 for a two-pack to an exorbitant $608 back on August 16 and, along with the CBS Evening News with Scott Pelley, have spent 12 minutes and 52 seconds over four segments. However, none have mentioned either link to Manchin or the Clinton Foundation.

The story has been much the same on ABC with the exception of arriving on the scene a few days later on August 21's World News Tonight, but have dedicated four segments overall to it (with Good Morning America) to the tune of five minutes and 26 seconds, but gave zero nods to either liberal political or charity.

Over on the top Spanish-language networks, Telemundo and Univision have also declined to provide this information about Bresech to their viewers. On Wednesday night, the two combined for four minutes and 30 seconds of coverage on the EpiPen story without a nod to Manchin.

As for NBC, Today and NBC Nightly News dithered away four minutes and 37 seconds over two stories on Tuesday night and Wednesday morning before a Wednesday story by correspondent Tom Costello on NBC Nightly News mentioned Bresech’s link to Manchin, but stumbled short of the finish line when Costello and anchor Lester Holt refused to label Manchin a Democrat.

“Now, we learning more about the company and the CEO, the daughter of a U.S. Senator, whose own compensation has grown to nearly $19 million,” Holt explained in his lead-in to Costello’s story halfway through the newscast.

Costello couldn’t muster reporting that Manchin’s a Democrat, but he provided a look at how Bresch is an extremely wealthy pharmaceutical CEO despite being stripped of her MBA in a scandal that cost the president of her alma mater his job:

CEO Heather Bresch is the daughter of West Virginia Senator Joe Manchin. When Manchin was governor, she received an MBA from the West Virginia University, later rescinded, the university president forced out when investigators determined she had not finished the coursework. More recently, Bresch stoked controversy by relocating Mylan’s headquarters to the Netherlands where the tax rate is lower.

Meanwhile, media outlets like Daily Caller, The Wall Street Journal, and even The New York Times have been doing the legwork on the Clinton Foundation connection to Mylan that ABC, CBS, and NBC have refused to do. According to the Daily Caller’s Chuck Ross:

EpiPen injections, which help stop potentially fatal allergic reactions, cost $57 in 2007. They now run $609. According to CNBC, the price of EpiPens has increased at a steady rate in those nine years.

The Clinton Foundation partnered with Mylan at a time when it was raising prices on the EpiPen, which had been distributed by Merck.

Ironically, the company partnered in 2009 with the Clinton Foundation to provide a lower-cost alternative for four HIV drugs. Clinton Foundation records show that Mylan has donated between $100,000 and $250,000 to the Foundation. It is not clear when the donation was made, but it likely corresponded with the 2009 partnership.

The transcript of the segment from August 24's NBC Nightly News can be found below. 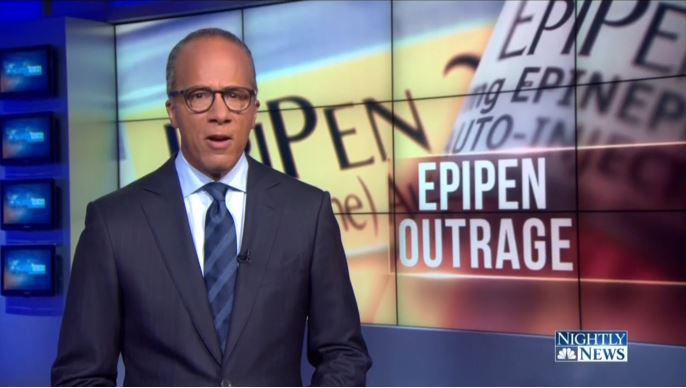 LESTER HOLT: Tonight, there is a growing anger against a major U.S. drug company for ring the price of a life-saving medication by more than 400 percent over the past eight years. As we reported here last night, millions of Americans, especially children rely on EpiPens in the event of a potentially fatal allergic reaction. Now, we learning more about the company and the CEO, the daughter of a U.S. Senator, whose own compensation has grown to nearly $19 million. Here’s NBC’s Tom Costello.

TOM COSTELLO: Perhaps because it involves the EpiPen, used most commonly to save children having allergic reaction, the backlash against Mylan Pharmaceuticals is growing fast. In 2006, Mylan charged pharmacies $90 for an EpiPen two pack. In 2010, the price was $150. Then $300, $400, $500, and now, with a near monopoly, $608. Now, bipartisan outrage.

DEMOCRATIC SENATOR RICHARD BLUMENTHAL (Conn.): This price gouging, there’s no other term for it, is morally bankrupt. 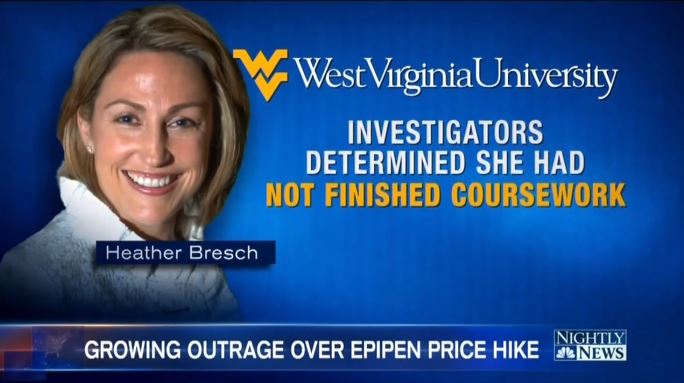 COSTELLO: This week, Mylan told NBC News the price change “better reflect[s] product features and the value the product provides.” The CEO of Mylan is Heather Bresch. As the price for the EpiPen rose, so did her total compensation going from $2.4 million to nearly $19 million. CEO Heather Bresch is the daughter of West Virginia Senator Joe Manchin. When Manchin was governor, she received an MBA from the West Virginia University, later rescinded, the university president forced out when investigators determined she had not finished the coursework. More recently, Bresch stoked controversy by relocating Mylan’s headquarters to the Netherlands where the tax rate is lower.

WHITE HOUSE PRESS SECRETARY JOSH EARNEST: Pharmaceutical companies that often try to portray themselves as the inventors of life-saving medication often do real damage to their reputation by being greedy and jacking up prices.

COSTELLO: Mylan has raised prices on other drugs, too, some by 4 to 500 percent. Tonight, no comment from the company, CEO Bresch or Senator Manchin. Tom Costello, NBC News, Washington.