In addition, Stephanopoulos failed to preface at the onset of a Hillary Clinton interview for the second time in less than a week his ties to the Clinton administration and his numerous donations to the Clinton Foundation.

Stephanopoulos only asked one question on Iran and the authoritarian country’s decision to release five Americans being held in captivity and it involved two potential Republican opponents:

[F]irst, the news that American hostages from Iran are heading home this morning. Donald Trump not giving the President any credit and Marco Rubio says it’s going to create incentives for other U.S. adversaries to take hostages. Does he have a point?

Turning to the campaign, Stephanopoulos asked about how an ally had called for Bernie Sanders to release his medical records with Clinton dismissing the matter to her old friend by telling him that he’s “been around long enough to know” that this is part of running a campaign:

STEPHANOPOULOS: Let's get to the campaign right now, strange series of events yesterday. The super PAC coordinating with you put out word they would demanding the release of Bernie Sanders' health records. Sanders’ campaign struck back, calling that vile. Your campaign disavowed it. It appeared to go away. So, what is relevant here and what's not? Should aging health be an issue in this campaign?

HILLARY CLINTON: Oh, look, I put out my medical records. You've been around long enough to know, George, this is all part of expectation.

Of course, this whole discussion ignored the fact that the Clintons themselves have made the health of their opponents an issue in the past with perhaps the best example being husband Bill taking on Bob Dole in 1996.

The interview ended with pedestrian questions on whether single-payer health care would work if it passed Congress and Clinton responding to the latest ad from the super PAC started by Karl Rove (American Crossroads).

Perhaps the biggest contrast to this was the one Jake Tapper conducted with Clinton on CNN’s State of the Union. Tapper brought up the Iran deal (but it was criticism of her by an American formerly held captive in Iran) and Sanders’ medical records, but Tapper went onto corner Clinton with footage of her in 1994 supporting single-payer health care and then asking if her criticism of Sanders was valid. 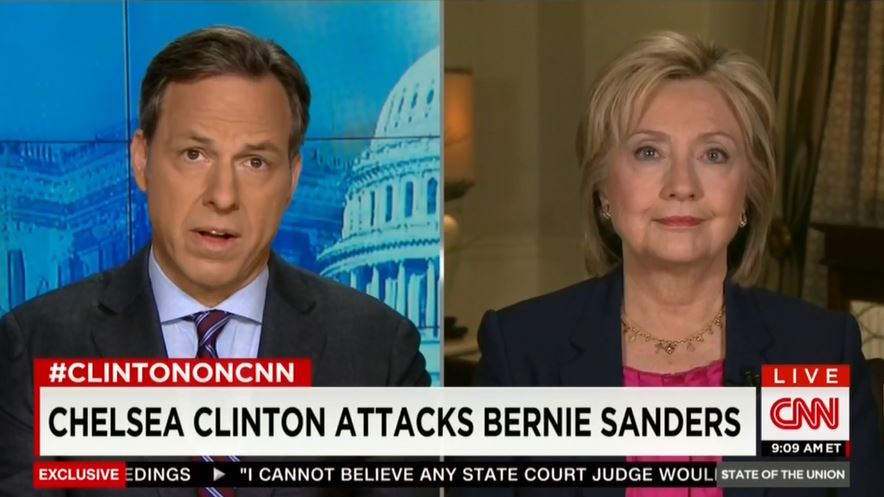 One topic that CBS’s Dickerson, NBC’s Todd, and CNN’s Tapper did question Clinton on was her daughter Chelsea’s attack on Sanders at a campaign event last week with Tapper repeatedly grilling Clinton:

TAPPER: For years, you have been very protective of your daughter, Chelsea Clinton, especially when she was a child, of course, and now she's a grown woman. This week, she surprised a lot of people when she unleashed one of the most scathing attacks of the cycle, accusing Bernie Sanders of wanting to empower Republican governors who might then cut people's health care. PolitiFact called Chelsea's remarks mostly false. Former Obama adviser David Axelrod said it was not an honest attack. And liberal columnist Mark Shields said the attack turned your daughter into a, quote “political hack.” Do you think it was a mistake to muddy up Chelsea like that?

TAPPER: So, no regrets about using Chelsea that way?

TAPPER: Okay. PolitiFact said it was mostly false, but let's move on.

Further, Tapper mentioned the release of the movie 13 Hours: The Secret Soldiers of Benghazi and got her to admit that she’s “just too busy campaigning” to see the movie as well as received a “no” answer when he asked if she’s been interviewed by the FBI yet concerning her private e-mail server.

Meanwhile, CBS’s Dickerson and NBC’s Todd used the tension between Clinton and Sanders to hit the former Secretary of State from the left on health care and gun control. In Dickerson’s interview, the Face the Nation host wanted to know from Clinton how she’s “evolved over the years” on gun control.

Along with a question on the water crisis in Flint, Michigan, Dickerson pleaded with Clinton for her campaign to think more before attacking Sanders on health care: “Aren't — isn't she and your campaign not taking into account that those things would be replaced by an actual plan that Senator Sanders has put forward?” 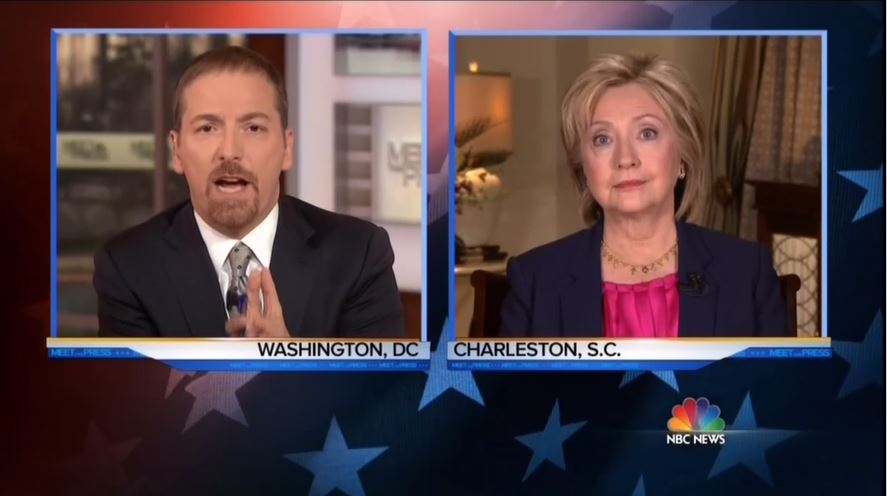 As for Todd, the Meet the Press moderator confronted Clinton with video of skeptical Iowa Democrats and concerns that she might not win Iowa due to a large strain of liberal caucus-goers leaning more toward socialism than capitalism.

Todd asked twice about the continued conflicts in Chicago involving police, the African-American community and former White House Chief of Staff/Democratic Mayor Rahm Emanuel before ending with a Benghazi question: