It has been over three weeks since The New York Times published a front-page investigation unmasking the actions of New York Governor Andrew Cuomo (D) shuttering an anti-corruption commission. In reaction, the U.S. Attorney has now begun investigating Cuomo’s administration for possible “witness tampering and obstruction of justice,” according to The New York Post.

Despite these serious allegations, CNN has all but ignored the story. The cable news outlet completely ignored the Cuomo scandal until it aired a single tease and report on August 7 during The Situation Room with Wolf Blitzer.

In stark contrast, when a scandal involving the administration of New Jersey Governor Chris Christie (R) erupted in January, CNN provided wall-to-wall coverage. In the first full day of coverage on January 9, CNN spent a whopping eight hours and 35 minutes covering the Christie story. This is nearly 150 times more coverage in a single day than CNN’s entire coverage of the Cuomo investigation thus far (just three minutes and 34 seconds). Without factoring in commercials, this number accounts for nearly 57 percent of its 15-hours of programming from 6:00 a.m. to 9:00 p.m. ET, when the network switched to a pre-taped documentary.

When the Christie scandal was just hours old, CNN had the audacity to criticize Fox News for not immediately leaping onto the story. While teasing an upcoming segment with the host of CNN’s Reliable Sources, Brian Stelter, New Day co-anchor Chris Cuomo jabbed at his competitor:

After an unrelated segment, New Day co-anchor Kate Bolduan added her own tease to the Stelter segment: “The major networks are all over the story. It's a huge political story, but it has some wondering, is Fox News looking the other way?” 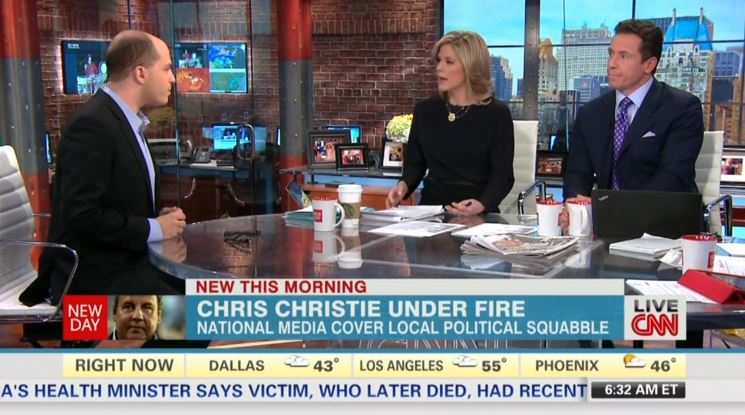 When the segment did air, Cuomo, Stelter and Bolduan suggested a reason for FNC’s supposed delay was FNC President Roger Ailes’ reported admiration of Christie and that would give reason for concern regarding the cable channel’s coverage. Stelter even wondered aloud if FNC would be taking the story "more seriously or not" that day. Yet CNN waited 16 days after The New York Times exposed Governor Cuomo’s scandal before they would even acknowledge it on air. Wouldn't it be fair for other networks to speculate that the reason for their delay was the fact that CNN’s morning news anchor is the Democratic governor’s brother?

The lack of coverage on CNN is even more stunning when compared to their cable news competitors MSNBC and Fox News Channel (FNC). Since the scandal broke through August 14, the Cuomo scandal has been mentioned 15 times on MSNBC and 10 times on FNC. The scandal was even highlighted on The Daily Show with Jon Stewart on July 24.

When looking at coverage from the major broadcast networks, CNN’s streak of ignoring the Cuomo scandal carried over with two exceptions. One exception is on PBS, where it was mentioned once on Charlie Rose on July 23 during an interview with the U.S. Attorney for the Southern District of New York, Preet Bharara. The other exception is CBS, which has so far devoted 3 minutes, 36 seconds to the Cuomo scandal – one full report on August 1, plus three brief updates on July 31, August 4 and August 6, all on CBS This Morning. The CBS Evening News has not acknowledged the Cuomo scandal, while it hasn't been mentioned on any ABC or NBC news program.

The Cuomo scandal revolves around an anti-corruption commission known as the Moreland Commission, which Cuomo set up in summer 2013 to, “root out corruption in state politics” after the state government had been “rocked by a seemingly endless barrage of scandals and arrests,” according to The New York Times in the July 23 investigation. The paper reported that just over two months into its existence, commission investigators “developed of lists of promising targets,” but was ended when it looked into “groups with ties to Mr. Cuomo or on issues that might reflect poorly on him” only “halfway through what he had indicated would be an 18-month life.” Cuomo pushed back strongly against the allegations of abuse and subsequent investigation in a press conference on July 28, which received zero live coverage on either the cable or broadcast networks. 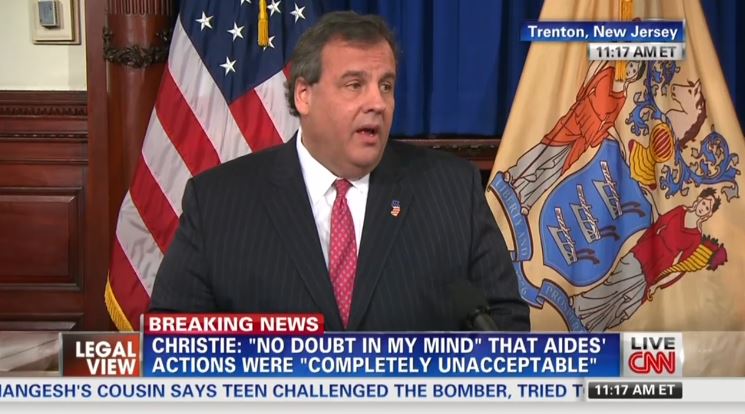 In New Jersey, the scandal now known as Bridgegate originated in September 2013 when a number of lanes were closed on the George Washington Bridge, which connects Fort Lee, New Jersey and New York City’s Manhattan. The closure resulted in massive traffic jams and backups that lasted for five days before the lanes were reopened. The Port Authority of New York and New Jersey stated initially that the closures were due to a traffic study being conducted. An investigation into the matter was launched by the New Jersey Assembly transportation committee and by January 8, 2014, it became known that members of Christie’s staff appeared to have played a role in the lane closures. On January 9, Christie held a press conference with reporters that lasted over an hour and a half. That day, Christie also announced the firing of his Deputy Chief of Staff, whose emails with a Port Authority official dating back to August 2013 contradicted claims that his administration had no involvement. Unlike Cuomo’s remarks, CNN carried the press conference in its entirety.

Across the political spectrum, columnists, pundits, and reporters are all giving notice to the story. On July 28, Morning Joe panelist and Bloomberg Politics managing editor Mark Halperin remarked that “if this level of facts existed about, say, a Chris Christie, this story would be on the networks evening newscasts every night” and that “[i]t’s a huge controversy, a huge scandal.” MSNBC’s weekend morning show, Up with Steve Kornacki, has mentioned the scandal three times alone, including a segment on August 2 that lasted seven minutes and 53 seconds.

Writing in The Washington Times on Wednesday, Monica Crowley said this about the disparity in coverage between the two scandals: “If there were ever a case of classic leftist media bias, the treatment of Gov. Chris Christie of New Jersey and Gov. Andrew Cuomo of New York is it.”

The double-standard in CNN’s treatment of the two governors is obvious and egregious. If Christie’s scandal was worthy of the huge amount of airtime CNN devoted to it, how can it possibly be argued that Cuomo’s woes don’t merit more than a single story?