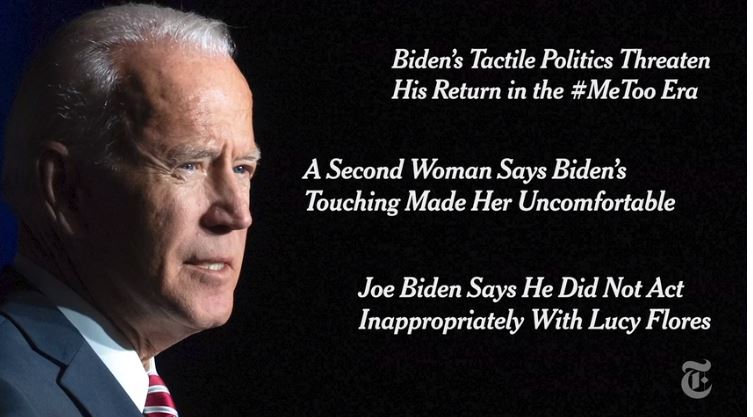 Former senator and vice president Joe Biden is officially running for president, and once again went to Anita Hill in its front-page story Friday by Sheryl Gay Stolberg and Carl Hulse, “Biden’s ‘Regret’ For Hill’s Pain Fails to Soothe.”

Hill is seen by the press as a victim of both Clarence Thomas and the all-white, all-male Senate Judiciary Committee, so there are never any inconvenient questions...like how she's a victim, and a weaithy celebrity.

She made regular appearances in the paper during the Brett Kavanaugh hearings, and been given a fresh life with Biden’s presidential announcement. Biden was chairman of the Senate Judiciary Committee during the Clarence Thomas confirmation hearings in which Hill accused Thomas of sexual harassment.

Joe Biden knew Anita Hill was going to be an issue for him. So a few weeks ago, as he prepared for his presidential announcement, he reached out to her through an intermediary and arranged a telephone call, hoping to assuage her.

It did not go how he had hoped.

In a lengthy telephone interview on Wednesday, she declined to characterize Mr. Biden’s words to her as an apology and said she was not convinced that he has taken full responsibility for his conduct at the hearings -- or for the harm he caused other victims of sexual harassment and gender violence.

Justice Thomas’s confirmation hearings in October 1991 riveted the nation, serving up a volatile mix of race and gender on national television. Ms. Hill was the reluctant witness, a young African-American law professor who had worked with Justice Thomas and was grilled in excruciatingly graphic detail by an all-white, all-male Judiciary Committee led by Mr. Biden, then a senator from Delaware.

“I cannot be satisfied by simply saying, ‘I’m sorry for what happened to you,’” said Ms. Hill, now a professor of social policy, law and women’s studies at Brandeis University. “I will be satisfied when I know that there is real change and real accountability and real purpose.”

Ms. Hill, a deeply private woman who does not often speak publicly about her experience, said she does not find Mr. Biden’s conduct disqualifying. “I’m really open to people changing,” she said.

A “deeply private” person who seems to chat with the Times once a week.

It doesn't matter in this recounting of history that polls show more people believed Clarence Thomas when he denied Hill's unproven allegations.

The general thrust was all toward appeasing the feminist and #MeToo left. It continued in Saturday’s edition with Jonathan Martin and Alexander Burns’ “Prodded for Apology to Anita Hill, Biden Says He Didn’t Mistreat Her.”

Joseph R. Biden Jr. on Friday repeatedly declined to directly apologize to Anita Hill for his handling of the 1991 Clarence Thomas hearings, using his first interview as a presidential candidate to offer a broad statement of remorse for how she was treated but refusing to demonstrate contrition about a controversy that has shadowed the start of his campaign.

Appearing on ABC’s The View, a show hosted and heavily watched by women, one day after he disclosed his call to Ms. Hill, Mr. Biden was nudged to go further and deliver a straightforward apology to her for his judgment and leadership as Senate Judiciary Committee chairman during the hearings.

Joy Behar, one of the hosts, suggested that Mr. Biden say to Ms. Hill, “‘I’m sorry for the way I treated you’ -- not for the way you were treated.”

“I’m sorry for the way she got treated,” Mr. Biden responded, haltingly. “If you go back to what I said, and didn’t say, I don’t think I treated her badly.”

Yet the matter of Ms. Hill may be a singular challenge for Mr. Biden and his campaign -- a long-ago moment not only emblazoned in the liberal consciousness as a grave historical trauma, but also represented with immediacy in the present by a living person capable of rebuking Mr. Biden in forceful language, as Ms. Hill did this week.

The Times found someone who knows something about phony allegations.

The Rev. Al Sharpton said Mr. Biden had acknowledged in a conversation this year that the Hill-Thomas hearings would be an issue for him if he entered the 2020 race. Mr. Sharpton said he had raised the subject with Mr. Biden after a January gathering of his group, the National Action Network, where Mr. Biden expressed regret for having backed certain hard-line anti-crime policies in the 1980s and 1990s.

Mr. Biden has been keenly aware of the looming issue, even if he was slow to address it, according to people who spoke with him over the last year. He has been both reflective and defensive in private, recognizing that the hearings were disastrous but also arguing that he had done his best at the time.

His demeanor was similar on television Friday.

For good measure, Friday’s lead story on Biden’s announcement falsely labeled the liberal, Republican-hostile Biden “a centrist and a determined champion of bipartisanship.”