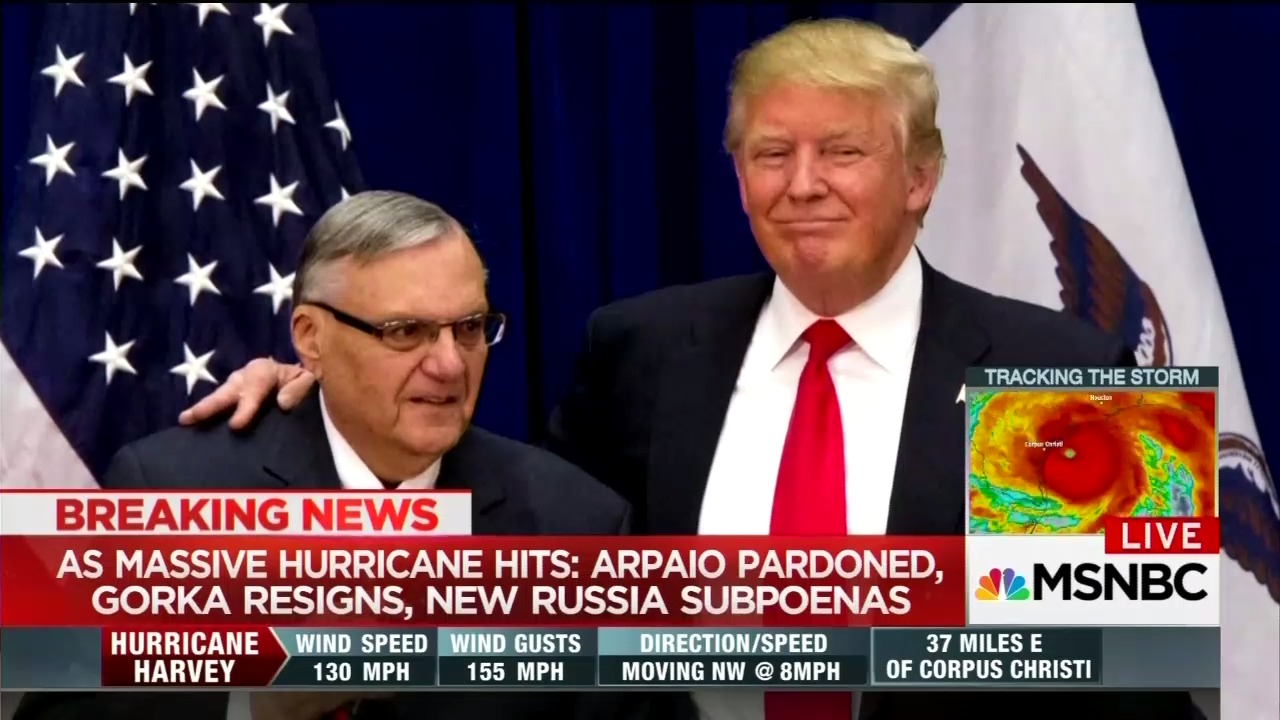 President Trump’s pardon of controversial Arizona sheriff Joe Arpaio, scourge of illegal immigrants and a promoter of the “birther” conspiracy theory about Barack Obama, made the front of Sunday’s New York Times. Legal reporter Adam Liptak began the chorus of disapproval with “President Pardon of Arpaio Follows the Law, Yet Challenges It.” Yet the same paper treated another controversial presidential action -- the commutation of military secrets leaker Bradley Manning – in quite sympathetic tones.

President Trump’s decision to pardon Joe Arpaio was characteristically unconventional. It came late on a Friday night as a hurricane bore down on Texas. It concerned a crime some said was particularly ill-suited to clemency, and it was not the product of the care and deliberation that have informed pardons by other presidents.

But it was almost certainly lawful. The Constitution gives presidents extremely broad power to grant pardons.

Nevertheless, Liptak went on for a couple dozen more paragraphs:

Last month, a federal judge found Mr. Arpaio, a former Arizona sheriff, guilty of criminal contempt for defying a court order to stop detaining immigrants based solely on the suspicion that they were in the country illegally. The order had been issued in a lawsuit that accused the sheriff’s office of violating the Constitution by using racial profiling to jail Latinos. Mr. Arpaio had faced a sentence of up to six months in jail.

Mr. Trump thus used his constitutional power to block a federal judge’s effort to enforce the Constitution. Legal experts said they found this to be the most troubling aspect of the pardon, given that it excused the lawlessness of an official who had sworn to defend the constitutional structure.

Noah Feldman, a law professor at Harvard, argued before the pardon was issued that such a move “would express presidential contempt for the Constitution.”

President Obama's controversial commutation of the prison sentence of WikiLeaker Bradley Manning was not mentioned, though there are certainly parallels in the controversial nature of both cases. Manning was convinced and sentenced to 35 years in prison for handing a trove of military and intelligence secrets to WikiLeaks for publication. Instead, Liptak pondered how the pardon could be used against Trump himself.

Other responses to pardons are at least theoretically possible. One is political: Voters can punish presidents seeking re-election for pardons thought to be an abuse of power, as Mr. Ford learned. And presidents are subject to impeachment for “treason, bribery, or other high crimes and misdemeanors.”

The pardon was swiftly condemned on Twitter by Democrats in Congress as “outrageous and completely unacceptable” and a “disgrace.”

Its timing also raised eyebrows, coming on the eve of Hurricane Harvey, a Category 4 storm, barreling down on coastal Texas. Senator Chuck Schumer, Democrat of New York and the minority leader, accused Mr. Trump of “using the cover of the storm” to pardon Mr. Arpaio and to issue a formal ban on transgender people from joining the military....

Didn’t Trump announce it at a rally days beforehand? (Which he was also roundly criticized for.)

McCain also criticized President Obama for commuting the prison sentence of Bradley Manning, sentenced for leaking military secrets to WikiLeaks, but the Times didn’t pay much attention to that act at the time.

Maggie Haberman’s solo Sunday story showed how the media would now be demanding all Republicans denounce Trump yet again. The headline to the story in the early National edition: “Ryan Becomes Highest-Ranking Republican to Criticize Pardon of Arpaio.” Haberman continued: “Outside Arizona, most Republicans stayed quiet. But Democrats laced into the president.”

By contrast, Times legal reporter Charlie Savage’s report from January 2017, on Obama commuting the sentence of the former Bradley Manning, was sympathetic and supportive, and gave little weight to opposing Republican views.

President Obama on Tuesday commuted all but four months of the remaining prison sentence of Chelsea Manning, the Army intelligence analyst convicted of a 2010 leak that revealed American military and diplomatic activities across the world, disrupted Mr. Obama’s administration and brought global prominence to WikiLeaks, the recipient of those disclosures.

The decision by Mr. Obama rescued Ms. Manning, who twice tried to kill herself last year, from an uncertain future as a transgender woman incarcerated at the men’s military prison at Fort Leavenworth, Kan. She has been jailed for nearly seven years, and her 35-year sentence was by far the longest punishment ever imposed in the United States for a leak conviction.

The two acts of clemency were a remarkable final step for a president whose administration carried out an unprecedented criminal crackdown on leaks of government secrets. Depending on how they are counted, the Obama administration has prosecuted either nine or 10 such cases, more than were charged under all previous presidencies combined.

But the move was sharply criticized by several prominent Republicans, including the chairmen of the House and Senate armed services committees, Representative Mac Thornberry of Texas and Senator John McCain of Arizona, who called her leaks “espionage” and said they had put American troops and the country at risk.

Speaker Paul D. Ryan called it “outrageous.” “President Obama now leaves in place a dangerous precedent that those who compromise our national security won’t be held accountable for their crimes,” he said in a statement.

But in a joint statement, Nancy Hollander and Vince Ward -- two lawyers who have been representing Ms. Manning in appealing her conviction and sentence, and who filed the commutation application -- praised the decision.

While there was no sympathy for the 85-year-old Arpaio from the press, Savage left lots of room for sympathy and excuses for Manning’s criminal actions, while setting the bar for his behavior quite low.

The disclosures set off a frantic scramble as Obama administration officials sought to minimize any potential harm, including getting to safety some foreigners in dangerous countries who were identified as having helped American troops or diplomats. Prosecutors, however, presented no evidence that anyone had been killed because of the leaks.

Testimony showed that she had been in a mental and emotional crisis as she came to grips, amid the stress of a war zone, with the fact that she was not merely gay but had gender dysphoria....

Savage was less concerned about the leaked military secrets than he was about Manning's hair length and access to women’s underwear in prison.

But it has not let her grow her hair longer than male military standards, citing security risks, and Ms. Manning said she had yet to be permitted to see a surgeon about the possibility of sex reassignment surgery.