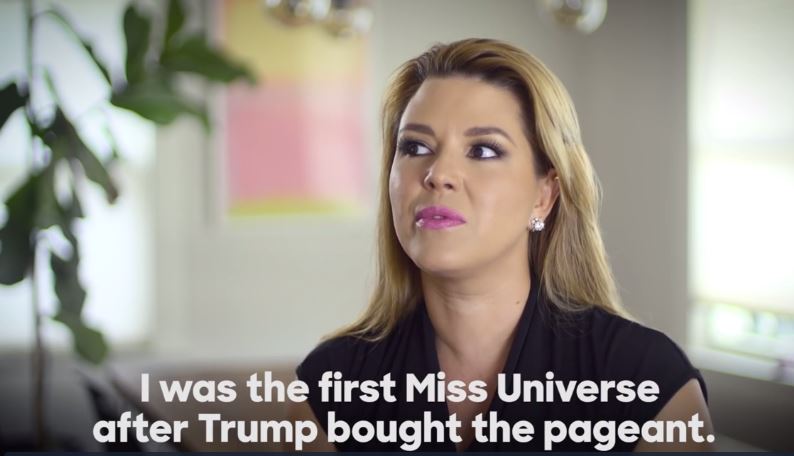 During the first presidential debate Monday night, Hillary Clinton brought up a two-decade old Donald Trump “controversy” over complaints he made about Miss Universe 1996, Venezuelan Alicia Machado, regarding her post-pageant weight gain during a time he was executive producer of the pageant.

Trump took the bait, and the New York Times and the rest of the media eagerly glorified Machado, carrying water for the Clinton campaign while burying unflattering details from Machado’s past. Republican citizens could only dream of such coverage when they dare attack Democrats.

Michael Barbaro and Megan Twohey, who teamed up for a hit piece on Trump and women back in May that included an entry on Machado, filed this wail on Wednesday: “For an Ex-Miss Universe, a New, Unwanted Spotlight -- Debate Revisits Trump’s Taunts That led to Eating Disorders and Lingering Pain.”

Actually, Machado injected herself into the presidential race on Hillary’s side months ago, giving interviews and appearing in ads, making the “unwanted spotlight” idea imprecise.

For 20 years, Alicia Machado has lived with the agony of what Donald J. Trump did to her after she won the Miss Universe title: shame her, over and over, for gaining weight.

Private scolding was apparently insufficient. Mr. Trump, who was an executive producer of the pageant, insisted on accompanying Ms. Machado, then a teenager, to a gym, where dozens of reporters and cameramen watched as she exercised.

Mr. Trump, in his trademark suit and tie, posed for photographs beside her as she burned calories in front of members of the news media. “This is somebody who likes to eat,” Mr. Trump said from inside the gym.

In the process, Ms. Clinton, the first female presidential nominee of a major party, elevated a largely forgotten tale of Mr. Trump, when his oversight of beauty pageants collided with his unforgiving fixation with female beauty.

And Mrs. Clinton put a spotlight on Ms. Machado, Miss Universe 1996, who says she has never recovered from the experience. Ms. Machado, who grew up in Venezuela, said she had had eating disorders and psychological trauma as a result of the episode.

Mrs. Clinton concluded with a kicker looking to Election Day.

“She has become a U.S. citizen, and you can bet she’s going to vote this November.”

Ms. Machado, in a series of interviews this year with The Times, recalled the experience and its long-term effect on her life for an article about how Mr. Trump treats women.

Now, Ms. Machado is an avid supporter of Mrs. Clinton. She appeared in an ad criticizing Mr. Trump. Since her setback in 1996, her career has blossomed. She is now a well-known actress in Latin America.

But the scar, she said, still remains.

“Over the past 20 years,” Ms. Machado said, “I’ve gone to a lot of psychologists to combat this.”

The Times followed up on weight-gate in a Thursday story by Amy Chozick and Michael Grynbaum, the headline even triumphantly quoting Hillary Clinton’s attack line from the first debate: “‘She Has a Name,’ and It Is Everywhere.’” The paper relegated unflattering stories from Machado’s past to paragraphs 19-21 of the 28-paragraph story.

In the final minutes of Monday night’s debate, Hillary Clinton told the story of a 1996 Miss Universe winner and how Donald J. Trump had called her names because she had gained weight. “Donald, she has a name,” Mrs. Clinton said.

Now her campaign is making certain that her name, Alicia Machado, is becoming ubiquitous.

With the Clinton campaign’s help, Ms. Machado has gone on a publicity blitz since Mrs. Clinton told her story on the debate stage at Hofstra University. This explosion of interest is the combination of a political attack that resonates with two key constituencies for Mrs. Clinton -- suburban women and Hispanics -- and a made-for-television battle between the Republican nominee for president and a beauty queen.

In 48 hours, Ms. Machado has been written about in more than 150 print news articles, referred to on TV more than 6,023 times and mentioned on Twitter nearly 200,000 times. She appeared on NBC’s “Today” show, ABC’s “Good Morning America,” CNN, MSNBC, Fox News, Univision and Telemundo.

Much like Mr. Trump’s refusal to apologize to Khizr and Ghazala Khan, the parents of a Muslim soldier who died in Iraq whom he insulted this past summer, Mr. Trump has been unrepentant.

On Tuesday, he told “Fox and Friends” that Ms. Machado had “gained a massive amount of weight, and it was a real problem.”

His response has allowed Democrats to fan their well-oiled outrage machine and turn a passing attack into a full-blown news media storm. And the story is resonating beyond partisan circles.

With the media’s eager assistance of course. It took the paper forever to slip in some of the less sanitary details of Machado’s autobiography, in as passive a formulation as possible:

At least part of the story line that has unfolded after Mrs. Clinton first mentioned her name has the eerie echo of one of the sloshy melodramas she starred in.

In the late 1990s, after her reign as Miss Universe, Ms. Machado was accused of abetting an attempted murder committed by her then-boyfriend, who shot a relative in Caracas. Ms. Machado was reportedly seen driving a getaway car, but she did not face charges. Later, the judge in Venezuela presiding over the case said that Ms. Machado had threatened him, which she denied.

Asked about the episode on CNN on Tuesday, Ms. Machado told Anderson Cooper: “I have my past. Of course, everybody has a past. And I’m not a saint girl. But that is not the point now.”

In her televised interviews, Ms. Machado seemed well-aware that supporters of Mr. Trump would seek to undermine her. “I’m not pretending to be Mother Teresa,” she said in an interview on the “Today” show on Wednesday. “I know they will try distractions about my story.”

The laudatory, kid-glove treatment of Machado is not quite the reception critics of Democratic presidential candidates get from the Times, as shown by the paper’s treatment of Joe Wurzelbacher, aka “Joe the Plumber” of Ohio, who was just an average concerned citizen not connected to the Republican presidential campaign when he dared ask a campaigning Obama a challenging question about taxes in October 2008.

Times reporter Larry Rohter took a wrench to Wurzelbacher, focusing his investigation on such vital matters as "Joe's" actual first name (Samuel) and whether or not he has a plumber's license. A photo caption sneered: "Joe Wurzelbacher, a national figure after Wednesday's presidential debate, learned Thursday that fame has two sides.” Rohter kept sneering: “...[he] may work in the plumbing business, but he is not a licensed plumber....His full name is Samuel J. Wurzelbacher. And he owes back taxes, too, public records show.”