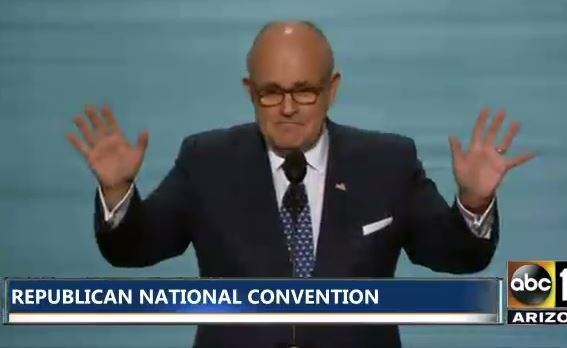 In a long article on the front of Saturday’s New York Times, reporters Jonathan Mahler and Maggie Haberman shed hypocritical tears over the risks to Rudy Giuliani’s “legacy” -- one the paper has spent over a decade doing its best to slur. The former New York City Mayor oversaw a record plunge in city homicides, led the city through 9-11, and currently advocates for Donald Trump. That last detail was the key to “Giuliani Role Risks Legacy To Aid Trump.” Post-9-11, the Times has rarely acknowledged the “legacy” of the former mayor to be anything but Hillary-hating and race-baiting.

First Mahler and Haberman pretend to miss an old kinder, gentler Giuliani that the Times has only rarely acknowledged in the first place:

Weeks after the Sept. 11, 2001, attacks, with bodies still being pulled from the smoldering rubble, New York’s mayor, Rudolph W. Giuliani, delivered an emotional address before a hushed United Nations.

He spoke with blunt force about the need for the world’s countries to unite in a global battle against terrorism. But he also sounded a powerful note of inclusion and unity, reminding the delegates -- many of them Arab or Muslim -- that New York was a city of immigrants, within a nation of immigrants.

At the time, Mr. Giuliani’s political promise seemed limitless. But after a calamitous presidential run in 2008, his once-outsize profile shriveled.

Mr. Giuliani is now back on the national political stage, serving as one of Donald J. Trump’s most prominent advisers and most vocal defenders. Once an outspoken advocate of a bipartisan immigration overhaul, he is championing a candidate who has vowed to build an “impenetrable physical wall” on the country’s southern border and severely restrict immigration from Muslim countries.

He has assumed his new role with apparent relish, embracing some of the most controversial tactics of Mr. Trump’s campaign, including its penchant for unsubstantiated assertions: Last week, Mr. Giuliani said that Mr. Trump had abandoned his insistence that President Obama was born outside the United States, even though Mr. Trump has never done so publicly.

It has been a startling next -- and perhaps last -- act for a 72-year-old politician once nicknamed America’s Mayor, and noteworthy enough for a handful of editorial pages to call him “unhinged.”

A Trump victory could open the door for Mr. Giuliani to return to public office, perhaps as head of the Department of Homeland Security or even Secretary of State.

But his ardent support for Mr. Trump could, alternatively, come at a cost to his legacy, as it has put Mr. Giuliani starkly at odds with other right-of-center Republican figures who have described the nominee as a dangerous threat to the nation and have refused to support him.

This is a source of deep concern to a large cadre of former Giuliani aides, people who recall him as the steely, compassionate leader of post-9/11 New York, and as the mayor who presided over a historic reduction in crime in the decade before -- a period when he also denounced the most extreme elements of the Republican Party, advocated stricter gun control and signed a landmark domestic partnerships bill.

Since Mr. Giuliani’s speech at the Republican convention in July, when he fulminated about the dangers of a Clinton presidency in tones that struck many as over the top, he has been a frequent presence by Mr. Trump’s side, trying to steady the Republican candidate’s wobbly campaign.

The reporters briefly noted that “Giuliani is a well-read student of history,” if only to bash Trump, who “prefers to get his information from cable news.” They then reduced Giuiliani's political stands to a personal grudge against the Clintons.

“He didn’t have a lot of use for either of the Clintons,” said Jerome Hauer, who was Mr. Giuliani’s emergency management director but later had a falling out with him. Mr. Hauer recalled having to persuade the mayor to let him give a briefing to President Bill Clinton in 1998.

Nevertheless, watching Mr. Giuliani vouch for and cheer on the divisive Mr. Trump has been jarring for those who recall the former mayor’s denunciation of Patrick J. Buchanan’s anti-immigrant presidential campaign in 1996, and his leadership of a badly shaken city in September 2001, when he grimly warned that “the number of casualties will be more than any of us can bear, ultimately.”

It is those moments that many of Mr. Giuliani’s former aides hope he will be remembered for, not his full-throated support for Mr. Trump.

“Rudy is being called on to defend the indefensible,” John Avlon, the editor in chief of The Daily Beast and a former Giuliani speechwriter, said recently on CNN. “It doesn’t reflect his best self, but it should not define him in the totality of his career.”

Yet the Times has done its best to "define" Rudy as a race-baiter. Last July, reporter Marc Santora sniffed: “As mayor, Mr. Giuliani was widely credited with helping to make New York City safer and he sought to revive those memories on Monday night, even as he avoided the more contentious parts of his legacy having to do with racial tensions that critics contend were exacerbated by both his policies and his tone.”

In February 2015, the paper played the race card while criticizing Giuliani for suggesting President Obama doesn't love America, under the snotty headline "Giuliani: Obama Had a White Mother, So I’m Not a Racist”: “Critics suggested that Mr. Giuliani’s description of Mr. Obama’s upbringing reflected a prejudiced view that Mr. Obama was different from other Americans.”

Certainly he knew such words resonated with white voters who formed the backbone of his electoral coalition. What is less certain is whether a man raised and schooled in a white world understood the force with which his harshest words rained down on black New Yorkers....Mr. Giuliani's policies, too, stirred anger. His decision to drive down the welfare rolls by cutting benefits and tightening eligibility standards and his deep cuts in social agencies infuriated many. Black voters applauded the drop in crime, but rough police tactics often inflamed tensions....The question lingers in conversation with black officials: Did Mr. Giuliani have a black problem, or did blacks just not get him?