Playing on long-established stereotypes of the melanin-challenged Republican Party, New York Times coverage of the Republican National Convention in Wednesday’s edition put racial controversies front and center, accusing speakers of lecturing and moralizing to blacks about law and order as an all-white crowd lapped it up.

The Times also pumped more air into the plagiarism controversy over Melania Trump’s speech Monday night in “How Speech for a Trump Stumbled Toward Ridicule – As G.O.P. Nominates the Businessman, His Wife’s Oration Shadows Convention,” by the notorious anti-Trump tag team Maggie Haberman and Michael Barbaro. They wrote: “It did not go as planned, and it has eclipsed much of the action at the party gathering in Cleveland, where delegates on Tuesday night formally nominated Mr. Trump for president.”

The speech certainly will eclipse the convention, if the Times has anything to say about it.

There was Rudolph W. Giuliani, the former mayor of New York, nearly shouting Monday night that the police only wanted to help people, regardless of race. A sea of white convention delegates, cheering wildly as two black speakers ridiculed the Black Lives Matter movement and unconditionally praised law enforcement officers. And a series of speakers pushing Donald J. Trump’s law-and-order message and arguing, as he has, that the United States had lost its way.

“When a lot of white Republicans get together and bring up race, even telling black people how they should see police and the world, it evokes the worst kind of emotion,” said Mr. Hill, who supports Mr. Trump but decided to skip the convention. “We have so few black Republicans to begin with. Talking about race won’t bring us more.”

For many black Republicans, the party’s convention has veered unexpectedly and unhappily toward lecturing and moralizing on issues of race, an off-putting posture at a time when Mr. Trump is staggeringly unpopular with minority voters. He drew support from zero percent of African-Americans in recent NBC News/Wall Street Journal polls in Ohio and Pennsylvania, and he is struggling badly with Hispanics, partly because of his harsh language about Mexicans and immigrants.

And those who did speak from the podium seemed focused more on castigating black protesters, scolding other blacks for their behavior and exalting Mr. Trump than on trying to help Republicans make inroads with undecided or skeptical black voters.

“Somebody with a nice tan needs to say this: All lives matter!” declared Darryl Glenn, a commissioner of El Paso County, Colo., who is African-American, in a line that drew a thunderous ovation from delegates.

Mr. Glenn repeatedly struck a moralizing tone. “If we really want to heal our communities, more men need to start stepping up and taking care of their children,” he said at one point. “Safe neighborhoods happen when fathers and mothers are in the home,” he said at another.

The NYT harped on the lack of racial balance on the convention floor:

Though Mr. Carson and Mr. Glenn were enthusiastically received, their overtures to blacks seemed all the more discordant given the racial makeup of the audience in the convention hall here.

This convention has fewer black delegates and speakers than any in two decades, according to several African-American Republicans who are regulars at party gatherings. The Republican National Committee could not provide definitive counts of delegates by race; one party official estimated that there were 80 black delegates, but that was based on an informal crowd count that might have included people on the convention floor who were not delegates. There are 2,472 delegates in all.

Fred Brown, the chairman of the National Black Republican Council, said he had been going to Republican conventions since the 1970s and believed that this year’s convention was one of the whitest in memory. 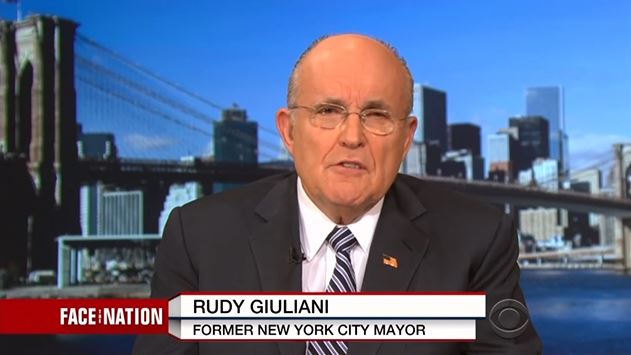 The speech by Mr. Glenn, and Mr. Giuliani’s hand-waving turn on the stage -- in which he seemed to condemn people who held negative views about the police -- were among several moments at the convention that unnerved some Republicans.

Another came when David Clarke Jr., the sheriff of Milwaukee County, declared that “blue lives matter” and argued that the Black Lives Matter movement was contributing to “a collapse of social order.” He also praised the acquittal of one of the Baltimore police officers charged in the death of Freddie Gray. (Efforts to reach Mr. Glenn and Mr. Clarke on Tuesday were unsuccessful.)

Some Republicans said privately that they were uncomfortable that convention planners had tapped black speakers to chastise black protesters in front of a mostly white crowd, which seemed to lap it up. But others, like Mr. Brown from New York, said it was a “farce” to say that African-Americans like Sheriff Clarke were being cynically used by Republicans to deliver stern rebukes to people of their own race.

Former Mayor Rudolph W. Giuliani stood before the nation, fists clenched, eyes wide and arms cast to the heavens. His message, on the opening night of the Republican National Convention, was as clear as it was apocalyptic: The world is full of danger and terror.

For Mr. Giuliani, his spotlight appearance was something of a full-circle moment for a man who rose to power as a federal prosecutor, and then became the first Republican mayor of New York since John V. Lindsay, seizing on high crime and joblessness rates.

His profile soared after the Sept. 11, 2001, terrorist attacks, becoming “America’s mayor” to some, helping to heal a wounded city and nation, and warning against being guided by anger.

Santora really worked Giuliani over for “tapping into fear,” as if fear was not a credible response to terror threats.

He did not deny that he was tapping into fear, but said it was a fear that exists and must be addressed. “I think fear is a legitimate feeling,” he said.

Now, he said, the nation faced a different peril, adding that his speech had not stoked fear, but addressed the legitimate fears of the public.

He acknowledged that the news in recent weeks -- dominated by police shootings and terrorist attacks -- fueled his anger but did not change his core principles. “I take these things very personally,” he said.

Even observers not reflexively critical of Mr. Giuliani were surprised by how much his words were animated by a seething emotion.

Santora repeated the Times’ decade-long drumbeat of “Rudy the racist” continued, in a fainter tone.

As mayor, Mr. Giuliani was widely credited with helping to make New York City safer and he sought to revive those memories on Monday night, even as he avoided the more contentious parts of his legacy having to do with racial tensions that critics contend were exacerbated by both his policies and his tone.